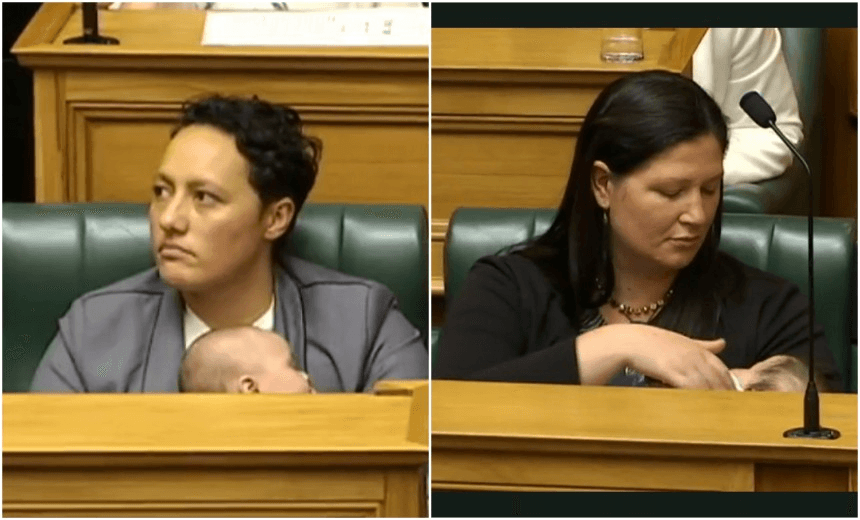 I left parliament because I couldn’t be an MP and a mother. This week has given me hope

Holly Walker, former Green MP and author of a memoir of being a mother in parliament, says this week’s images of babies in the debating chamber indicate a new attitude to working mothers in politics. But there’s still a long way to go.

When I was an MP and pregnant with my first child, people would send me images of the Italian EU Parliament member Licia Ronzulli holding her daughter in the chamber. I found them inspiring and encouraging, and dared to think that in a few months, my baby and I might be the subject of similar images from the New Zealand Parliament.

It wasn’t to be. My daughter Esther was a refluxy, colicky baby. If I had tried to breastfeed her in the chamber she would have screamed the House down and vomited all over my papers. Also, while there was no overt rule at the time against a member bringing their baby into the House (indeed, Katherine Rich had done it in 2002), the implied message from the Speaker and Business Committee at the time was that they hoped it would not be necessary if I had other places to feed and express milk. I was an anxious, sleep-deprived wreck for the nine months I lasted as an MP after my daughter was born (I wrote about this in my book The Whole Intimate Mess), and I didn’t think I would survive the exposure of attempting to take my baby into the chamber if it all went pear-shaped.

Bittersweet then, for me to see images this week of the new Speaker not only openly expressing his wish to make Parliament more family-friendly, but actually holding a member’s baby during a debate, on a bill to extend Paid Parental Leave, no less. It’s a beautiful thing, as is the idea of Parliament’s messengers (some of the nicest and most discreet people you will ever meet) delivering hungry babies to their mothers in the chamber. It makes me wonder what it might have been like if I was still an MP having my first baby in this parliamentary environment. Perhaps it would have been a little easier.

Then again, I’m writing this while standing at my desk at home, with my five-week-old second daughter, Ngaire, strapped to my chest, and I am pretty happy not to be in Parliament right now. Ngaire is about the same age as the babies of Labour MPs Kiri Allan and Willow-Jean Prime, and I find it hard to imagine doing what I am doing now (a repeated cycle of breastfeeding, burping, nappy-changing, walking her to sleep, and shoveling Mee Goreng noodles and Milo from the jar into my mouth before she wakes) while also navigating life as a brand new MP. I salute these brave women, and the armies of people who are supporting them to do this. And I hope they are eating healthier snacks than me.

Debates about the family-friendliness of Parliament seem to centre on the question of breastfeeding in the House. Indeed, a tweet from the NewsHub Politics account a few days ago suggested that Speaker Trevor Mallard’s stated intention to make Parliament more family-friendly was “job done” already simply by the fact that Willow-Jean Prime was feeding in the House. In my experience, when and where the baby gets fed is just the tip of the iceberg. If we are to achieve a genuinely family-friendly Parliament, one in which babies are no barrier and members get to be the kind of parents they want to be as well as thriving in their political careers, there are some other things we could think about.

Babies get bigger, faster. When they are past the stage of feeding and sleeping on their mums all day, who will take care of them? The Parliamentary childcare centre has a long waiting list for a place (even for MPs), doesn’t take babies before six months of age, and is not open late at night while Parliament is in session. To my knowledge, it’s rarely used by MPs, and is more often a resource for the children of staff and the general public.

Wouldn’t it be great if MPs could run on a joint ticket and job-share? It would be a win for the public, who would get two skilled representatives for the price of one, and a win for the MPs and their families, who would get to be more flexible about the hours worked, time spent in Wellington, and fulfilling their care responsibilities.

Similarly, why aren’t we making the most of the fact that we have a list-based system to allow MPs to take extended parental leave of up to a year (like the rest of the country can) while being replaced by someone off the party list? This also seems like a win-win – flexibility for the MP, plus invaluable on-the-job experience for an up-and-coming politician – and could be used not only for parental leave, but for MPs experiencing personal illness or caring for a sick relative.

Perhaps it’s time to review the hours/days/weeks that Parliament sits for their family-friendliness. For many years now Parliament’s recesses have coincided with the school holidays, which is great, but it’s still pretty incompatible with family life, especially with young children. For MPs in Wellington, the House sits until 10pm, meaning no bathing your kids or reading them bedtime stories (though to be honest, with a tyrannical four-year-old, the idea of missing the dinner/bath/bed witching hour is pretty appealing to me at the moment). For those outside of Wellington, which is most of them, there’s the fact of travelling away from your family for three days of the week, 30 weeks of the year. Other Parliaments do this differently – Australia’s federal Parliament only sits about 20 weeks of the year, for example, but for five days a week. I’m not sure which is better, but maybe we should sit down with some MPs and their families and figure out if we’ve got it right.

There are other little parliamentary hacks that would make a big difference too, like granting MPs with babies leave from evening sitting sessions without affecting their parties’ numbers in the House (something that was kindly extended to Nanaia Mahuta and myself during the 50th Parliament), and formalising the emerging convention that MPs can take the same number of weeks of parental leave as are available to the general public. Matters like these can and should be considered by Parliament’s Standing Orders Committee, and I’m extremely encouraged that Speaker Mallard has indicated his willingness to make changes in this area.

Watching these mums with their new babies and the new warm fluffy Trevor Mallard (it’s not just for the cameras; he recently dropped around four frozen pasta meals to my house and they were delicious) gives me a great deal of hope for the future. But to be perfectly honest, even if all these changes were made, I still wouldn’t go back to Parliament with a brand new baby. Five weeks into my second time around, I’ve had no symptoms of post-natal depression or anxiety, despite the lack of sleep, a fairly horrendous bout of mastitis, and the added complication of doing it all with a rambunctious older child. I put this down in no small part to the fact that this time I’m watching Parliament from my couch and not from a seat in the House.