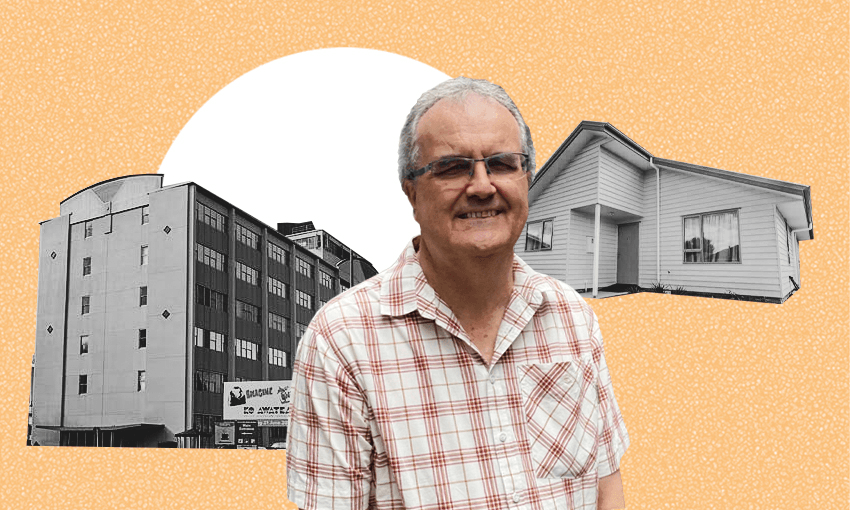 He quit politics to care for a wife who had suffered a brain haemorrhage. Today he holds leading roles at the apex of the two great challenges facing South Auckland: housing and health. Vui Mark Gosche tells Justin Latif why a change is coming.

He is one of the most powerful people in South Auckland.

Not only is he chair of Kāinga Ora, the government’s multi-billion-dollar public housing arm, but he also chairs the Counties Manukau District Health Board, which delivers public health services for over 560,000 people across south and east Auckland.

His CV is just as formidable. He served as a Labour MP from 1996 to 2008, becoming the first cabinet minister of Pacific descent, holding the portfolios of corrections, housing, transport and Pacific Island affairs during the fifth Labour government. Just prior to leaving politics, was bestowed the chiefly matai title of Vui. After departing parliament, he took up a number of governance and advisory roles, as well as taking the reins as chief executive of Vaka Tautua, a national health and social service provider for Pacific peoples. But his life has also been marked by heartache, having lost a son to suicide and coming to terms with his wife’s severe disability following a brain haemorrhage.

When we meet in a poorly lit empty classroom in Middlemore Hospital’s Ko Awatea building, Vui Mark Gosche admits the workload means he’s barely had any time off over summer, other than a few days “here and there”.

The Covid-19 crisis sharpened the focus in 2020 on South Auckland’s stretched health services and housing infrastructure. In 2021, those challenges aren’t going away.

However, says Gosche, Covid-19 has also shone a light on the ways government agencies can work better with South Aucklanders.

“The community was really good at doing what was needed to be done, and a lot of that was driven by Māori and Pacific, who stepped up into roles that no one else could do and they delivered,” he says. “So that also gives a great deal of incentive for government agencies to build on that.”

From groundsman to chairman

But don’t confuse Gosche for some governance groupie who’s slipping from one wood-panelled boardroom to another. The 65-year-old was born in Ōtāhuhu to a Samoan baker and a Pākehā mum, growing up with his six siblings less than a kilometre from Middlemore Hospital. Out of high school he tried a number of jobs in the area, including a stint as a groundskeeper at Middlemore’s spinal rehabilitation facility in Ōtara. He says his current roles are in some way a continuation of a whole career dedicated to serving South Aucklanders.

“I’ve always liked working in my community,” he says. “My first job was as a cadet reporter for the South Auckland Courier and I then worked for a union which had a huge numbers of members living in South Auckland. I’ve lived in South Auckland for more than half my life, and it is who I am. So when you get the chance to work for the community, you jump at it, because it’s what drives me.”

While the DHB and Kāinga Ora are quite different in how they operate, Gosche says both organisations can make a significant difference to inequality in New Zealand.

“A personal goal for me is to make a big dent in the inequity statistics, which in the end are real people missing out on the sort of healthcare [and housing] they should be getting as a right,” he says.

“It’s about ensuring the others who come after us get the same opportunities, so they can do whatever they put their minds to. That egalitarian society that I was born into has very much changed for the worse, so you’ve got to keep battling to address that imbalance.”

The battle has a personal element to it as well.

In 2002, while Gosche was minister of housing, his wife Carol suffered a brain haemorrhage, resulting in her needing ongoing daily care. In 2007, his son Kristian committed suicide. In a 2018 interview with E-Tangata’s Dale Husband, he said: “That really was the tipping point. Should I remain in politics? The answer was clearly “no”, because we had other children, and grandchildren coming along, too.”

He says his journey supporting his wife has given him a unique insight into navigating the health system.

And in his Kāinga Ora role, he sees it as a chance to re-engage with an organisation he once led as its minister.

“This has given me the opportunity to carry on [from my time as minister] with what I think housing is, which is one of the keys to our society,” he says. “And that is so very evident now, given how many people are locked out of home ownership and how difficult it is with getting into affordable rentals.”

The challenges ahead for both organisations are immense. Despite the government building more public houses than ever before, the waiting list for a home has swelled to more than 22,000.

For Counties Manukau DHB, the issues are just as daunting, with the hospital experiencing full wards throughout the usually quieter summer period, coupled by the fact that more morbidly obese people live within its boundaries than in any other district health board in the country.

Gosche says part of the answer to these issues is through forming stronger partnerships with Māori and Pacific providers and community organisations.

“There’s a very strong need from a moral and legislative sense for much greater partnership with Māori on housing. And when I do finish [my term on the DHB], I would like to see better, more resourced and much more capable Māori and Pacific health services, both within the DHB and in the community.”

He says there is a real opportunity to reduce the pressure on frontline services if Māori and Pacific health providers are funded to focus on prevention measures.

“The system [currently] treats you as an individual,” he says. “You turn up to your doctor and you’re told, ‘you should stop smoking, you should stop doing this and do that’. You don’t get treated as a person who lives in the household, as if that household doesn’t have any effect on your behaviour. So as an organisation we have to look at funding things on whānau basis, and you’ve really got to get the whole family to change, not just the individual.”

Gosche would also like to tackle the unconscious racism that exists within our social and health services.

“To get on top of the inequitable access to care means you also have to deal with the inherent racism within the system. It shows up in all the statistics, but you can’t just explain it with a simple answer.

“One example is that some GPs prescribe gout medicine to this person but not to that person who happens to be Māori or Pacific. What is the bias? I have absolutely no idea why people in a prescribing role, for instance, prescribe quite differently from one race to another.”

To tackle this, along with the plethora of other pressing needs, Gosche says it starts with changing things from the top.

“Appointing our first Pacific chief executive, Margie Apa, was a very special thing. And she’s appointed other key people into senior roles, which illustrates that if you’re going to make change, you have to have the right people who come from the community they serve.”

Another factor in changing the outlook for South Auckland is ensuring public services are funded at a level that matches its population, which can only happen if the census accurately counts it.

“I was appalled at the last census,” Gosche says. “There was just nothing [in terms of community engagement], it was appalling. Even in my own household, which is multi-generational, because they had such a hopeless online programme it probably took an hour and a half. A lot of other people would have just given up.”

He says over the last few years, DHB staff have been working closely with ministry officials to have this problem acknowledged.

“They’re accepting it as we understand it, which is a breakthrough. I think the undercount is about 12,000 people, which translates to over $32 million a year. We’re going to have a $29.2 million deficit this year. We’re going to really struggle to [break even] because the money we should be getting isn’t paid to us.”

Another way to save money would be to reduce the numbers suffering from preventable illnesses like diabetes. Gosche himself is on the cusp of a diabetes diagnosis and it’s another driving factor for him to make sure others with similar issues don’t become chronically ill.

“I’m in a constant personal battle to lower my sugar levels, otherwise I’ll get diabetes, and it comes with the territory of being part-Samoan. I’m also on the gout pills. Then you look around your family and it seems many are in that situation.

“As a user of health services, it always gives me insights that if I find the system difficult, what must it be like for people who don’t have the skills that I have? And it reminds you that there’s a heck of a lot we could be doing better – and that’s a good motivating factor for anyone in a governance position.”