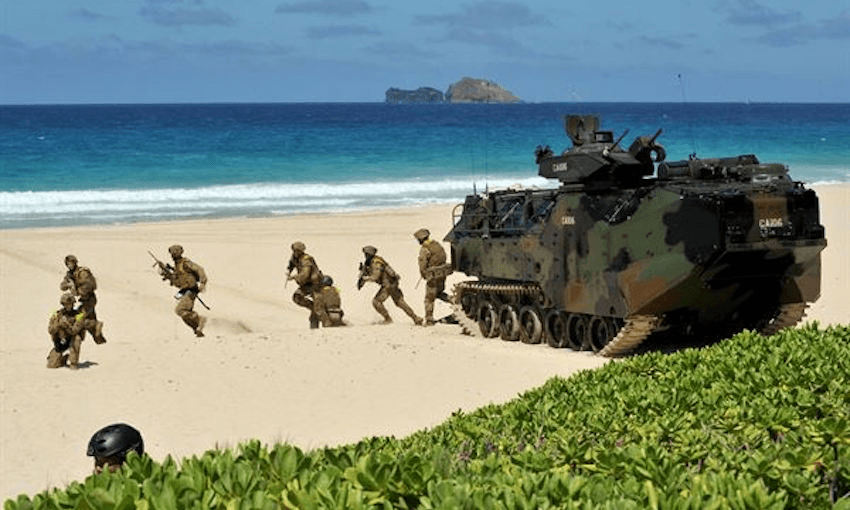 By Emalani Case
Guest writer
Made possible by

The biennial Rimpac military exercises in Hawai’i devastate the environment and disregard the rights of its Indigenous people. New Zealand should not participate, writes Emalani Case.

When I was growing up, I learned the 3 Rs. Yes, Reading, Writing, and Arithmetic, and lessons in how to Reduce, Reuse, and Recycle were part of my school’s curriculum. But, those aren’t the Rs I’m talking about. I also learned the 3 Rs of Explosives Safety: Recognise, Retreat, and Report: recognise when you’ve stumbled upon unexploded ordinance, retreat immediately, and report it to an adult.

I grew up in Hawaiʻi in a small town called Waimea. Whenever I say this, people smile, imagining palm trees, white sandy beaches, perhaps a few hula maidens and surfers, and lives that must be good because they’re being lived out in “paradise”.

What people don’t imagine when they think of Hawaiʻi are bombs, submarines, tanks, military attack helicopters, and live-fire training. What they don’t imagine are the large tracts of land that were stolen from Hawaiian people and then used by the US military. They don’t imagine ongoing colonialism and certainly don’t imagine military occupation.

I begin with these reflections because the picture of paradise that dominates imaginations around the world operates to conveniently disguise the fact that Hawaiʻi is like other parts of the Pacific in being deemed expendable by colonial powers, or only seen as valuable for how they can be sold, used, and abused. I also begin in this way because the normalisation of militarism continues, even in the time of Covid-19.

As New Zealand has moved through various Covid-19 alert levels, I’ve been spending a lot of time thinking about so-called “norms” and about what it means to be Indigenous in a global pandemic. Though now-popular narratives have often tried to put all of us into the same metaphorical lockdown bubble, all “fighting” this disease together (the allusions to war being both frequent and problematic), the truth is that Covid has impacted, and continues to impact, some people disproportionately. This is because colonialism, racism, and militarism do not end or take quarantine naps in a global crisis. They don’t move through alert levels and make adjustments. Instead, they take on new guises and continue to impact in increasingly cruel and deceptive ways.

All of this is no more apparent than in the current effort to cancel Rimpac, the Rim of the Pacific maritime exercise scheduled to take place in August of this year. Hosted every two years in Hawaiʻi by the US Navy’s Indo-Pacific Command, Rimpac is international, bringing together nations from around the world to simulate war exercises. In 2018, Rimpac drew in representation from 26 nations. Together they brought 46 ships, 200 aircraft, five submarines, and over 25,000 personnel.

New Zealand was one of those participating nations, sending over 300 defence personnel to Hawaiʻi’s lands and waters. In April, an open letter was sent to prime minister Jacinda Ardern urging her to withdraw New Zealand’s participation in Rimpac this year, citing concerns about the exercise being held during a global pandemic, while also highlighting the devastation it causes every year.

Rimpac is highly destructive. It pollutes and contaminates our lands and water, it threatens wildlife, and it puts a strain on Hawaiʻi’s already fragile ecosystems. Every year, it results in an increase in toxic waste, noise pollution, and unnecessary, preventable damage. It also contributes to the ongoing dispossession of Indigenous lands. This year, all of this is to take place again, only this time with the added stress and uncertainty of Covid-19.

Rather than being cancelled, however, Rimpac 2020 has been altered, with the US Navy now saying all training exercises will be “at-sea-only”. Though war simulations may be restricted to the ocean, this does not mean people will not be coming to land. Logistics teams and other support personnel will come ashore, and with over 20 participating nations this could still result in hundreds of international visitors. The promise of “at-sea-only”, therefore, does not, and cannot, promise safety.

Thankfully, Hawaiʻi’s people are not alone in demanding the cancellation of Rimpac, this year and every year. The recent open letter delivered to the prime minister, for example, is indicative of a growing solidarity among those who want to put an end to these biennial war games. As a Hawaiian woman currently living and working in New Zealand, I find this comforting. I find it reassuring that there are people, both Indigenous and non-Indigenous, who see us and who care.

Unfortunately, minister of defence Ron Mark did not agree with the many people who signed the letter. He responded that Rimpac is essential because it allows the NZDF to train with other nations and argued that the exercises prepare troops for more than just security operations. As an example, he mentioned the delivery of aid to Pacific peoples in Vanuatu, Fiji, and Tonga in the wake of Tropical Cyclone Harold, essentially using our Pacific relatives as an excuse for war games. In doing so, he not only perpetuated the racist framing of them as dependent aid receivers, but also used the issue of disaster relief while ignoring New Zealand’s own complicity in creating disaster in Hawaiʻi.

Since his response, the NZDF has confirmed they will be participating in Rimpac 2020 by sending the HMNZS Manawanui, a hydrographic dive vessel that can carry a crew of up to 66. Though this may seem small and inconsequential, participation still signals disregard for the safety and wellbeing of those in Hawaiʻi who will have to once again bear the pain and destruction of Rimpac, this year amid a global pandemic.

As we move through the alert levels and adjust to new norms, we have the opportunity – or rather the responsibility – to question, challenge, and dismantle the structures that have normalised destruction  and the ongoing racist disregard of Indigenous peoples. This starts by looking down at the lands we stand on, recognising how our lives have been made possible by the dispossession of tangata whenua, and then using that recognition as a chance to support sovereignty here. We have the opportunity and the responsibility to get out of our isolation bubbles to see how we’re connected, to see how militarism here in New Zealand, for example, contributes to disaster in Hawaiʻi.

Finally, we have the chance and the responsibility to envision and build better futures that are grounded in a different set of Rs. I’d like every child to know Resistance, Resilience, and Restitution. If Covid-19 has taught us anything, it is that we are capable of quick and drastic change. While Ron Marks’s response was disheartening, we will continue to push forward, both here and in Hawaiʻi, calling for the cancellation of Rimpac and dismantling the structures that enable it.