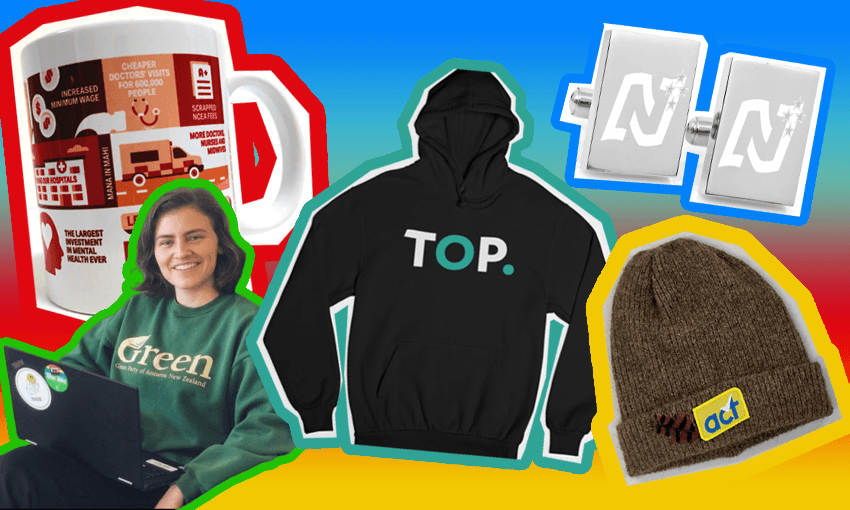 A guide to the best political party merch for election 2020

Looking to wear your political affiliations on your sleeve? Eli Matthewson takes you through your options.

As the news of the controversial “Green School” funding broke, I could think of only one thing: how almost everyone I follow on Instagram had already bought the Green Party jumper.

At the start of the worst week for the Green campaign, hoards of millennials forked out $75 apiece for a replicate of a jumper originally owned by party stalwart Danna Glendining and made famous on Instagram by MP Chlöe Swarbrick. Swarbrick’s Instagram comments seemed as hungry for the jumper as they were for systemic change, and after months of mounting hype, the “Chlöe” sweater went online and had 800 orders in just a few hours. You can only imagine the 800-person group chat these (presumed) Grey Lynn and Wellington central residents will have to create to work out who’s allowed to wear it on what day.

Part of the jumper’s appeal is its exclusivity, which is an integral part of what makes fashion “cool”. But instead of burning excess stock a la Burberry, the party has taken a characteristically greener approach by filling orders and making them ethically from a fabric in limited supply, which may take a while. They’ll then, presumably, be shipped ethically, cast down a river in a wicker basket, Moses style.

But if you’re desperate for some 2020 election merchandise that’s guaranteed to actually arrive before the big day, not to worry: most of the major parties have shops on their websites packed to a very shallow brim. Unsure of what to buy? Lucky for you, I’ve picked out the best of the bunch.

Keep things moving all the way from the kettle to your desk with this Labour Party mug. Adorned with the party’s biggest achievements from its first three years in charge, this mug is fortunately big enough to contain them all! For just $15 this mug can hold some delicious coffee, giving you a fresh and exciting start to your day that ultimately might not provide everything you thought it would.

What they should replace it with: I’m a fan of the mug, but what if it was a magic one that held all the ambitious goals the party once had, but they disappear when you pour in hot water and are replaced by the face of Winston Peters?

While National doesn’t have a merch store on its website, the Young Nats seem to have stock of a 2017 fundraising item that will absolutely appeal to your everyday New Zealander. Sitting at a cool $50 (not including the cost of purchasing a shirt that accommodates said cufflinks), these steely squares are a great way to promote the party to anyone within 30cm of your wrist. Remember turning 21 and getting a pile of cufflinks you now keep in a box in the cupboard? These could go in that box!

Grade: Zero lunch breaks out of a possible five.

What they should replace it with: A “Strong Team” shirt with Gerry and Judith’s faces, but attached with velcro so you can replace them with Nikki and Todd for a throwback, or Dr Shane and Chris Luxon for a throw-forward (maybe have the entire list just in case).

Although a little steep at $80, this hoodie’s real value is that it has a little – forgive the gay pun – versatility. Because it doesn’t say “The Opportunities Party” and because I don’t think TOP’s logo has been absorbed into our collective consciousness fully, no one need know this ever had anything to do with the election. This hoodie can have many new meanings. You could get “Bottom” printed on a pair of trousers and the logo could instead be an indicator for where the item of clothing goes. If you’re a boss, it could be great for when you’re working from home and you want to look casual on Zoom but still proudly display your position. And if you’re gay, you could wear this to a party to indicate your adherence to a strict binary of sexual roles possibly as a result of internalised homophobia.

Grade: Three Tops out of 20 Bottoms.

What they should replace it with: A TOP keep-cup to use at their pop-up cannabis cafe that only has coffee and does not, in fact, have any cannabis.

OK, this $45 “Weka Weka Woo” beanie has a lot going for it. I love the gruff, tramping-vibe wool and how all the proceeds go to support the conservation of the weka. Probably its greatest positive, though, is it does look like it would be very easy to remove the Act logo if your party allegiances change and you want to libi-tear it off.

What they should replace it with: David. Seymour. Twerking. Undies.

Possibly the most affordable item on any party’s websites is this New Conservative tote that could be yours for just $5. This tote is perfect to use as a handbag if you’re invited to a gay wedding and want to show your opposition to the occasion while still getting the free food. Plus, it’s perfect for putting over your head when people accuse the party’s Treaty policy of being flat-out racist!

Grade: One firstborn son out of a possible traditional nuclear family.

What they should replace it with: I say keep the tote, but maybe get ahead of the inevitable and update the logo to “Newer Conservative” for 2023.

(Ed’s note: Unfortunately, this tote bag is no longer available on the New Conservative website. Must’ve been very popular.)

I looked and I looked but there was no NZ First merch in sight. However, I do have an idea: Rogue Winston. In the lead-up to the election, put Rogue Winston in different places throughout the house like he’s Elf on a Shelf – each time contradicting his coalition partners more than the last! Put him at the border of your house to announce a quarantine breach that didn’t happen, hide him in your safe to block a capital gains tax. Then make your kids, partner, or sober self find him!

Grade: I think they should pay me 10 grand for this idea.