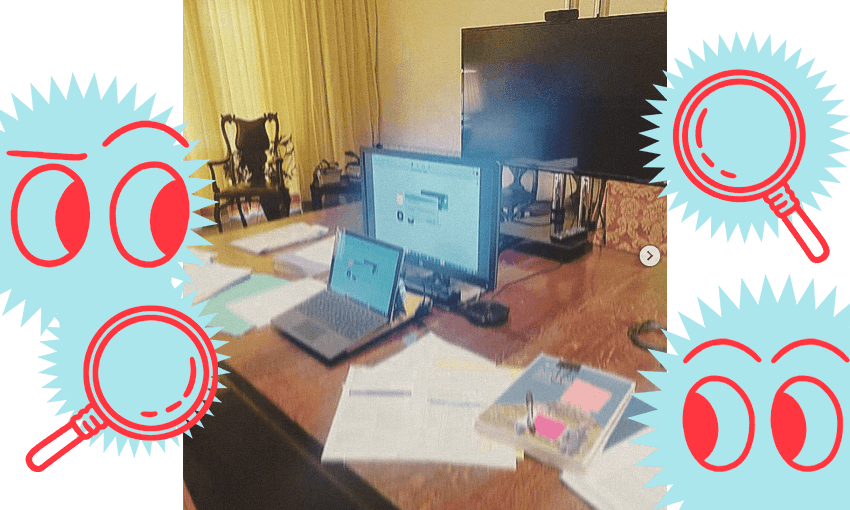 A recent Instagram post from the PM revealed her work-from-home setup – and frankly, we’re a little worried.

On Monday night, our prime minister revealed the first ever case of Covid-19 found inside a camera lens. Jacinda Ardern’s fiancé Clarke Gayford tested positive last week, plunging their household into isolation – and now the virus has stricken the below image, posted to Instagram on Monday night. Ardern alleges the photo is of her work-from-home setup. If this is true, she’s working from whichever overlapping realm ghosts live in.

I have been asked to analyse the contents of this image and figure out if Ardern is OK. I am not sure anything is in focus enough for me to identify, but even this is enough to deduce she might not be OK.

My first thought is the blurring could be caused by superspeed, because Ardern has been very productive. According to the Instagram caption, her Monday started with media interviews and a Zoom with “officials” (the priests exorcising her work setup perhaps), continued with a weekly Covid debrief and a Cabinet meeting, and ended with one last meeting “on health reforms” (regulating astral realm health and safety).

“I’m now working on a pre-budget speech for Wednesday, and enjoying the quiet in our chaotic lounge,” she wrote. Is this the lounge where she’s writing the pre-budget speech? Is that shadowy chair of spines what she sits in to enjoy the quiet? Surely not.

I believe this chair is possessed by prime ministers past. It may have once been healthy wood, but it has since journeyed to the underworld and necrotised before being spat out inside Premier House so it can watch our leaders write pre-budget speeches. The sun cannot shine past the Hellchair. So long as it watches from its corner, the prime minister is trapped in budget limbo with two monitors, one pen and a dream. Did this chair give Gayford Covid-19? Anything seems possible.

The prime minister offers some explanation for what we’re seeing in the second image, which reveals a stash of papers, a keyboard and a mouse scattered under the table. “Actual work from home set up featuring all the papers that were stolen by my 3 year old work mate today,” she writes in the caption.

Wait. Does this mean the actual work from home setup is the one under the table? On top of the table, two screens. Underneath it, a mouse and keyboard. There are papers in both locations. Did Neve steal the ones above, or the ones below? The only reasonable conclusion: our prime minister has developed an elite distraction-free working method which involves hiding under the table and typing without a monitor. Neve has learned to read already, and watches the monitors to confirm her mum is on task.

There is no way to enhance the image. The closer you get, the more blurred it becomes. This has to be intentional. As stated in her caption, the budget is next week; I believe everything on this table is budget-related, and has to be unparseable by the public’s prying eyes. If the shocking image quality is on purpose, this is the future of infosec. The prime minister is doing more than OK – she’s brilliant.

All these questions have been put to the prime minister’s office, and we hope to bring you answers shortly. In the meantime, it’s safe to assume that so long as Ardern is still posting, the chair has not yet eaten her soul.