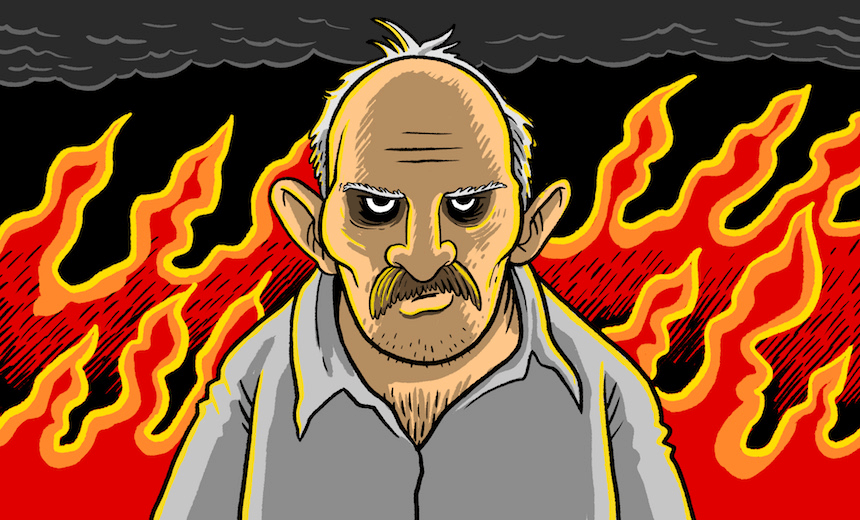 ‘Another day where it feels embarrassing to be associated with TOP’: the email which enraged Morgan

The Spinoff has obtained the email which prompted TOP leader Gareth Morgan to tell one of his candidates to resign for being a ‘pain in the arse’. Don Rowe looks back on another chaotic week for TOP. Illustration by Toby Morris.

Gareth Morgan, currently holidaying in Cuba, has still managed to live in the news back home all week. First it was for lecturing the public about their misplaced mourning for the prime minister’s cat Paddles, who died on Tuesday. Yesterday it was for telling concerned former list candidate Jenny Condie she was a ‘pain in the arse’ who should resign, before cancelling her TOP email address. Mt Albert candidate Dan Thurston resigned in solidarity, and sources suggest more resignations are expected over the weekend.

“Gareth’s comments about the death of the Prime Minister’s cat were the top story on Stuff yesterday,” Condie wrote in her email, which she has supplied to The Spinoff. “They have also been covered by TVNZ, NZ Herald, National Business Review and others… I and many others experienced this uncomfortable feeling before – this feeling of having to support embarrassing behaviour we don’t agree with, either through actively defending it or through remaining silent.”

Condie had voiced concerns held by her and many others around Morgan’s divisive behaviour during and after the election, and his seeming disregard for the efforts of the volunteers who flocked to TOP’s policy-based manifesto. The final straw was Morgan’s handling of the death of Paddles Ardern-Gayford.

“Was it out and about wandering?” he demanded of the Newshub twitter account. “If so does this reflect the value the PM puts on NZ wildlife?”

People cried out for a bit of empathy, decency, or just some plain political common sense. Morgan was not for turning. “Understand u fragile flowers of Twitter-wandering cats whether called Moonbeam or Paddles, r pests. We need PMs with conservation integrity,” he tweeted in response.

But it wasn’t only the fragile flowers of Twitter who were upset. Behind the scenes, TOP members – already concerned with Morgan’s behaviour both in public and in the shadows – had had enough. Dr Jenny Condie emailed her party leader expressing her displeasure on behalf of both herself and others within the party.

“It is not merely Gareth’s comments themselves – these are a reflection of the culture that exists within the party. There is a mismatch between our policies and our culture: between what we say we want to accomplish and how we actually behave. This mismatch makes us untrustworthy in the eyes of the public,” Condie wrote.

The response: “Hi Jenny – please just resign from the party – you’re a pain in the arse. Ka kite ano, Gareth.”

Like many of the academics who flocked to TOP, Condie was attracted by the much-touted evidence-based approach to policy, regardless of the eccentricities of the man holding the chequebook.

“I was really excited by the radical honesty,” she says. “It was about policy over popularity, and speaking some of those unpopular truths. I knew Gareth had a way about him, but I gave him the benefit of the doubt.”

(When asked for his comments on the episode, Morgan replied via email: “I’ll be talking to media about it (if its attention span is that long) on my return from Cuba – early December.. Until then best of luck not making the news too fake.” He also attached an image which he had tweeted earlier in the week.)

According to Condie, the first major sign of trouble was the ‘lipstick on a pig’ episode.

“We knew there were issues with public relations and there was a lot of robust internal conversation, but during the campaign there’s just no breathing room to deal with it. I considered resigning at the time of the whole ‘lipstick on a pig’ thing, but ultimately I decided that it would do too much harm to the hopes of all the volunteers and all the people who had put time and energy in TOP.

“Someone like Kennedy Graham obviously feels as though he stuck to his principles resigning from his party, but there were consequences to that too. I made the decision to stay hoping that after the election we could deal with some of these issues. That obviously hasn’t happened.”

To everyone involved, Morgan’s latest outburst – and the fallout – seemed like just another case of bad deja vu.

“It was a rinse and repeat of the ‘lipstick on a pig’,” says Debbie Watkins, campaign manager for Condie and Ohariu candidate Jess Doube. “Somebody on Twitter told him to have some empathy and he basically said to stick to the gossip magazines.”

Volunteer Jane O’Shea concurs. A communication teacher who had flirted with political action before, she was drawn to TOP after reading through their policy manifestos, describing her reaction as a massive sigh of relief. After creating election materials and facilitating conversation within the party, she says it would be impossible to describe how much time she dedicated to the cause, only to end up severely disappointed.

“The policies are fantastic, but what you say and the way you say it have to line up – right now it just doesn’t. There’s a real disconnect between the volunteers and the people running the party. Gareth Morgan just cannot put his ideas into practice.”

The Spinoff has been supplied the email which prompted Morgan’s curt direction to resign– what follows is an edited excerpt.

“Another day where it feels awkward and embarrassing to be associated with TOP. Gareth’s comments about the death of the Prime Minister’s cat were the top story on Stuff yesterday. They have also been covered by TVNZ, NZ Herald, National Business Review and others… I and many others experienced this uncomfortable feeling before – this feeling of having to support embarrassing behaviour we don’t agree with, either through actively defending it or through remaining silent – several times. This is just the latest in a string of incidents where Gareth’s comments have offended voters on both the left and the right of the political spectrum…

“It is not merely Gareth’s comments themselves – these are a reflection of the culture that exists within the party. There is a mismatch between our policies and our culture: between what we say we want to accomplish and how we actually behave. This mismatch makes us untrustworthy in the eyes of the public and makes me feel out of integrity…

“There is little sign that Gareth and the Board are interested in having this conversation… Gareth has done NZ a huge service starting TOP. Now we need to be having serious discussions as a party about how Gareth continues to represent TOP. It is my strong view that any future leader of TOP should gain that role from a mandate based on a democratic election by our members… I absolutely continue to support what TOP is trying to achieve, but I will not participate in a culture. I hope to be part of a constructive, ongoing, formal process to develop what I view as essential cultural and constitutional changes within TOP.”

Used to a hierarchical structure within TOP (the board of three decides alone when to expand, vets and ultimately selects potential candidates – “it didn’t look like a democracy to me”, characterises Watkins), Condie and Watkins expected a robust reply – but were bowled over at the one line dismissal.

“We were very well aware that a negative response was a possible outcome,” says Watkins. “That particular response, I’m shocked by that. That is just a disgraceful way for any leader of any organisation to speak to anyone.”

“It’s about treating people with respect and that is not happening here,” she continues. “It’s a total lack of respect. And it’s hugely frustrating and so disappointing. There was a point there where I really thought we’d break five percent. There were hundreds of volunteers busting their asses cause they really believed in what we were trying to achieve. I think Gareth doesn’t value it at all.”

Condie was perhaps less surprised, having been encouraged to resign from the party before. She says she was used to Morgan’s adversarial style of communication, although it was still quite the adrenaline rush receiving his reply.

“He was right in a sense though,’ says Condie. ‘I am a pain in the ass. But I’d always considered that to be a strength, especially in an organisation like TOP.”

Read more of The Spinoff’s coverage of Gareth Morgan and TOP:

Screaming into the Void: on the campaign trail with Gareth Morgan

Sean Plunket and me: a weird relationship

Doubling down on TOP; winding down the Morgan Foundation