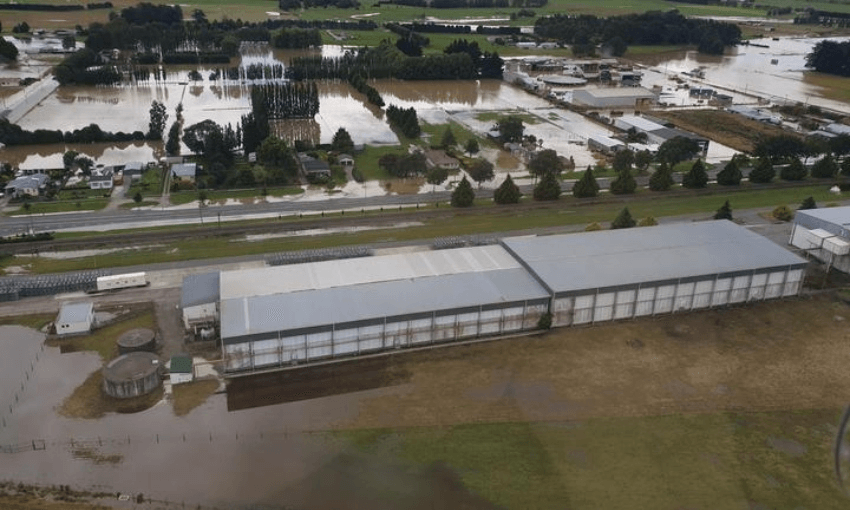 Flooding in Mataura as seen from the air (Radio NZ, Katie Todd)

Flooding in Mataura as seen from the air (Radio NZ, Katie Todd)

Minerals giant Rio Tinto has once again provoked the fury of the government over their operations down in Southland. So what’s going on, and why are people so angry?

This story is all about dross. Not the dross that gets put out by global corporations as PR when they find themselves on the wrong side of an issue – rather, literal dross. Those are the dregs that get produced in the process of smelting minerals.

In the case of this story, there’s an old paper mill in the Southland town of Mataura which is full of it. The dross got produced in the course of Rio Tinto’s aluminium smelting operation at Tiwai Point. This particular dross, when combined with water, can create dangerous clouds of ammonia gas, and there were huge fears of this happening when the town flooded last week. As it happened, the dross was secured, but many in the town wanted it gone for good.

It appeared that there was good news on this front, with the Gore District Council believing they hand a handshake deal with the smelter to remove the material, in collaboration with a million dollars from the government. But now the smelter’s owners Rio Tinto have apparently pulled out of that agreement, according to District Council chief executive Steve Parry. And a lot of people are very annoyed about that, including environment minister David Parker, who said on Morning Report that “it’s outrageous. I can’t reconcile it with their statements of corporate responsibility that they put on their own website”.

Is it Rio Tinto’s responsibility?

That depends on your interpretation. Rio Tinto paid another company (Taha International) to remove the material and store it in 2014, but in 2016 they went into liquidation, and the dross has simply sat around ever since. Community pressure has been constant for Rio Tinto to be good corporate citizens and remove it – for example in 2017 campaigner Cherie Chapman told NZ Geographic that “the smelter company has been too passive and left the Southland community with a major hazard.” In that story, the liquidators of Taha said they were trying to find a solution to dispose of the material that would be safe and meet regulations. Clearly, that hasn’t happened.

Who are Rio Tinto again?

The company was founded almost 150 years ago, and is now one of the largest mining companies in the world, with revenues of around $40 billion USD a year. Over that long and storied history, they’ve faced numerous allegations of human rights and environmental abuses. They’ve also been two-time winners of the Roger Award – an activist project aimed at highlighting the worst transnational companies operating in New Zealand.

So why are politicians involved in this now?

A major part of it rests on the “strategic review” currently underway of Tiwai Point operations. Basically, the smelter provides a lot of direct and indirect jobs around Invercargill and Bluff, and have periodically gone to the government for financial support, particularly around their extremely high electricity costs as the largest single power user in the country. The last government did provide $30 million in support, but on the understanding that it was the last time such funds would be forthcoming; an understanding that some commentators regarded with considerable scepticism. The alternative would have been the smelter closing, and those jobs being lost.

Of course, that wasn’t the case, and now Rio Tinto’s strategic review holds the threat of closure over the head of the government once again. There has been an unconfirmed suggestion that they don’t want to add to their legal liabilities while that review is underway, which also made Parker furious, accusing them of “crying wolf” to “wring out concessions.”

Incidentally, news broke yesterday that Rio Tinto were also reviewing an unprofitable smelter in Iceland. Here’s a fun quote from the Reuters story that sounds familiar: “Rio said it will complete a strategic review of the smelter in the first half of 2020 and continue talks with the Iceland government and power provider Landsvirkjun to explore options for a return to profitability.”

There may be legal action, with Parker speculating that the government might attempt to sue Rio Tinto. It’s a hardball tactic, but one which is in keeping with how escalating tension of the strategic review has gone so far.

As for Tiwai Point itself, a decision is expected to be announced on that in March. If it is to close, there’s a good chance it will be in large part because aluminium prices are low, and have been so for quite a while. You don’t become a multi-billion dollar company by running unprofitable operations.

And as for the dross? Who knows, but for the residents of Mataura, they’ll just have to pray that it doesn’t rain too hard again.