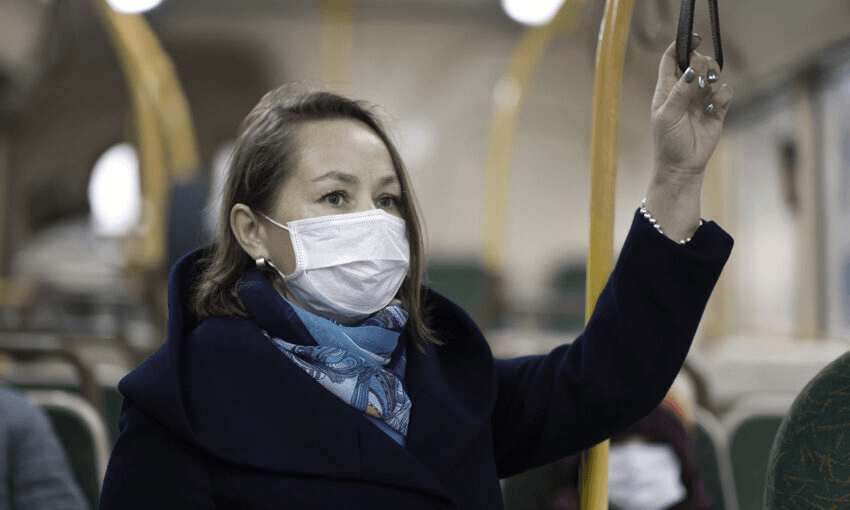 Mask wearing on public transport hasn’t been made compulsory, but come on (Getty Images)

Why has mandatory mask wearing taken so long?

Mask wearing on public transport hasn’t been made compulsory, but come on (Getty Images)

The masks are coming. New Zealand’s hard and early response to Covid-19 is finally adopting widespread mask use outside of lockdown. Justin Giovannetti writes about what changed in the halls of parliament to make it happen.

Masks will become mandatory on Auckland transit and domestic flights next week following months of criticism by leading epidemiologists that New Zealand has been avoiding a simple measure to lessen the risk of new outbreaks.

Chris Hipkins, the country’s Covid-19 minister, was shying away from a mask mandate as recently as Thursday afternoon. The government was relying on “goodwill” that people would follow suggestions and wear masks while also scanning QR codes diligently. Most people didn’t heed the suggestion.

Legally there’s been little stopping Hipkins from requiring that masks be worn and QR codes are scanned. The public health act approved by parliament earlier this year gives the government sweeping powers to restrict or require any behaviour in the battle with Covid-19.

Cabinet will also be looking at making scanning QR codes, or some other form of contact tracing, mandatory in the near future. Masks will come first.

The new Defence Force cluster, now numbering four cases – five if today’s new “weak positive” turns into a case-proper – has caused the minister to take action. The country’s newest case of Covid-19 community transmission is a cautionary tale. Dubbed Case D by the Ministry of Health, the woman contracted the virus somewhere in the heart of Auckland, probably late last week, from a defence worker posted to a managed isolation facility. Two other people were also infected by the worker.

The transmission to the woman may have happened in a bar, restaurant or chance meeting. The woman, who lives alone, has so far not passed on the virus to anyone in her apartment building, with the possible exception of the close-contact neighbour reported today, or to any employees or clients at the clothing boutique where she worked. She worked for days while symptomatic.

This virus has already been detected being passed between people in New Zealand’s managed-isolation facilities through momentary contact on rubbish can lids and elevator buttons.

Uncontrolled transmission in the centre of the country’s largest city is a hair-raising moment in the Covid-19 response. So far, the virus has spread no further yet.

Hipkins, speaking with reporters yesterday, said there were five recent cases of the virus breaking out of managed-isolation that were contained without a lockdown. Few have had as much interaction with the public as Case D. Should we be counting ourselves very lucky?.

“It’s a virus. There’s good luck and bad luck all the way through this,” said Hipkins. “There are no guarantees about anything. The best protections that you could possibly think of, it’s still possible for viruses to work their way through. That’s why constant vigilance is so important.”

As early as May, University of Otago epidemiologist Michael Baker began calling for the use of mass masking in public. In the months since, he has reiterated the call that masks are an essential part of the country’s arsenal to face down the coronavirus.

“We’re spending probably a million dollars a day on testing to detect an outbreak, we’re invested hugely in our contact tracing system and that’s all good but the one thing we haven’t invested in is getting masks available as an option,” he told RNZ in July.

He made the call again Friday morning. After months of hesitation and refusal, Hipkins announced a few hours later that the government has decided to follow his advice. However, there’s going to be another delay before masks are mandatory.

On Monday, Hipkins will bring a motion to cabinet. Technically, under the Covid-19 Health Response Act, he doesn’t need to brief the full cabinet. He does however need to brief the prime minister, minister of justice and any other minister who might need some input. It’s just easiest to do it when they are in one room. The meetings could be handled through a few quick Zoom calls.

The lack of urgency indicates health officials probably don’t fear uncontrolled transmission in Auckland, said Andrew Geddis, professor of law at the University of Otago. The act itself is designed to allow the minister to act quickly.

One thing Hipkins and cabinet will need to decide on is the punishments for not wearing a mask.

At the worse end of the spectrum, the act would allow for six months in jail or a fine of up to $4,000 for someone intentionally choosing not to wear a mask. That route would require a court to find someone guilty. They could also choose to make it an infringement, like driving without a WOF, punishable with a $300 fine on the spot.

“It’s actually very easy for them to do,” said Geddis. “Under the act, the minister can require people to comply with any specified measure that contributes to preventing the risk of outbreak or spread of Covid-19.”

Hipkins will face one challenge on Monday. He’s technically not allowed to do anything under the all-powerful Covid law. When the act was written in the winter, all power was invested in the minister of health. That’s now Andrew Little. Hipkins is the minister of Covid-19 response.

There’s a loophole built into New Zealand’s constitution act that allows one minister to exercise another minister’s powers. Hipkins’ office confirmed that they plan to use the provision to circumvent the law as it was written only a few months ago. “It shows how quickly this area is developing,” said Geddis.