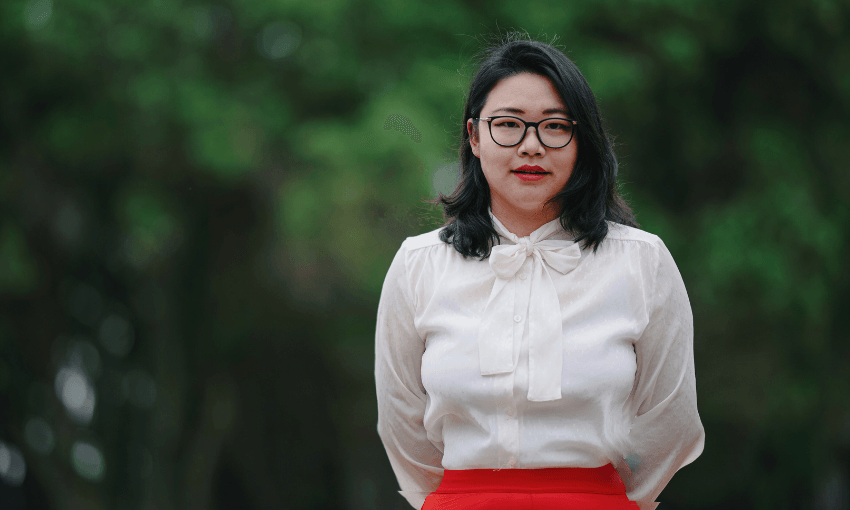 Chinese influence in New Zealand politics has been the subject of regular debate over the last term. What does it mean to represent the Chinese community in 2020? Sherry Zhang meets Labour’s rising star Naisi Chen.

Among the new faces on course to ride Jacinda Ardern’s wave of popularity into parliament tomorrow is Naisi Chen. A 26-year-old Chinese-New Zealander, she is standing for Labour in Botany. She’s not expected to beat National’s high-profile candidate, Christopher Luxon. But at 38th on the list, current polling means a seat is all but guaranteed.

The place of ethnically Chinese MPs in New Zealand politics has delivered plenty of headlines over the last term. National’s Jian Yang was the subject of reports about his historic role in the training of Chinese spies. Jami-Lee Ross released tapes of confidential conversations with former National leader Simon Bridges about Chinese MPs. With both Yang and Labour’s Raymond Huo retiring from politics, Chen represents, alongside Nancy Lu, who is 26th on National’s list, a new generation of Chinese New Zealanders in central politics.

A former University of Auckland law student, president of the New Zealand Chinese Students Association and vice-president of the Auckland Chinese Students and Scholars Association, Chen found herself name-checked by the high-profile academic Anne-Marie Brady, who approvingly quoted the characterisation of her as capable of forming a “New Zealand parliamentary CCP party cell”, along with Huo and Yang.

In her paper Magic Weapons, – which can be read here – Brady argues that the Communist Party is using the Chinese diaspora to push the agenda of the “united front”.

In recent days, members of a group called the New Zealand Values Alliance, an organisation unconnected to Brady, was handing out flyers in Auckland’s Aotea Square claiming that Chen is a “CCP agent”.

Naisi Chen certainly isn’t trying to hide from the issue. When I meet her Pilkington’s in downtown Auckland for afternoon tea, she greets me with a hug, and an assurance: “My background is not communist.”

Chen’s dad is a Christian pastor and her mum is a Chinese doctor. Her interest in politics began at university. A series of brutal attacks on Asian students in 2016 meant “the international student community was feeling really unsettled at the prospect of coming into NZ and the government wasn’t doing anything about it”, she says.

As president of the New Zealand Chinese students association, Chen got her first taste of policy working with Jacinda Ardern, Nikki Kaye, the police and the Human Rights Commission. They rewrote the international student wellbeing strategy and changed the lightbulbs in Albert Park.

“The first time I saw those lightbulbs change, I cried. So much work went into it, and we finally saw a physical manifestation of our voices. I realised I could do something for all the students and for everyone in NZ.”

She was persuaded to run for Labour in 2017, after being approached by Raymond Huo. It wasn’t something she’d anticipated. “I said I wanted to be a criminal lawyer. I even had my CV in my bag, I thought he was going to offer me a job at his law firm.”

Chen scoffs at the suggestion she is some kind of Beijing operative. Brady’s claims, she says, are not backed with evidence. “Everyone she’s targeted are NZ citizens who have a right to vote. They have a right to voice their political perspective and opinion regardless of the side of spectrum they are on.”

The ambition to represent a Chinese New Zealand perspective is far from simple, she says. The community includes a diversity of views and values, from migrants who remain attached to the values they’ve grown up with to those who fled from the CCP and all it stands for – and everyone in between.

“There’s diversity within diversity,” she says. “In the Chinese community you have the third or fourth generation whose ancestors were gold miners who came to NZ … and even though mainland Chinese people statistically make up the bulk of it, you’ve also got Singaporean, Malaysian, Hong Kong and Taiwanese people.”

This is a point that Brady herself makes, however, in Magic Weapons, where she emphasises the “very diverse group” represented by Chinese New Zealanders.

As a 1.5 generation migrant, she’s confident in her ability to communicate across the different groups. “I grew up in a very multicultural environment. As much as I’m a Chinese politician, I’m not just here to serve that community.”

Yet serving everyone is difficult, especially when it comes to difficult international issues such as the mass internment of Uighur muslims by the CCP. Chen says her allegiance lies with New Zealand. “I think NZ has a very mature foreign relationship with other countries and foreign affairs department. It’s their job to determine where New Zealand stands.”

While that stance may fall short of what human rights advocates would like to see, it’s telling that no other politician in this election is likely to feel they need to assert their allegiance to New Zealand.

Chen doesn’t dismiss out of hand Brady’s concerns about Beijing’s efforts to use the diaspora for its own – but it’s not happening to the extent suggested, she says. “It’s somewhere in the middle.”

“There is no point going full pro-China, or full anti-China,” she says. “We have to look at it more objectively for the benefit of NZ.” Chen cites Jacinda Ardern as saying, “China is friend and despite our different perspectives on some issues, our relationship I believe is a mature and resilient one.”

Chen adds: “Friends change each other’s opinions more than enemies. If you put yourself at an ultimate standstill with another party, you are not going to move anywhere. The same goes for nations – soft influence changes things.”

The Labour Party has had its own ups and downs, including the racist insinuation that the Chinese are buying up all New Zealand’s houses. Chen says Ardern has already adequately apologised on Chinese media, and that Chinese voters are “warming up to us. But we still have a long way to go.”

Polls suggest Chinese voters tend to vote National, and are predominantly concerned with economic issues. Yet according to Chen this is changing as the community “readjusts their mentality so that GDP isn’t just a figure, but lives and livelihoods”.

Social issues such as homophobia are still prevalent within the Chinese community and Chen says she’s often had uncomfortable conversations with her parents. But, she says, “they’ve chosen to live in this land. Their children grow up here, and they might disagree with some of Labour’s social policies but we need to keep talking about it.”

My own parents grew up in a time of censorship, with a very real fear of government powers. They left China due to discomfort with taking bribes and joining the CCP being their only path to a better life there. That is probably why they always seemed nervous when I attended protests. They worried that should I be judged by the CCP to be a dissident, the family back in China would receive a “gentle reminder”.

Chen had a similar upbringing. “They ran away from the Chinese political system for a reason.” While her parents know that they can vote here, “they still have the Chinese way of thinking, that MPs can do anything and everything. In a democracy we need to work with the community, with iwi and tangata whenua, and we often work cross-party for solutions.”

As a new generation of Chinese New Zealanders emerge, Chen reckons she’s ideally placed to represent it in parliament. “I came here when I was five,” she says. “So no brainwashing … If there’s someone to make it in politics, it’s me.”

An earlier version of this article incorrectly attributed the phrase “army of diaspora” to Anne-Marie Brady’s paper Magic Weapons. Apologies for the error. The article has also been updated to clarify that there is no link between Brady and the NZ Values Alliance.