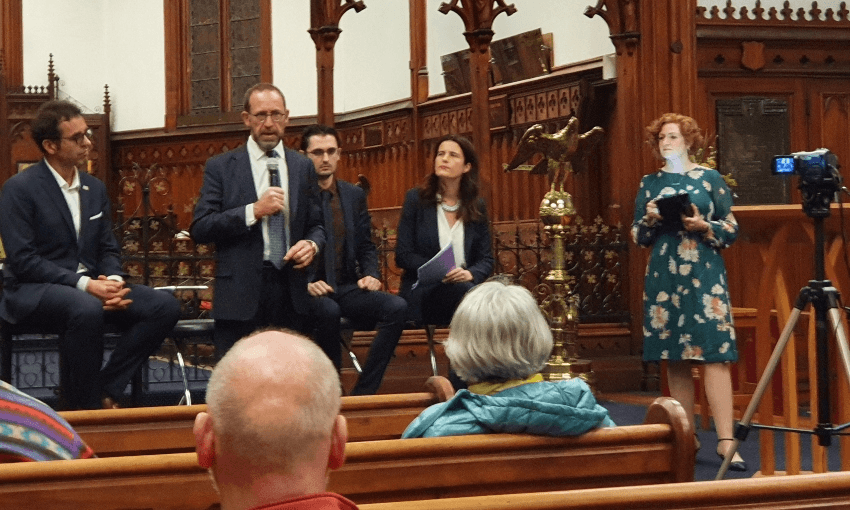 The subdued frustration of a debate on inequality

Campaign groups are trying to get issues around the welfare system, housing and poverty onto the election agenda. Alex Braae was in Wellington to see a deeply frustrating debate play out.

Many election forums give politicians plenty of room to speak about whatever they want. But at a forum on inequality, the onus was reversed, with candidates asked to account directly and specifically for how their party would help those with the least.

The Enough for All forum was held at Wellington’s St Peter’s Church, hosted by a range of poverty action groups and attended by representatives of five parties. With the nature of the discussion being heavy, the mood of the room was subdued compared to the rowdiness of many events that aim to make the election fun.

People who had lived experiences of coming up against the more difficult and punitive aspects of the welfare system first outlined their stories, before follow up questions were directed at particular politicians. The stories were personal, deeply involved and bleak, illustrating the way many experience government policy as something that’s done to them, rather than for them.

Over the course of the evening, it seemed to become a particularly frustrating room for NZ First’s Rongotai candidate Taylor Arneal and National’s education spokesperson Nicola Willis, who faced more follow-up challenges than other candidates on stage.

The event also illustrated the gap between Labour and the Greens. Labour’s Andrew Little was repeatedly questioned on his statements by the Green Party’s Ricardo Menendez March, particularly on issues of raising core benefit rates, and relationship rules for beneficiaries. His needling was never really responded to by Little, who also took the opportunity to direct some barbs to his right at NZ First’s representative.

The first question came after a demonstration of wealth owned through the slicing of a pavlova. A tiny slice was shaved off to represent the 2.5 million New Zealanders with the least. When a massive slab was given to the top 10%, candidates were asked if they supported the wealthiest paying more, with a wealth tax being an example of how that might happen.

Answers all had to start with a simple yes or no. Willis came out with a no, before speaking about how people had to pay their fair share and that a growing economy would lift all. Taylor was also a no, saying that IRD needed to be properly resourced to make that happen.

Menendez March, joining the meeting through Zoom, was the first yes on that question. He talked about both a wealth tax at the top 6% and how a tax-free threshold of $10,000 was necessary to rebalance the tax system.

Little talked about the party’s policy of a new top tax rate and called that a yes, but didn’t go near a wealth tax in his answer. Opportunities Party leader Geoff Simmons said the devil was in the detail and said rather than a blanket wealth tax, there needed to be a tax on property.

Despite the best efforts of the organisers to pin politicians down with yes or no answers, the slipperiness still showed through. An example of this came in a follow-up question from Stacey Ryan, who has spent years living with chronic pain, making her unable to work. She asked candidates if their party’s policies would force her into work, even if she was too sick to manage.

Each candidate began their answer in much the same way – no, nobody should be forced into work if they have an illness or disability that makes it impossible. However, as Ryan’s question made clear, the hoops that she has to jump through to remain on the sickness benefit (like being required to provide regular medical certificates at her own expense) makes that something of a moot point.

After each question, moderator Susie Ferguson asked the questioner whether they felt they had got an answer. “I got answers, but they weren’t necessarily the ones I was hoping for,” quipped questioner Zoe, who asked about extortionate prices for substandard rental housing.

And that rather summed up the state of the evening. Poverty remains endemic for thousands of New Zealanders, with the downturn from Covid-19 ensuring that many others will soon join them. Progress on alleviating poverty over the last three years has largely been piecemeal, focused on addressing specific facets of the existing welfare system rather any sort of systemic change. With house prices tipped to continue rising amid everything else falling apart, those with wealth will continue to get wealthier.

While the questions that were asked gave Menendez March room to discuss the party’s significantly more ambitious policies, he was hamstrung by the political realities of the Greens having weak polling and having little leverage over Labour. At one point during his pitch, he even noted that Labour had recently ruled out raising core benefit rates. It came in the context of asking for votes, but illustrated just how difficult even a stronger Green Party would find sweeping welfare reform as part of a Labour government.

Picking up on that, Ferguson took a moment to ask Little why so few of the Welfare Expert Advisory Group recommendations had been brought in, particularly on the raising of core benefits by 47%. “We could not do that in one fell swoop because it’s expensive and there are competing priorities,” he said. Nicola Willis agreed, saying “we simply can’t afford that as a country” and argued that incomes from benefits shouldn’t be too close to incomes from jobs in order to incentivise work.

Audience polling conducted over Zoom by Action Station showed that an overwhelming majority of watchers backed what the Greens were saying, with TOP coming in second place, and Labour in third. Not a single person watching online voted for National. Regardless, Willis thanked those who had questioned her for sharing their stories.

“Maybe take some of these stories and kōrero back to your teams,” said Ferguson in closing. But these stories weren’t really new. They were unique examples of what thousands of people have experienced for decades. With candidates sticking closely to their party lines, the biggest frustration of all was clear – that not enough would be done to prevent these same stories needing to be told all over again in three years.

Alex Braae’s travel to Wellington was made possible thanks to the support of Jucy, who have given him a Cabana van to use for the election campaign, and Z Energy, who gifted him a full tank of gas via Sharetank.