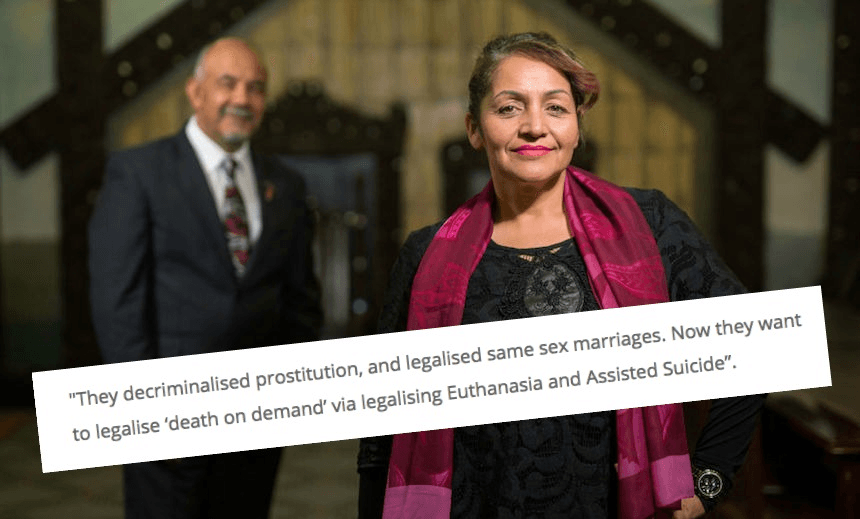 I thought you had my back, Marama?

It’s never easy being takatāpui. Within the queer community, we can be subjected to exclusion and discrimination based on our culture and heritage. In the Māori community (and indeed in society as a whole) we can often be shunned because of our queer identities. Sometimes it is hard to know where to turn, but I am very proud to be takatāpui. Both my Māori and queer identities are important parts of me that make me who I am.

That’s why I was so disappointed to see this press release from the Māori Party on Friday. While the emphasis is on euthanasia – and I have my own views on that – I was particularly heartbroken that the Māori Party would endorse a statement like this:

“They [the Labour Party] decriminalised prostitution, and legalised same sex marriages. Now they want to legalise ‘death on demand’ via legalising Euthanasia and Assisted Suicide.”

I’m heartbroken because, of course, as takatāpui, I have the right to formalise a relationship with a person I love, regardless of gender. We’ve debated this. I get it, some people disagree.

But I’m really heartbroken because I thought the Māori Party had my back. I have greatly admired Marama Fox, the Māori Party LGBTI rep, who just this year led the charge to pardon convictions of adult homosexuality prosecuted prior to homosexual law reform in 1986.

I have the honour and pleasure of working for ActionStation, an independent non-profit mostly crowdfunded campaigning community that works to create a more fair and flourishing New Zealand. We like to say it’s people-powered: the people of ActionStation direct our goals.

This year, we’ve been doing research and speaking to experts like the crew at InsideOUT about what needs to be done to enshrine the rights of queer whānau in Aotearoa, and as a result of that mahi, we’ve come up with a scorecard for each party on their history, policy, vision and values on improving the lives of queer New Zealanders. In fact, we’ve created scorecards across a number of areas, but that’s another story for another day.

Here’s how the parties stack up on the rights, freedoms and support of queer people in Aotearoa New Zealand:

If you’re a caring queer (a cueer?), this scorecard makes clear who our pōti should go to this year.

At ActionStation, we are even advocating that people use their vote strategically to bring in a Labour-Greens-Māori coalition as the most progressive possible option right now, based on trends in polling and pretty rigorous policy analysis.

But given this latest press release from the Māori Party, and the lack of confidence it instills in this particular takatāpui voter, I may just have to reconsider where my party vote goes.

Marama Fox has responded on Twitter: “[The media release] is not party policy. These are Pasifika whanau making a statement on their personal perspectives regarding conscious issues.”