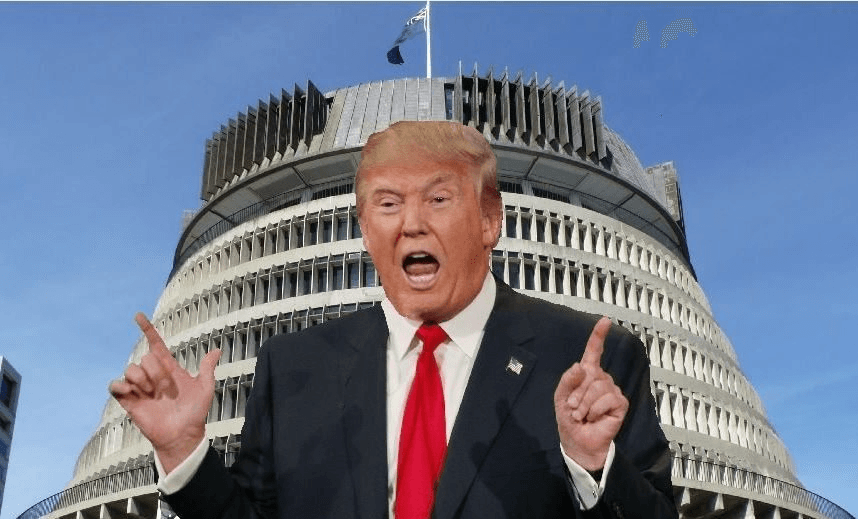 A Donald Trump in New Zealand could wreak great havoc. We should act to prevent that now

The turmoil being witnessed in America at least illustrates the necessity of constitutional checks. It should spur New Zealand to adopt its own written, codified constitution, writes former prime minister Geoffrey Palmer

The constitutional turmoil in the United States highlights the value of a written constitution in stopping governments from over-reaching their powers.

There have been two serious occurrences in the first weeks of the new administration.

First was the travel ban on seven Muslim-majority countries. Then the forced dismissal of the newly appointed National Security Advisor, Michael Flynn, over dealings with Russia.

Neither of these events has been fully played out yet but already there are lessons to be learned.

The travel ban was intended to block nationals from Iran, Iraq, Syria, Yemen, Somalia, Libya and Sudan from entering the US, including permanent residents and those on valid visas, and to bar all refugees for 120 days and Syrian refugees indefinitely.

US courts at both federal and state level have issued orders temporarily blocking the administration from implementing the ban, pending full hearings to determine whether it is lawful.

Courts have acknowledged that the president has significant powers over immigration and border control, but those powers must be used in ways that comply with the law.

Opponents argued that the ban violated the due process rights of people from the seven countries, and in particular the rights of those who were US residents or green card holders. More generally, they argued that the ban unfairly targeted the Muslim faith, in violation of the First Amendment which prevents the government from favouring one religion over another.

The Trump administration has not said whether it will go to the Supreme Court to challenge the restraining orders. Instead, it is considering a new order aimed at bypassing the earlier court rulings.

The court rulings highlight the sloppiness of the Trump administration’s attempts to impose the ban.

The lack of legal groundwork done by the White House aides who wrote Trump’s executive order was stunning. The order was poorly drafted, lacked clarity, and bore all the hallmarks of having been put together rapidly. Various explanations and retreats had to be made almost immediately.

Those charged with the responsibility of enforcing it were not properly briefed or instructed on how to administer the measure. Many relevant and high level parts of the United States government were not consulted about the order, including its practicality or legality.

No diplomatic groundwork was carried out with other governments, either, to prepare them for what was to come. The consequences for the human rights of those affected appeared to receive no consideration.

That it has been held up in the courts was completely predictable.

The administration’s dreadful handling of this matter is a cause for considerable concern, and not only for US residents. It leaves the impression that the Trump administration has no idea of how to develop and implement policy. In other words, it has no idea how to run a government.

What is heartening about this fracas is that it shows the constitutional separation of powers working as it should. The courts have not attempted to develop policy. They have applied the law, which protects US residents’ rights and freedoms even in the face of attack from the executive.

The separation of powers is set out in the US constitution, and exists precisely to guard against unreasonable use of executive power. In this case, it is working. What’s more, it is working despite the president’s vitriolic criticism of the judges involved and his apparent contempt for the rule of law.

It is worth pondering how things might have played out if the US constitution did not provide such clear checks on executive power.

Could similar difficulties arise here? I think it unlikely that any New Zealand government would want to implement such a policy but, if it did, there are various procedures in place that would guard against the sloppy drafting and implementation that characterised Trump’s executive order:

Many protections against bad government are to be found in proper procedures and well organised decision-making systems. New Zealand does have some checks and balances already in place.

This does not mean that I favour a Constitution like that in the United States. I do not. These events demonstrate the superiority of the Westminster system in which Cabinet members are part of the legislature, as in New Zealand.

The United States system of changing most of the senior public servants when the president changes is a mistake. It opens the door to the point that new appointees do not know how government works.

In New Zealand we do not replace the senior public servants when the government changes.  This is a great boon and demonstrates one aspect in which the Westminster system is superior to the American system.

So the Flynn saga could not have happened here.

What events in the US do show is the principle that the separation of powers matters, and so does clear and unambiguous protection for the rule of law and the role of the courts. That is why, although I do not favour US political structures, I do think that New Zealand needs a written, codified constitution to protect rights and liberties and prevent governments from abusing power.

And it would be better to have one sooner, so the protections are clearly set out before any constitutional confrontation unfolds.

Sir Geoffrey Palmer QC is a former New Zealand prime minister, a lawyer and a writer. He is the co-author with Dr Andrew Butler of A Constitution for Aotearoa New Zealand, which makes the case for a written and codified constitution to protect New Zealanders’ rights and liberties. They are taking submissions on their proposals at www.constitutionaotearoa.org.nz.