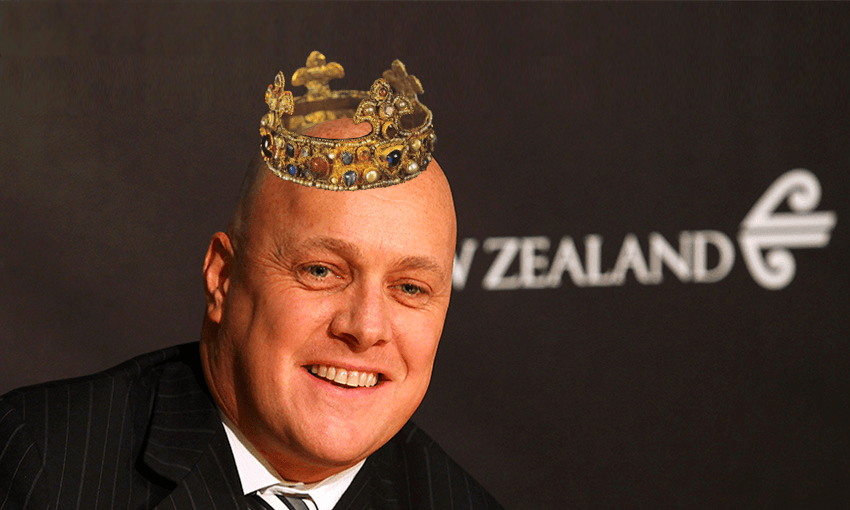 Revealed: Christopher Luxon is not definitely the next National PM

The CEO of Air New Zealand Christopher Luxon has resigned, leading to feverish speculation that not only will he get into politics, but that he’ll be the next National PM. Why?

Watching the takes unfold around the apparently imminent and glorious political career of Christopher Luxon, it’s hard not to feel a little powerless about it all.

An entire roadmap has already been laid out, going something like this. He runs at the 2020 election for the Botany seat, winning it comfortably from Jami-Lee Ross despite the party losing. He immediately impresses people enough to move quickly to the front bench. Then a few months out from the 2023 or 2026 election, there’s a crisis of polling, whoever the leader is gets rolled, and he gets elevated to the leadership in time to put National back in parliament.

Like the tides coming in and going, these events are seemingly out of anyone’s control. It appears they will simply happen. Perhaps in this scenario, even Christopher Luxon himself is merely a prisoner of fate, destined to live out his later years occupying the highest office in the land, before he himself inevitably hands over the reins to Max Key or something.

Is it possible – and hear me out here – that perhaps, just maybe, some of this country’s commentariat have got a tiny bit ahead of themselves here? Yes, his resignation statement hinted towards a career in politics, and those much more inside the tent than myself indicate that he holds high political ambitions. But as yet, no announcements whatsoever have been made about him standing, or being selected for a seat, or a place on the list, or anything remotely concrete at all actually. The only thing we do know for sure is that in a few months he’ll no longer be the CEO of Air New Zealand.

The narrative ignores the absolutely enormous number of obstacles in his way, which are worth going through. The first of which being – what if he doesn’t win an electorate selection? It stands to reason that if there’s a good National safe seat like Botany going, then every aspiring centre-right politician will be gunning for it. That could be former mayoral candidate Victoria Crone. It could mean former National candidate, Auckland businessman and flag referendum guy Lewis Holden has a crack. The National Party likes to stress that they don’t parachute candidates into seats, so has Luxon made any inroads with a local party branch? Who knows, who cares? It’s apparently happening.

Then, once that hurdle has been cleared, what about the rest of the National caucus? Are we really expected to believe a bunch of people who have been patiently waiting for their chance will just stand aside and allow a newcomer through? Five of them stood for the leadership when Bill English relinquished it, what do they all do now? What about MPs who were formerly known as the next National PM, like Nicola Willis? Forget all of them, under this reading of the future they’re all irrelevant drones who will fall into line when the moment comes.

There’s any number of plausible scenarios that could derail it. The National Party, historically a coalition between different internal factions, might split in some way. The Labour Party might stay popular for longer than electoral cycles traditionally allow for. Hell, Simon Bridges might even hang on and win in 2020, which would make it a bit difficult to imagine a newcomer then quickly taking the leadership.

Then there’s the question of electability to consider. Luxon ran a very big business – good for him. Other MPs currently in parliament have been doctors, Crown prosecutors, TV personalities, religious ministers, social activists and so on. The current PM and finance minister both came up through the ranks as parliamentary staffers, and so far they’re looking fairly electable, according to the polls. Nobody, to the best of my knowledge, has any idea what the voting population at large thinks about Luxon. Are they too bound to the whims of destiny?

The idea that a business leader is a more attractive prospect to voters than any of the rest of that seems a bit thin. Comparisons get made to John Key, because after all, both he and Luxon are rich guys. But it ignores that Key’s tenure as PM began when his sunny optimism was contrasted with an increasingly dour and tired Labour government. And after all, it’s only at the very start that MPs have outside jobs – by the time they’ve run for election, they’re all just politicians.

There’s always a race with these things. Have the first take, be the most savvy, call it before it happens, make a prediction that will look like genius if it comes off. But it’s just noise. Let’s all just have an in-flight lolly and calm down.