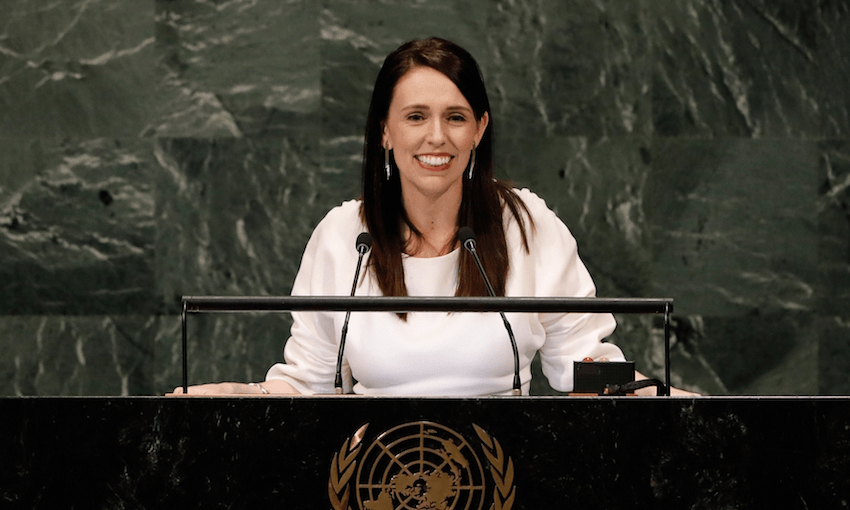 Prime Minister Jacinda Ardern at the General Assembly of the United Nations where she spoke of the need for global political action on climate change (Image: EPA/PETER FOLEY)

The Jacinda Ardern coalition, one year on

Prime Minister Jacinda Ardern at the General Assembly of the United Nations where she spoke of the need for global political action on climate change (Image: EPA/PETER FOLEY)

This article was first published on The Conversation.

A year on, Ardern is New Zealand’s prime minister, the third woman and the youngest person to have held the role in 150 years. She is comfortably the most popular politician in the land, and one of the brightest stars in the international political firmament.

It has been quite the year for Ardern. It is worth reiterating just how far she has travelled since she took the reins as Labour’s leader just weeks before the election, igniting a dull campaign and resuscitating Labour’s polling.

A year ago today @winstonpeters made a bold call that changed EVERYTHING. We watched on TV like everyone else, except I pointed a camera the other way. Here’s a before and after thats never been seen.

What an incredible year it has been, what a year ahead.
Welcome to the ride. pic.twitter.com/ytjwajSzmn

Following the election, the conservative National Party looked odds-on to retain office. But on 19 October, after almost two weeks of negotiations, the leader of the centre-right New Zealand First (NZF) party, Winston Peters, surprised virtually everyone (including Labour’s front bench) when he used the balance of power to form a government with Labour and the Greens.

In the year since, Ardern has firmly established herself as the government’s and her party’s most valuable political asset. In an ironic turn of events, Andrew Little, the man who voluntarily stood aside so Ardern could become Labour leader, is also performing well.

An astute and effective political communicator, Ardern regularly uses Facebook Live to apprise the nation of the contents of a day in the life of the PM.

The formal set pieces that have helped established Ardern as the dominant figure on New Zealand’s political landscape include her speaking on the lower marae at Waitangi, the spiritual birthplace of the nation, wearing a Māori korowai while meeting New Zealand’s head of state, and taking a seat in the United Nations General Assembly with her child, Neve Te Aroha, and partner, Clarke Gayford.

The informal, popular-culture moments – particularly those mediated by social media – have been just as important and reflect how Ardern occupies political time and space in a way no previous New Zealand prime minister has. She and Gayford have used Twitter to announce Ardern’s pregnancy, triggering stiff nationwide competition for the role of official babysitter. Social media also charted the birth of their child in a public hospital, the PM’s taste for mac’n’cheese, and the creation of a special UN pass for Neve Te Aroha.

But swooning international audiences do not vote in Aotearoa New Zealand, and what plays well on the Colbert Show does not necessarily resonate in quite the same way back home.

Not all smooth sailing

It is important to note that National continues to outpoll Labour on the preferred party vote. At times the political management of the coalition has been shoddy. Ardern has already had to relieve two members of her cabinet – Clare Curran and Meka Whaitiri – of their ministerial duties, to the disappointment of those hoping to see more, not fewer, women at the top table.

Ardern has also been criticised for not taking a stronger stand on the plight of refugees and on questions concerning possible Chinese involvement in domestic politics. While the government has established many reviews, it is taking some time for the material achievements to start racking up.

But there are signs the administration is starting to hit its straps. Finance Minister Grant Robertson recently announced a larger than expected budget surplus, thus meeting his promised public debt/GDP ratio four years ahead of schedule.

Since Ardern’s return from the UN, Peters and his New Zealand First party colleagues have looked uncharacteristically focused, although the call at the party’s recent conference for a Respecting New Zealand Values Bill was quickly slapped down by Ardern.

Meanwhile, the opposition National party is spiralling into nasty internecine strife that has gone global, may cost the party its leader, and will almost certainly damage its polling.

Changing the culture of politics

Standing back from the detail, what can be said about the political landscape in Aotearoa New Zealand one year on from the formation of the first Labour-NZF-Greens coalition? For one thing, on this side of the ditch we are cautiously re-familiarising ourselves with the idea that the state can be a force for good. The results at this early stage are patchy, as you would expect, but this administration’s belief that government can be benign rather than benighted feels new and different.

Second, Ardern is normalising a whole bunch of things. Being a prime minister and a new mum, breastfeeding at work, and having a male partner who is a primary carer are all becoming, well, just normal.

Third, our cultural politics are changing. Not quickly enough, to be sure, but the symbolism of the fact that Ardern and Gayford’s child carries a Māori name and will be raised speaking both te reo Māori and English has been lost on precisely no-one in this country.

Finally, the nation’s political stocks in the international arena are appreciating. That is no bad thing for a small, exporting nation. There is a powerful progressive-egalitarian narrative in New Zealand reaching back through the nation’s anti-nuclear stance in the mid-1980s to the achievement (or granting) of women’s suffrage in 1893.

As is the case with all political narratives, this one obscures as much as it reveals. But in an age of international fear and loathing, many New Zealanders take quiet pride in the sight of the “pretty communist” defending a rules-based international order, in opposition to the stance taken by the president of the US, a nation that was once the self-appointed leader of the free world. One wonders whether the farmer from Morrinsville appreciated the irony of that moment.

Richard Shaw is a Professor of Politics at Massey University. This article is republished from The Conversation under a Creative Commons license. Read the original article.