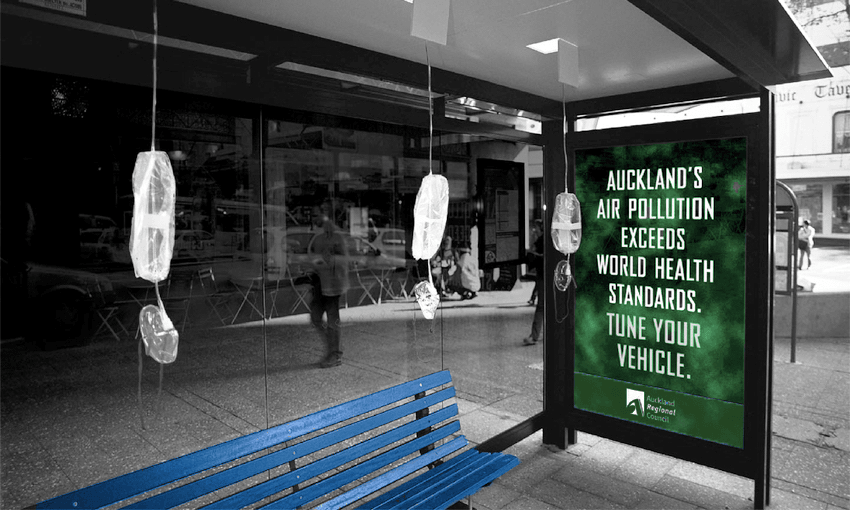 Remembering 0800 SMOKEY, the campaign which turned Auckland into the City of Narcs

Twenty years ago, Auckland’s streets were ruled by diesel-hating narcs. Josie Adams looks back at the short-lived 0800 SMOKEY campaign.

For five chaotic weeks in 2000, the Auckland Regional Council experimented with extreme, multi-level peer pressure. The goal: to get cleaner-burning fuel into Auckland cars. The method: turning citizens against each other in a whistle-blowing free-for-all.

It was a new millennium, with new concerns. The hole in the ozone layer was killing our tanning oil industry, vegetarians were mainstream, and the Kyoto Protocol was still a fresh topic. We wanted to start the next thousand years with the longevity of humanity in mind, and in Auckland one obstacle was greater than the rest: air pollution.

Even pre-supercity, Auckland was a vehicular hellscape. The council estimated that 80% of air pollution was down to transport emissions, much of which was sulphur from sub-par diesel. The council wanted oil and gas companies to provide cleaner fuel, but to get there it needed citizens to want it, too. Thus began 0800 SMOKEY, a public awareness campaign that relied on every driver having a messiah complex.

From August 14th 2000, Aucklanders could take environmental justice into their own hands and report the smoky cars blighting our pristine motorways. Walls were emblazoned with capital letters: AUCKLAND’S AIR POLLUTION EXCEEDS WORLD HEALTH STANDARDS. Oxygen masks hung from bus shelters. Giant mirrors were set up for people to check their exhaust pipes as they stood still in traffic.

The mirrors also helped us check everyone else’s exhaust pipes. If we saw a car coughing soot for longer than 10 seconds, we knew what to do: call 0800 SMOKEY and dob them in. Aucklanders don’t naturally gravitate toward a neighbourhood watch model, so the council was taking a gamble by asking them to squeal on dirty cars. Kevin Mahon, a council spokesman at the time, said “the Kiwi attitude is fairly anti dob-in”.

Everything we knew about Auckland society was wrong. In just two weeks the campaign received more than 11,000 phone calls. The campaign peaked at 1,500 calls in one day, and one vehicle was reported 75 times over a 24-hour period, allowing the council to track it across the city.

Council councillor Patricia Thorp noted the huge amount of tattletales in her city, commenting that the council had “obviously struck a chord with the public”.

The chord it struck was deep and lingering. Obsessed with vindictively dialling in drivers the moment their exhaust dribbled even the tiniest smudge, 0800 SMOKEY continued to receive phone calls long after the campaign was over, leading many to believe it lasted for months, not weeks.

Christine Fletcher, mayor of Auckland City at the time, has nothing but fond memories of the campaign. Of the gusto with which her subjects took up narking on each other, she said: “My grandmother used to have a great saying, ‘if it’s going to be, it’s up to me’. I think people want to feel empowered, they want to feel that they can do something, and not just feel frustrated.”

Hotline callers did, in fact, dial SMOKEY in frustration. “Someone cut me off, and I felt vindictive,” said Brody Nelson, who was 20 at the time. “So I dobbed them in.” However road ragers like Brody were wrong to assume some kind of vengeance would be wreaked.

For every smoky exhaust reported to the powers that be, a letter was sent. It didn’t contain warnings, fines, vengeance or satisfaction of any kind. It contained a free emissions check offer. It remains unknown how many people took the council up on it.

Auckland remains a city of cars, not sails or e-bikes, but Fletcher was quick to point out her council’s public awareness campaign achieved its goal: decreased vehicle emissions. The genius of 0800 SMOKEY was its knock-on peer pressure.

The council wanted us frothed into a rage against the dirty machines, so pressure mounted on key stakeholders – i.e. the oil and gas industry and central government – to do something about air pollution that regularly exceeded World Health Organisation guidelines.

In less than a year, three major fuel companies had agreed to provide lower sulphur diesel to Aucklanders, and it was in hot demand. The Ministry of Transport granted police the ability to fine vehicles with smoky exhausts $150 for crimes against the environment.

It also led to the creation of the Big Clean Up, a social marketing environmental project focused around the tagline and sad truth, “more Aucklanders die from breathing than driving”.

Things have changed over 20 years. Auckland’s vehicle emissions make up only 35% of its total emissions, and not a single one of us takes letters from the council seriously. But we will, until the Earth’s dying days, love to nark.