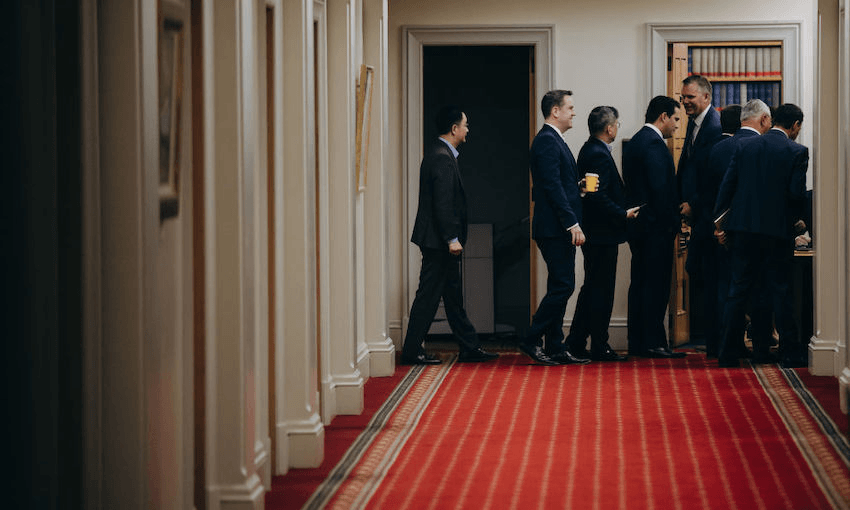 National MPs file into the caucus meeting to vote on the leadership of the party on May 22. Then, Todd Muller emerged victorious. (Photo: Dom Thomas – Pool/Getty Images)

National voters were ready to fall in love. But they couldn’t love Simon Bridges

National MPs file into the caucus meeting to vote on the leadership of the party on May 22. Then, Todd Muller emerged victorious. (Photo: Dom Thomas – Pool/Getty Images)
Opinion

Charismatic leadership has historically been less important to New Zealand voters on the right. But when the country was thrown into crisis the old rules suddenly no longer applied, writes Danyl Mclauchlan.

And just like that the National Party has a new leader. Todd Muller has replaced Simon Bridges because of catastrophically bad poll results. It’s true that most governments around the world are enjoying a poll bump during this crisis, but not all opposition parties have to face the voters in less than four months, and few of them had a leader quite as graceless during a moment of national solidarity as Simon Bridges was.

But what does leadership count for in New Zealand politics? For the current government it is everything: the Labour Party with Andrew Little as leader and Jacinda Ardern as his deputy was unelectable. More than quarter of a million New Zealanders switched their support to the exact same party when Little stood down, making way for Ardern, and those votes gave her the numbers to govern the country.

But at the start of the year, Ardern looked like she’d be a one-term prime minister and Bridges looked likely to form a new government in September, with the minimal support of ACT, even though Bridges wasn’t popular at all. In 2018 he suffered a devastating blow when his senior whip and confidant Jami-Lee Ross turned on him, in one of the most bizarre and toxic political episodes the country had ever seen, implicating Bridges in a donations scandal (which Ross is now facing Serious Fraud Office charges for). In the wake of that catastrophe, Bridges’ leadership rivals within his own party outperformed him in the preferred prime minister rankings. But he could still have been prime minister if the pandemic never came along. Ardern’s qualities as a leader seemed to be everything to Labour voters, and Bridges’ qualities as a leader seemed irrelevant to National voters, until suddenly they weren’t.

Ardern is part of a recent global trend of left-wing political leaders who are mediagenic, highly articulate, and openly worshipped by mainstream media outlets and other progressive elites. They eclipse their own party with their personal brands; they campaign using soaring rhetoric about hope and transformational change. But they govern in a small-c conservative style. They offer voters the illusion of change and the comfort of the status quo. Obama is the archetype here, and Ardern and Canada’s Justin Trudeau are the most successful imitations. The left fall in love and the right fall in line, as the saying goes.

“The purpose of the National Party is to govern the country,” a National MP explained to me recently, “and that’s hard to do well, as those muppets-” he jerked his head at the Beehive, “are finding out”. During her first term Ardern has spent a lot of her time and communications expertise delicately explaining why she wasn’t going to stand down another incompetent minister, or why her government had abandoned yet another campaign promise, or why some new jaw-dropping ethical scandal in her cabinet was none of her business. At the beginning of this year her government decided they were “the infrastructure government” and announced a clutch of projects that were primarily, National pointed out, former National projects that Labour had suspended for two years then relaunched for the election.

So leadership is less vital in right-wing politics. Which helps explain why, back in mid-February, the National Party were five points ahead in the polls even though Ardern was 31 points ahead of Bridges in the preferred prime minister rankings. Nearly half of all voters trusted National as an institution. They seemed to feel it would govern the country well despite having a not particularly likeable leader.

But in the last six weeks hundreds of thousands of those soft National voters have gone over to Labour, judging that good leadership is the most important quality in the current moment of crisis. And good leadership was the one thing National didn’t have. It says something very healthy about the state of our democracy, I think, that about a third of the population are persuadable to switch allegiance to another party, if one of them seems evidently well run or the leaders of the other clearly unfit for office. In contrast, more than 40% of Americans still intend to vote for Donald Trump in November. It might be enough to win him a second term. Why not tell people to inject themselves with bleach if the voters won’t hold you accountable for it?

I like to think New Zealand voters will continue to support Ardern for as long as she continues to do her job well (and some of this success seems to involve keeping most of her cabinet in a sub-basement of the Beehive “to guard the bee”, as the Simpsons gag went, a joke currently popular in Wellington political circles). But a lot of the time what soft voters want from their old party is an acknowledgement that their grievances have been heard, and when the party ditches the disliked policy or unpopular leader, the soft voters return.

But that depends on whether they like the new National leader. Muller is still virtually unknown to the public: I don’t really know what he looks like, even though I’m looking at a photo of him on the RNZ website right now. And his party needs to unite around him. If the deposed Bridges-Bennett faction wages a covert war of revenge against Muller, leaking and briefing against him the way embittered Labour MPs did during that party’s years in the wilderness, they’ll only ensure themselves more years in the wilderness.

(And on a personal note, I’m glad to see Bennett is no longer part of the leadership team of one of our major political parties. The meth-testing scandal is probably the worst thing I’ve ever seen in New Zealand politics: the government wasted over $100 million dollars throwing the poorest and most vulnerable people in the country out of their homes during a housing crisis, for no reason other than they wanted to look tough on drugs. It ruined lives, it was utterly pointless and evil, and while there was a lot of blame to go around, Bennett was minister of social housing and one of the major architects of the policy. She never apologised for any of it, and she should never be in any position of responsibility, anywhere in this country, ever again.)

The current round of polls aren’t just bad news for the National Party. Both of the government’s support partners, the Greens and New Zealand First, are either below the 5% threshold or, in the case of the Greens in the Reid Research poll, dangerously close to it. The Greens probably have enough core supporters to stay alive in September, although at these numbers all it would take is high voter turnout or a few blunders in the campaign to see them wiped out.

New Zealand First is in a much more difficult place. If the National Party can lose that much support without any gains going to New Zealand First then the party might simply be unelectable. They’re unlikely to change leaders because the party is the leader, and he can’t make himself more attractive to anti-Labour socially conservative provincial voters by collapsing the government, because not even Winston Peters’ supporters would reward him for doing that in the middle of a pandemic. National’s leadership team might be willing to work with him – but the brief height of Simon Bridges’ popularity came after he ruled out governing with Winston. Peters is likely to do whatever it takes to win media attention and votes, and that might test Jacinda Ardern’s leadership more than anything either Simon Bridges or Todd Muller could throw at her.