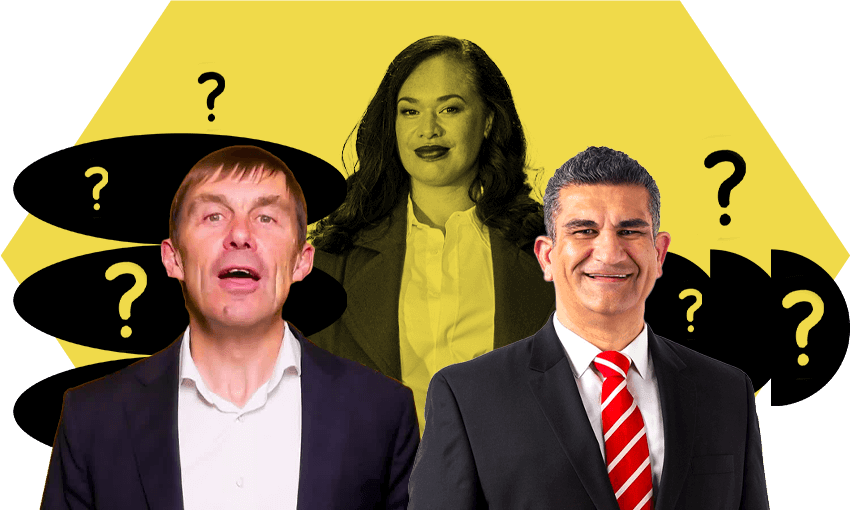 Of the three frontrunners for the Wellington mayoralty, only one has so far announced an actual run. Tory Whanau is in, but Andy Foster and Paul Eagle are yet to declare. Image: Tina Tiller

Of the three frontrunners for the Wellington mayoralty, only one has so far announced an actual run. Tory Whanau is in, but Andy Foster and Paul Eagle are yet to declare. Image: Tina Tiller
Opinion

With less than three months until voting starts, a bunch of issues to address and a challenge to engage the public, it’s not good enough that the current mayor and his likely Labour challenger are still delaying their runs, argues Toby Manhire.

Difficult though it may be to conjure up two less sexy words than local government, there can be no doubting its importance. The too often hapless and moribund state of local body politics is everywhere to see, from sluggish housing infrastructure to dysfunctional public transport, from the fountainheads of three waters to the suspension of the democratic vote in Tauranga.

So with voting opening 12 weeks from today, anyone who wants to lead a council should be striving already to cut through to voters who are distracted, disaffected or just plain indifferent. That’s not the status of all voters, obviously, but I think it’s safe to say most. Three years ago, turnout across the country was 42.2%. The most meaningful finding in a poll of Aucklanders published last week was that, despite being urged to pick one of five candidates for the mayoralty “even if not entirely decided”, 53% nevertheless selected undecided/don’t-know. Just as well, perhaps, there was no idgaf option to choose.

In Auckland, the effort to jolt voters awake has begun, with the first of many debates last night attended by seven candidates. In Wellington, however, it would be a monologue. Former Green Party chief of staff Tory Whanau so far stands alone (or nearly; rank outsiders Ray Chung and Barbara McKenzie are also in the mix), having announced her candidacy more than six months ago. Sitting mayor Andy Foster is expected to have another bash, but inexplicably is yet to say as much. Plans by Rongotai MP Paul Eagle to contest, meanwhile, are variously and rightly described as an open secret or Wellington’s worst kept secret. But still a city waits. Absolutely Procrastinatey Wellington.

It isn’t difficult to speculate on the reasons for the delay – and speculation adores a vacuum. Eagle is Labour through and through, and will be seeking not just the endorsement, which is the best the party can offer in Auckland, but a place on the party ticket. That decision would come from the NZ Council, Labour’s governing body, and they’re likely to set some demands for their blessing. Before putting Eagle on the ballot, they want their ducks in a row.

It’s made more complicated thanks to the byelection that would be triggered by Eagle, a former deputy mayor, boomeranging back to local politics. Rongotai is a safe seat for Labour, but that presents more of a banana skin for a governing party than a safe seat for National does. In Tauranga, Labour could, and did, preface pretty much every sentence with Not that we have a chance of winning this but. In Rongotai, where current councillor Fleur Fitzsimons is tipped as a likely Labour candidate in the carousel of politics, it’s not just a resurgent National they have to worry about; the Greens came second in 2020 in both candidate and party votes.

After months of beltway whispers and media reports about Eagle’s imminent run, with former Beehive staffers reportedly preparing the ground, it is getting kind of ridiculous. It may not be scandalous for an MP to survey his constituents’ views on the state of the city – or for Parliamentary Services to spend $500 spent promoting that survey on Facebook on his behalf – but in the circumstances it’s no wonder people are suspicious.

As for Foster, the question is simple: with the clock ticking, why not let Wellingtonians know whether they should be putting their minds to your credentials for re-election? Maybe he’s genuinely yet to make a final call, but should he choose not to run again, then he should get out of the way so another centre-right candidate can – maybe Sean Rush or his close personal friend @localbod1.

John Key inadvertently picked a fight with parochial Wellingtonians nine years ago by calling the capital a “dying city”. That was hyperbole, but not without a seed of truth. It remains a very special place, but goodness knows it could use some blood pumped into the body. What is uncontroversial, with pipes exploding around every corner, is that it is a drying city.

Those pipes, the broader infrastructure puzzles, getting intensified housing right, responding to earthquake code shifts, unlocking public transport, addressing the climate emergency, the need to nurture the social, cultural and creative soul of the place – it’s a daunting list. There’s much to debate. As a Dominion Post editorial urged through justifiably clenched teeth the other day: “Hurry up and declare so we can turn to the issues. The future of our capital depends on it.”

The countdown is on. The lack of clarity from likely contenders looks less like a question of committing to the city and more and more like cynical smoke and mirrors. Opaqueness and rumour make a rotten springboard for a mayoral campaign. And every passing day is an insult to Wellingtonians.