Faced with the almost unimaginable misery in Afghanistan, I am once more begging the government to open its heart to more refugees, writes Meg de Ronde, executive director of Amnesty International New Zealand.

Mahbouba Seraj delivers her words in anger and frustration. She is a leading Afghan human rights defender who has championed the rights of women for decades. Her fury is palpable. She’s enraged at all that work, all that freedom for girls and women, lost again in just a few short weeks.

We are the figure-eight snake eating its tail. We are Bill Murray waking up to yet another furry rodent. We are once more glued to our screens at 1pm for Ashley and Jacinda. And here I am, once more asking the government to open our collective hearts to refugees. It is all the worst aspects of deja vu.

In September 2015, Alan Kurdi’s lifeless little three-year-old body washed up on a beach in Turkey, his hair slicked across his perfect wee head. We were shocked. The world paid attention to Syrian need for what seemed like a crucial defining moment. In New Zealand, thousands joined us to hold candles and urge the government to immediately raise the refugee quota for those fleeing war. We took so few people fleeing then. We still take so few people now.

I have spent the last six years campaigning for the government to be more compassionate with refugee numbers and step up to our international commitments. It took three years and a change of administration before the government doubled the quota of refugees. Although, following the advocacy of many, John Key’s National government was the first government to raise the quota number when he announced 1000 places in 2016.

Doubling the quota made everyone feel good, but it means getting only 750 more people to safety per year – a number we haven’t even fulfilled due to Covid. And it took the work of hundreds of people and thousands of voices to get us there. It also took three years, the work of countless organisations and 10,000 signatures to get real commitments to the community refugee sponsorship programme (CORS). The CORS programme is an innovative way for communities to resettle people seeking safety. However less than 150 people will be brought to safety via this scheme in New Zealand over the coming years. 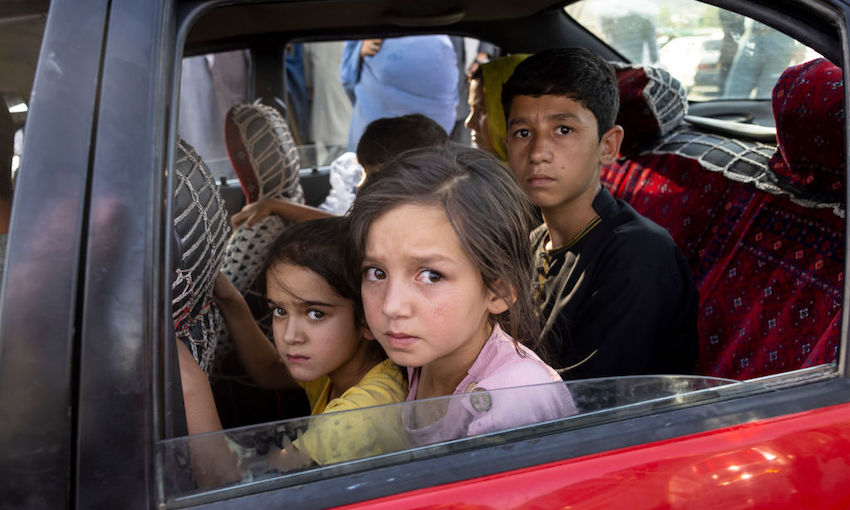 But nothing we are feeling can compare to the Groundhog Day that the courageous people of Afghanistan are facing again. Our weariness is nothing compared to the Hazara community, who once again are being targeted by the Taliban. Our frustration is minuscule when you think of the women who have built their careers over decades but who now hide their achievements, in fear for their lives. While we deal with the fear of once again being locked in our houses due to Covid, many Afghans are in hiding because of reports of Taliban going door to door to kill people.

While the Taliban have told the world this is a new regime, our own Amnesty investigators documented the brutal killings and torture of Hazara men only last month between the 4-6th of July. The horror took place in the village of Mundarakht, Malistan district. The deaths likely represent only a small part of the violence the Taliban have carried out in the area as they’ve also cut mobile phone coverage making it difficult for accounts to get out.

In the face of terror, swift decisions have been made by New Zealand before. The government took our troops to Afghanistan in 2001 when our allied partners called on us. Back then the world was shocked by another image. Few can forget seeing for the first time the two planes flying into the World Trade Center towers. The images of desperate people throwing themselves from the buildings as they burned and collapsed is forever etched on my mind. And our government moved swiftly in response. Within a month a motion had been passed in the house by prime minister Helen Clark and our SAS landed in Afghanistan only three months later. We would commit our resources there for the next 20 years.

So in the year 2021, where nothing is certain, where fear repeats and where governments have been called on to do extraordinary things in the face of global uncertainty, what will it take to move our government into action for those in Afghanistan desperately needing our help? I had thought it would be the images of Zaki Anwari. He was a talented 17-year-old soccer player. Somebody’s bright-eyed boy. And last Monday video footage circulated of his tiny body, so high in the air, falling from an aircraft as it left the tarmac in Kabul, Afghanistan. He was one of many desperate people trying to leave as the city fell to the Taliban. So desperate he’d clung to the outside of a plane as it took off. He did not survive the fall.

Afghans do not have the time to wait for us to mobilise tens of thousands of New Zealanders to petitions and vigils and advocacy meetings. They don’t want our compassionate thoughts; they need our action. The New Zealand government must urgently announce refugee support over and above our existing commitments. They must recognise how crucial this moment in time is, and truly be kind.

For god’s sake, Afghanistan is dying. We cannot let them think nobody cares. We must reach out our hands through this nightmarish Groundhog Day and offer some hope of a safe tomorrow.

To urge the government to do more for those trapped in Afghanistan add your name at amnesty.org.nz.