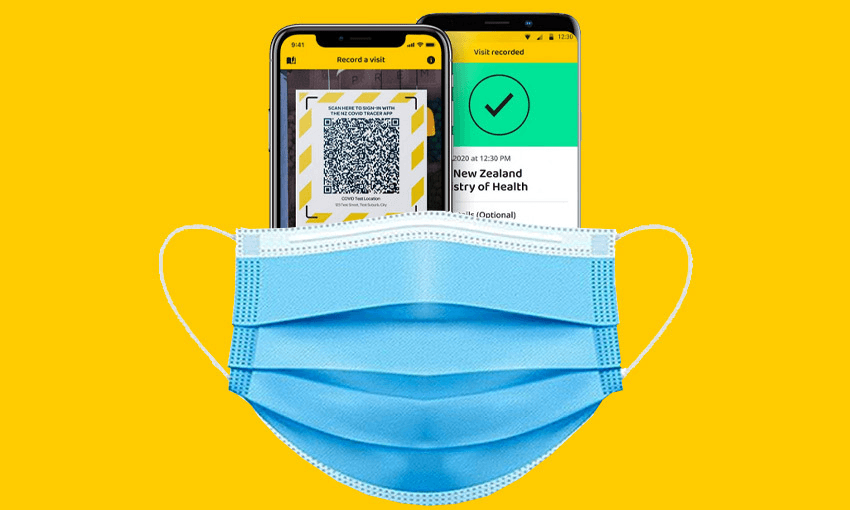 Thanks to two new government decisions, masks and record-keeping will be a far more common part of daily life from now on. But how will implementation actually work? Law professor Andrew Geddis considers some knotty legal issues.

When Covid first came a-knocking, there seemed a reasonable chance that with a few weeks of sacrifice we might be able to pick our collective lives up again largely unchanged. For a while, we almost did. Six60 packed out Eden Park. Rugby games became so omnipresent that we remembered why we got bored with them before the virus hit. We even had four months of freely jumping over the Tasman to visit family, see friends, and hang out in Melbourne’s overrated coffee joints.

But now that SARS-CoV-2 G/478K.V1 (to give the Covid delta variant its full science name) has broken through our borders, “normal” life looks to be effectively over for the foreseeable future. Two big steps this lockdown round signal that this is the case.

The first is mandatory mask-wearing when going into supermarkets or other essential businesses. Sure, we’ve had requirements to wear masks on public transport and airplanes for a while now, but those have been treated more as a form of strong guidance than rigorous rules. This time, not only are the legal rules being strictly enforced, but the norm of mask wearing is overflowing into other public spaces. Even though masking-up is not mandated for walking on the streets, lots of people are choosing to do so.

It’s not yet clear what the government’s plans are for masking requirements once we move out of level four into whatever delta-inflected future awaits us. Professor Michael Baker, who has been arguing the value of masking-up for a while, thinks that they’ll become a routine part of any responses to future outbreaks. But how often and for how long, and whether mask wearing becomes just something we do regardless of formal legal obligation, remains to be seen. As Sir David Skegg told The Spinoff, widespread mask wearing involves a trade-off between safeguarding physical health and social connectivity. That very well may be a price worth paying — but it is still a price.

The second big development is the just-announced mandate for record keeping at “busy places and large gatherings”. This change apparently was on the cards before delta showed up in our community, driven by the fact that we collectively haven’t been very good at scanning or signing in. Workplaces have had to display QR codes and have other record-keeping systems and processes in place for quite some time now. It’s just that no-one had to actually make use of them. And so, hopeless creatures that we are, only a small minority of us did. Call this the “Sandra Goudie” problem; please, please call it this.

Consequently, a week after moving out of level four, two new legal requirements will come into force. Everyone going to “busy places and events” (the list of what counts as such is here) will have to scan or sign in. And those in charge of such busy places and events will be under some sort of obligation to make sure that they do so.

There’s still quite a bit of squishiness around this announcement. For one thing, the list of what qualifies as a busy place or event has some fun fishhooks in it. The government seemingly has decided that it would be too burdensome to require retail outlets – including supermarkets – to comply with mandatory contact tracing obligations. Meaning that you’ll have to scan or sign in to pick up a coffee from your neighbourhood café (and it will have to ensure that you do so), but not if you get your caffeine fix from the coffee counter at your local supermarket. Or, maybe that coffee counter actually is a “café” within the supermarket, and so you will have to scan or sign in to get a coffee there … but not if you go in to buy a bottle of milk and loaf of bread. Such are the problems of line-drawing in law.

And it’s not just businesses or institutions that are going to have to grapple with the new rules. “Social gatherings” appear on the list of required scanning or signing in. Previous definitions of social gatherings have included any event of any size where “people are intermingling in a group”. Assuming the same definition is kept in place, if you’re the host of such a social gathering you’ll be responsible for making sure everyone who attends it scans or signs in (unless everybody at the event knows who everybody else is and how to contact them). Looks like future house parties won’t just need to worry about noise control coming knocking on the door.

It’s also unclear exactly what the responsibility to ensure scan or sign in means. Here’s what the Covid-19 website says: “Relevant businesses and locations will be responsible for having systems and processes in place to ensure, as far as is reasonably practicable, that customers or visitors make a record. There will be guidance developed to support businesses to comply with the new requirements.”

A lot then hangs on what “as far as reasonably practicable” might mean. It must be something more than just making a QR code and sign-in sheet visible. After all, workplaces already must display these, and we all know how badly the nation’s Sandra Goudies have been at using them. So, will the requirement to ensure customers or visitors make a record simply involve asking them if they have done so? Or, will it extend to independently verifying that they have done so? And, does it then obligate refusing entry or service to anyone who refuses to do so? I guess we’ll just have to wait and see what the “guidance” says.

I suspect that any remaining uncertainty will then be dealt with through prosecutorial discretion. A public library that lets a belligerent “I’ll never scan your Deep-State, NWO tracking code” individual push through its doors just won’t get prosecuted (but that brave freedom-loving individual might). Conversely, a pub that doesn’t make any effort to get its patrons to register their presence because “we know who our regulars are” very well may get prosecuted. And in between such cases will be the inevitable grey areas where we lawyers love to live.

What the new scan or sign-in obligation does represent, however, is an effort to bring about a shift-change in our social behaviour. We by-and-large collectively function on the basis that what we do in our lives is our business alone. (In practice, of course, the omnipresence of cellular devices and social media company data collection has made “it’s solely my business what I do and where I do it” largely illusory, but we ignore that fact because give us convenience or give us death.) That presumption then made us really bad at registering our movements; scratch our skin and not far beneath lurks our own private Sandra Goudie. And being bad at registering our movements stuffs up the contact tracing process, resulting in even worse impositions on our liberties when delta arrives, as we’re seeing at the moment.

For that reason, shifting our social behaviour through mandatory scan or sign-in requirements actually is a freedom-enhancing move. One thing, however, that I do think should be considered is some sort of legislative guarantee that the information gathered can only ever be used for Covid-related contact tracing purposes. As Andrew Chen points out in his excellent post on mandatory record-keeping for contact tracing – go and read it as soon as you finish here – other jurisdictions have found such information very useful for other purposes. And while our police and other government organisations have promised they will not do likewise here, the value of that promise without legal backing can always be questioned.

Because, I’m very happy to be required to register my movements for the purposes of helping combat a life-and-health threatening pandemic. As I say, doing so strikes me as being a low-cost, high-value response. But using the Covid threat as a Trojan horse to build up a record of citizens’ movements for other purposes (no matter how “justified”) would be a real betrayal of our collective commitment to keep each other safe and well.