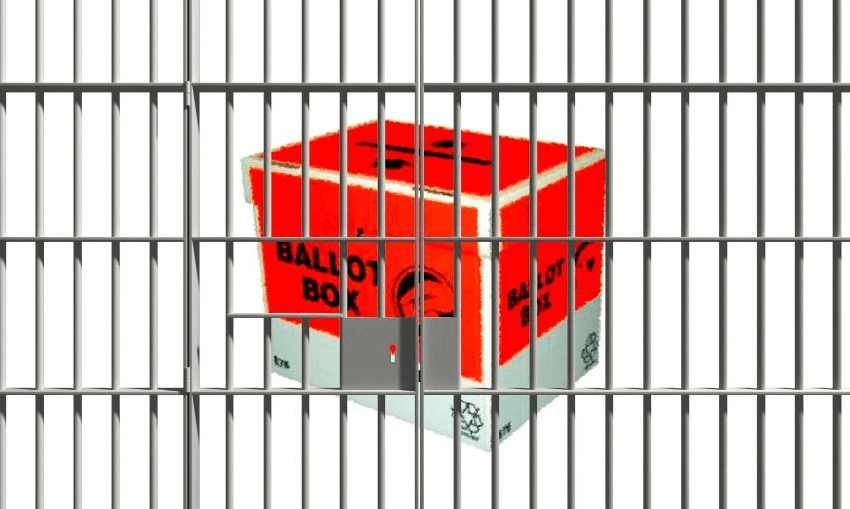 The prisoner voting law and the dawn of the zombie electors

Finally, voting rights for prisoners serving less than three years has been restored. It’s a cause to celebrate, but it appears to have been overshadowed by some procedural games and unhelpful amendments, writes Andrew Geddis.

Last night should have been a cause for muted celebration in parliament, with the Electoral (Registration of Sentenced Prisoners) Bill’s final passage through the house partially erasing a stain on New Zealand’s democratic system.

It’s a drum I’ve been beating for the past decade, but denying all sentenced prisoners the right to vote is a pretty petty thing to do. Here’s my view from 2010 – in what remains the most read thing I have ever written – regarding the Bill that removed all prisoners’ voting rights:

This proposal is downright wrong in its intent, outright stupid in its design and (if finally enacted) would be such an indelible stain on the parliamentary lawmaking process as to call into question that institution’s legitimacy to act as supreme lawmaker for our society.

(And if you think this was a tough analysis, check out Grant Robertson’s characterisation of the 2010 law in the final speech in parliament before it was passed – noting also his words on why changing it matters so much to him personally and the country generally.)

So, as you can imagine, I’m firmly of the opinion that Wednesday night’s reversal of that 2010 law and restoration of voting rights to prisoners serving sentences of less than three years is A Very Good Thing. It’s not the perfect thing. As Graeme Edgeler wrote in a submission on the current law, which he then kindly allowed me to join:

I support the overall intention of this bill. Indeed, I believe it should go further. I consider that being sentenced to imprisonment should not, by itself, remove the right to vote. I would welcome any further opening up of the right to vote, including, for example, raising the threshold, and encourage the Committee to recommend this to the House.

That also was the view of the Ministry of Justice, which in its initial advice on the issue recommended that “removing the disqualification of prisoners from voting entirely is the best option. It is the only option that removes the significant human rights and Treaty of Waitangi issues in the current law. This option is consistent with NZBORA, our international human rights obligations and the Crown’s Treaty obligations. It would return New Zealand’s law to the position that existed in 1975–1977.”

Nevertheless, this is one of those situations where the perfect may well have been the enemy of the good. The bill as just passed can be readily justified as a simple return to the status quo before the procedurally deficient 2010 law change took place – a status quo, remember, that parliament unanimously had agreed to in 1993. And, if you want a reminder of just how (un)seriously those who removed the right of prisoners to vote in 2010 viewed the issue, watch this low point in the history of New Zealand’s parliament.

Also, if we’re going to be ruthlessly pragmatic, the just-passed bill likely was as much as the minister of justice, Andrew Little, could get out of New Zealand First. National was never going to support any move to reverse its legislation despite Nick Smith’s alleged distaste for electoral law changes made on a purely party-political basis. So, NZ First’s nine votes got to decide how far the law will change. In politics, the first thing you need to learn to do is to count.

So, last night should have been a cause for muted celebration in parliament. Unfortunately, it appears to have been overshadowed somewhat by some procedural games played during the bill’s committee stage.

So, what do the amendments as passed actually say?

First of all, the rights of prisoners sentenced to three or more years in prison to enrol to vote (much less cast a vote) remain unchanged. The as-amended law still says that prisoners serving three or more years are disqualified from registering on the electoral roll. And under the Electoral Act 1993, only someone whose “name lawfully appears” on the electoral roll may vote.

However, the Green/National supported amendments now require prison managers to tell all prisoners, not just those serving sentences less than three years, that they have the right to enrol to vote and are also legally obliged to do so. This is despite the fact that if any prisoner serving three or more years actually goes ahead and tries to enrol, the Electoral Commission still must refuse to enrol them.

To put it crudely, the Green/National Party supported amendments require prison managers to lie to (some) prisoners.

In addition, the Green/National Party supported amendments remove the Electoral Commission’s power to take off the electoral roll any registered individual who is then sentenced to three or more years in prison. However, because such prisoners are legally disqualified from registering, their name then will not “lawfully” appear on the electoral roll and hence they can’t vote.

So in effect, they become “zombie electors” – a term I totally just invented myself. Their names will be on the electoral roll, but without any legal right to actually vote. And as such, the Electoral Commission will have to find some way to tag such individuals to ensure that any attempt to cast a vote on their part gets weeded out. More work for them to no apparent benefit.

None of which makes any sense at all. I’m not sure the National Party will care all that much given that it looks like sloppy lawmaking by the government and is going to eat up some more time in the house to fix. When you’re in opposition, you take your “victories” where and how you can find them.

But the Green Party needs to think hard about whether the passage of its amendments – well-intentioned as they were in light of their support for all prisoners being able to vote – has improved the law. Andrew Little has signalled that he wants them removed next week. They really ought to support him in doing so.