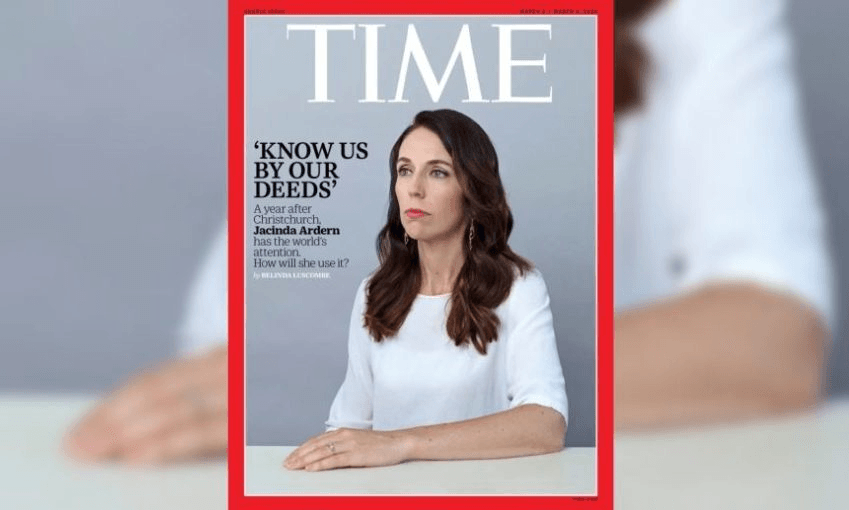 Jacinda Ardern featured on the cover of Time magazine to mark the anniversary of the Christchurch mosque shootings of March 15, 2019

Jacinda Ardern featured on the cover of Time magazine to mark the anniversary of the Christchurch mosque shootings of March 15, 2019

A new index ranking ‘soft power’ praises ‘a shining example of how to build a tolerant and inclusive society in the face of adversity’ – and offers a rejoinder to sneers at the prime minister’s appearances in international media, writes Toby Manhire.

At the end of last week of Jacinda Ardern appeared on the cover of the international edition of Time magazine. The response was a now familiar mix of reflected glory, meme-generation and disdain. Among the detractors, naturally, was the Royal Neanderthal Order of the Book Turners. Even Simon Bridges had a minor swipe at the Time appearance in his criticism of disappointing child poverty data.

This morning on The AM Show, host Duncan Garner castigated the prime minister for being “absent on the tough stuff”, for “dodging questions”. He may be right on that: certainly it’s hard to argue that she’s not doing everything she can to dodge the issue of Winston Peters and that SFO investigation. But then he went on to link it to something else: “The view overseas is shallow. They don’t see the detail,” he said. “It’s like a kids’ picture book.”

What is more, while some of the international coverage of Jacinda Ardern in the first year of her prime ministership is absolutely guilty of fawning one-dimensionality and just plain creepiness, in recent times that simply hasn’t been the case. A number of newspaper articles have gone out of their way to summarise the criticisms of Ardern’s government. The Time article itself explores the recent domestic pressure. If anything it’s rapidly becoming a cliché to point up the contrast: this very morning across the Tasman the ABC has a post headlined “Jacinda Ardern’s leadership under question in New Zealand despite being lauded abroad”.

But the more important point is this: it’s part of the job. In the cause of what people used to call “New Zealand Inc”, the prime minister of course needs to be out there building our national profile, whether it’s The Late Show with Stephen Colbert, Time magazine or whatever. And it’s not as though Ardern required, as her predecessor did, a $10,000 outlay to get on American TV.

It’s about more than just advertising the latest Air New Zealand route, too (that’s direct to New York from October, international readers). In the Time article, author Belinda Luscombe makes the point herself: “Ardern has infused New Zealand with a new kind of soft power.” It’s an observation buttressed by a new index, published today and trailed as “the world’s most comprehensive research study on perceptions of soft power”. The Global Soft Power Index, produced by Brand Directory, ranks New Zealand 22nd of 60 countries, based on surveys of public opinion and experts. It would rank higher still, it explains, but for questions of scale and remoteness.

New Zealand rates especially high (fourth overall) on “People & Values” and 11th on “governance”. Both, the report suggests, are in large part “a result of the progressive leadership of Prime Minister Jacinda Ardern, who has been lauded on the global stage for her response to a number of crises since the terrorist attack in March 2019”.

It adds: “New Zealand is certainly punching above its weight in the Index, especially considering its modest population and isolated location. The nation maintains a solid reputation, which has arguably continued to grow exponentially over the last year or two under the respected leadership of the socially progressive Jacinda Ardern. The nation can serve as a shining example of how to build a tolerant and inclusive society in the face of adversity.”

Soft power – a term coined by US academic Joseph Nye in the late 1980s – describes the way that geopolitical influence can be achieved through culture or persuasion rather than the hard power coercion of military or economic muscle. Ardern’s response to the Christchurch attacks wasn’t, of course, designed according to any sort of soft power calculus. That doesn’t mean it hasn’t enhanced New Zealand’s reputation and influence.

(The placement of the US and the UK as first and third in the Global Soft Power Index may raise a few eyebrows. The top spot is explained like this: “The United States has shown that, ultimately, despite the reputational challenges of impeachment and unpredictable foreign policy, its position as the rule-maker in the international system and the world’s only soft power superpower is unrivalled, and it will remain so as long as its economy, media, culture and science reign supreme.”)

So here’s a thought: scrutinise Ardern and her government in general and in detail, continue to demand answers and accountability, but don’t confuse it with the international exposure. Ardern didn’t run out of time to buttonhole Winston Peters because she was chatting to Time for half an hour. I for one welcome the glowing international press for New Zealand politicians, even when it’s one of them autographing a nang.

Jacinda Ardern named world’s second greatest leader by Fortune magazine
Jacinda Ardern really did make a splash on the world stage
‘Girlfriend, you are so on’: the curious Jacinda Ardern fixation in the US Democratic race
A step-by-step guide to writing a Jacinda Ardern profile