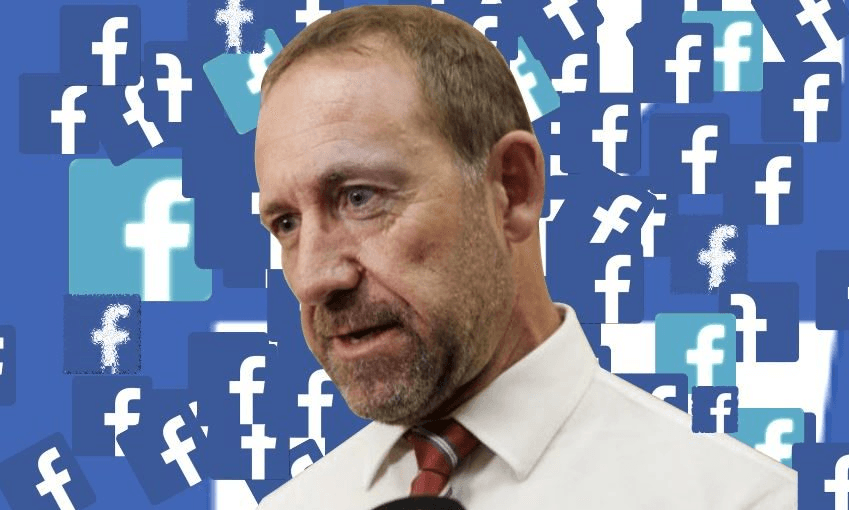 Andrew Little: NZ is watching Facebook closely and will take action if needed

The justice minister tells the Spinoff he’s keenly watching the UK-led inquiry into fake news, disinformation and Facebook and backs calls for the company to be held accountable.

As global pressure to hold Facebook accountable for its impact on democracy mounts, New Zealand’s justice minister has told the Spinoff he is actively monitoring events and considering the influence of the social media giant here.

Amid what has been called a “global trust crisis” for Facebook, representatives from seven international parliaments that make up the “international grand committee on disinformation and ‘fake news’” gather in London today to quiz Richard Allan, the company’s vice president of policy solutions. While New Zealand is not represented on the grand committee, Andrew Little said he was nevertheless “watching very keenly what they’re able to achieve”, and welcomed “a point of accountability for organisations like Facebook”.

The committee had urged the all-powerful Mark Zuckerberg, who is both chairman and CEO of a company that can boast more than two billion regular users worldwide, to appear before them in person or via video link, but he has declined, a decision scolded as “dismissive”.

“The committee still believes that Mark Zuckerberg is the appropriate person to answer important questions about data privacy, safety, security and sharing,” it said in a statement.

“The recent New York Times investigation [“Delay, deny and deflect: how Facebook’s leaders fought through crisis”] raises further questions about how recent data breaches were allegedly dealt with within Facebook, and when the senior leadership team became aware of the breaches and the spread of Russian disinformation.”

Last week Raymond Huo, the chair of the New Zealand Justice Select Committee, said that he had had “not had any contact with or correspondence from international counterparts” in the international committee, which includes chairs from parliamentary committees in Canada, Ireland, Argentina and Brazil.

“The powers that a House of Commons select committee has tend to far outstrip what New Zealand select committees have, so good on them for doing what they’re doing and really pressing Facebook for that information,” said Little.

“This is on our radar, we are thinking about it, and that’s why I’ve particularly asked for the committee to look at it,” he added, in reference to the Justice Committee’s inquiry into the last election.

“We are thinking about what we can usefully do.”

Little said the global social media companies had shown an increasing willingness in the last couple of years to tackle misinformation on their sites.

“How you draft regulations or laws that require them to do that in certain ways with certain objectives I think is hugely difficult,” he said.

“Because it transcends borders and therefore nation states, the question is what do you do at a global level or an international, diplomatic level… The only recourse then is international agreement and international law. And getting that to fly with the likes of Russia and some of the big countries, and places where some of that interference is sourced from, is going to create its own problems.”

Little said he had recently had a briefing from Twitter, but had not had any direct engagement with Facebook.* “In opposition I had two meetings with Facebook representatives. I haven’t had any in the year since I’ve been minister of justice. Which is not to say that it won’t happen or that I won’t seek it out. But I haven’t to date. At some point it may be appropriate to do so.”

As part of the New Zealand Justice Committee’s inquiry into the last election – something undertaken after every election – members are tasked with considering “the increased importance and use of social media in campaigning, advertising, and expression of political opinions”, chairperson Raymond Huo told The Spinoff last week.

In a letter to Huo from late October, Little urged the committee to pay particular attention to “the resilience of our electoral system against foreign interference risks” and to “provide any recommendations for improvement, and reassure the public that they can vote and participate in future elections with confidence”. That should include asking “whether there are sufficient protections against interference via electoral advertising, including through social media”, Little wrote.

Little’s office also released to The Spinoff a briefing note from the Ministry of Justice, dated November 1, surveying “US studies on the efficacy of ‘fake news’”.

“There are increasing expectations on social media companies to take steps to protect the integrity of their platforms,” it observes.

“Facebook and other companies have undertaken significant efforts to detect and remove fraudulent accounts. We can and should expect these companies to be vigilant given the potential implications. As these companies are based offshore, any attempt to regulate content will be resisted (see for example testimony of Facebook, Twitter and Google before the House of Commons Inquiry). The companies make the case that authoritarian regimes would likely take advantage of any precedent to order the removal of allegedly fake news.”

It concludes, under the heading “Potential policy responses” by saying: “There may remain options to regulate social media in way that does not unduly impinge on rights. We will watch developments in the UK carefully, and also consider what options might be available domestically. We can expect the Justice Committee when looking at electoral advertising rules to consider whether those rules need updating to better meet the challenges of online content.

“Finally, this is an issue that might be addressed multilaterally with like-minded partners. It is an issue of concern and potential vulnerability for many open democracies. We will continue to monitor international developments and support efforts to engage social media companies to take appropriate actions consistent with New Zealand’s democratic values.”

Little also confirmed his intention to see new privacy legislation updated in the wake of Privacy Commissioner John Edwards’ broadside against Facebook over its refusal to comply with requests under the NZ Privacy Act. “As long as Facebook has an office and a presence here, we’ve got to be able to issue meaningful corrections to them if we think they’re not in compliance with our expectations.”

* Update: The minister’s office was in touch shortly after this piece was published to say that he “briefly met with a Facebook government relations advisor in May this year in relation to changes to the Privacy Act. ‘My advisor says Facebook repeatedly requested meetings and the May meeting was brief but registered in the ministerial diary.'”