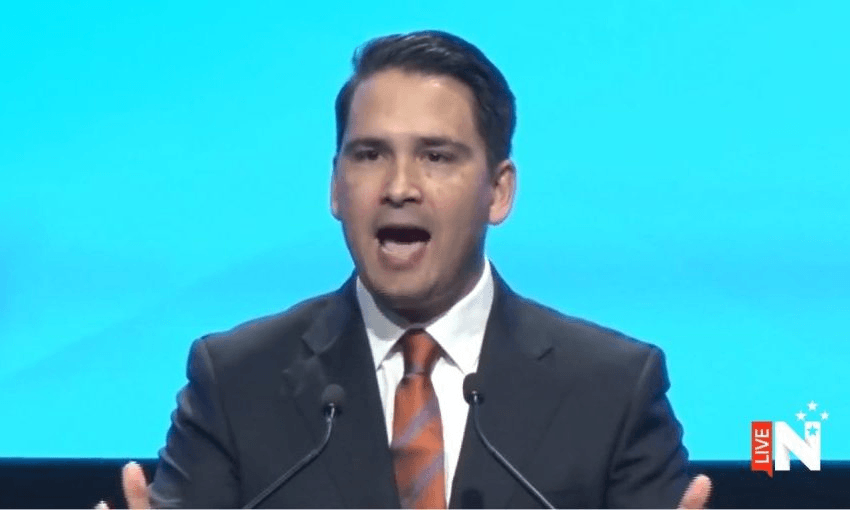 Simon Bridges’ big conference speech: did he drum up a new National vision?

In presenting himself with a new, softer image, the National leader’s conference speech sought to move beyond relitigating the fights of the past, writes Ben Thomas

Simon Bridges is keen to avoid the mistakes of the past.

The video warming up his speech to the National Party conference today showed a montage of his life, including still photos of police cars and press reports from his time as a prosecutor, held together by cut shots of the National leader drumming diagetically along to the score in a studio, all as if to say: this soundtrack is extremely legal.

As the opposition leader less than one year into a new government headed by a popular prime minister, Bridges main task is to move on from relitigating the fights of the past.

He wasn’t helped by the conference special guest, former Australian Prime Minister John Howard, who yesterday called the 2017 election result “unjust and unfair”, with the party finding itself out of power after nine years despite a large plurality of votes.

That sense of grievance represents an ongoing danger for such a uniquely large opposition: rather than styling itself as a keen and fresh government in waiting, there could be a temptation to act more like a government in exile; the Antipodean equivalent of mid-20th century Europeans gathering in upstairs London flats, dressed in epaulettes and brocade, to hold mock cabinet meetings for far away lands from which they had been driven by revolution or war.

That was the thinking behind his release of a rival medicinal cannabis bill this week that policy watchers declared better than the government’s attempt – an unexpected and largely successful raid into Labour territory. Far from being an obstructive “opposition from hell” as some had worried, Bridges seems intent on getting National ready to take the reins again in 2020.

Bridges said he didn’t want to be in government “just because Labour are incompetent”, but because National had a compelling vision for the future.

That’s just as well. It’s easy to identify the gap between Phil Twyford’s ambition and the reality of being able to build 100,000 new Kiwibuild homes in the face of land use, infrastructure and construction capacity constraints. It’s harder to explain what the National government would done to help the housing crisis it spent years denying existed. As Bridges himself said in his speech, there’s a perception the left “cares” more than the right does, and even if its not true as a general rule, National didn’t help its cause on housing or mental health.

If the recent regional tour has had any effect, his public speaking seems more fluent and confident. If his style has become slightly more hokey, as if he has been presenting It’s In The Bag dozens of times rather than National’s vision of the future, it’s also more sincere and missing the perpetual hint of a smirk that used to be a trademark.

The bulk of Bridges’ speech was recognisable from the past ten years: talk of New Zealand as a “confident” nation, trumpeting the reversal in Trans-Tasman immigration during the National years, and boosting the importance of the economy. Doing the crime if you do the time, and no free lunches for beneficiaries.

But the speech was setting up a softer public image for the opposition leader. He was joined onstage by his wife Natalie, who he described as a “leftie”, and – after they were rounded up – his sons and new daughter. The new policy announcement was about children.

Bridges said the young need “less Facebook, and more facetime”. Without seeing the capitalisation in Bridges’ speech notes, it wasn’t clear whether he meant more personal attention for children, or that National planned a bold pivot-to-video strategy for our primary schools.

It turned out to be the former:  Bridges promising smaller class sizes for primary schools. The details will be filled in by education spokesperson Nikki Kaye through discussion documents and policy papers in time for a comprehensive platform at the 2020 election. It will require significantly more teachers than the 1500 new positions pledged by the Labour government in this year’s budget; it will allow National to contrast payrises for possibly striking teachers with better teaching standards for kids. And it shows off Simon Bridges, young father, talking about the opportunities he wants all kids to have.

It’s all about stressing the positive for National for now: restoring charter schools, more teachers. There’s no talk yet of whether the significant big ticket items of identified waste, such as free tertiary fees, would be rolled back under National. Those are tougher questions, the necessary trade-offs the government is finding after years of casual promises.