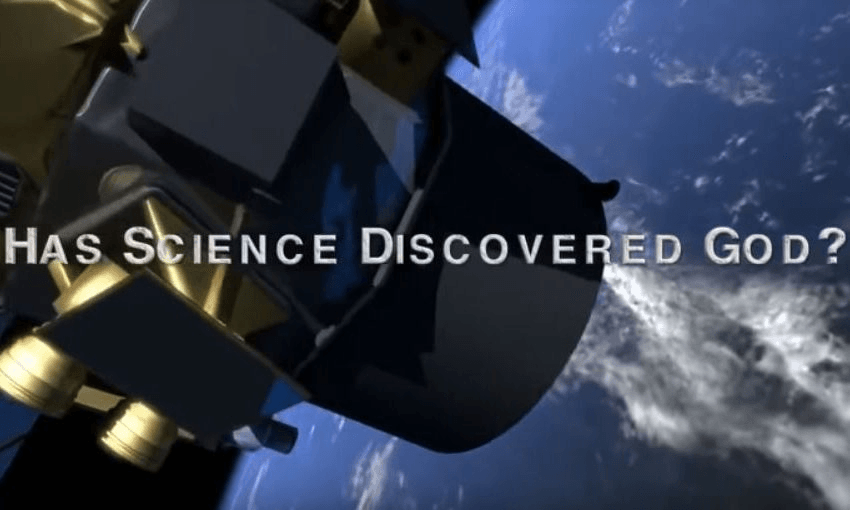 ‘Really, really bad’: the Proof of the existence of god video

This creationist claptrap has absolutely no place in a science class

‘Really, really bad’: the Proof of the existence of god video

Given how often astrophysics shows up in the news, you might think it was one of the biggest branches of science. And yet, everyone working in my personal subfield (the cosmology of the early universe) would plausibly fit into a single 777. Per participant, astrophysics – and its sibling, astronomy – may be one of the most mediagenic fields of human endeavour.

Consequently, I was not particularly surprised to get a media query on Sunday asking about the beginning of the universe. However the stories we generate (“underground lake on Mars”, “cosmic rays from come a distant galaxy”) often function as highbrow entertainment, since they usually lack the potential for controversy and conflict. So I was surprised that the query was part of a hard news item about creationism had apparently been screened during science classes at an Auckland school.

A key part of the story was a 30-minute video reportedly played by a science teacher to a high school class, claiming that astrophysicists increasingly acknowledge that the origin and structure of the universe are evidence for the existence of God. I confirmed to the reporter that this would indeed be news to many astrophysicists, including this one. I watched the video, gave a couple of pithy quotes about its accuracy and appropriateness for a science class, and got on with my day.

However, the story is about more than a dodgy science class. While the identity of the teacher was not known to me when I offered my comments, she has since been reported to be the sister of the current leader of the opposition, Simon Bridges. More than that: his party had, over the weekend, doubled down on its support for charter schools. The school in which the video was shown is not a charter school, but its parent organisation runs two of them in Auckland and the issue lit up Twitter for most of the day.

And at the end of that day, here are my personal takes.

Just which video are we talking about here? It has 12 million views, so you don’t need to worry about driving a few extra hits their way. You’ll never get that 30 minutes back, though, so click wisely and hit stop when you’ve had enough.

The school in question is not a charter school. Mt Hobson Middle School is run by Villa Education Trust, which also runs charter schools. The Newsroom story was clear about this, but it got lost in the telling on Twitter.

The video is really, really bad It should embarrass its makers. Beyond the cheesy music, it cherry-picks quotes from people like Stephen Hawking, whose opinion on religion was unequivocal. “I regard the brain as a computer which will stop working when its components fail,” he said. “There is no heaven or afterlife for broken down computers; that is a fairy story for people afraid of the dark.”

Given his life-defining battle with ALS, Hawking was probably more aware of his own mortality than most of us, but his particular foxhole housed an unapologetic atheist. Quoting him to bolster a creationist argument seems patently dishonest from the outset.

Can you give another example? At the eight-minute mark, the narrator – quoting Hawking again – intones: “If the rate of expansion one second after the Big Bang had been smaller by even one part in a hundred thousand million million, the universe would have recollapsed before it ever reached its present size.” This is presented as an example of “fine tuning” since, if things were ever so slightly different, the universe could not provide a home for human beings. This line of reasoning goes by a number of names – the “God of the gaps“, the “watchmaker argument“, or the “teleological argument“; claims that the universe shows evidence of purpose and design in ways which cannot be plausibly accounted for by blind chance are a longstanding part of debates around the existence of God (or gods). We are asked to draw the inference that the “fine tuning” of the early universe which ensures that human beings can appear on schedule is part of God’s handiwork.

This apparent “tuning” is undoubtedly a feature of the first mathematical descriptions of the Big Bang which  were written down in the 1920s, and most scientists did see this as something that needs an explanation. Hawking certainly wrote the words attributed to him: they are from Chapter 8 of his blockbuster, A Brief History of Time. However, by the 1980s (when Hawking wrote his book) we had a far more sophisticated understanding of how the early universe might have worked, and much of Chapter 8 is spent explaining the idea of “inflation”, a burst of exceptionally rapid expansion that can occur right after the Big Bang. Inflation would drive the universe toward this state of balance, removing the need for any supernatural explanation. To be clear, the status of inflation is an active research topic today (I spend a lot of my time thinking about it) but anyone who has read Chapter 8 – including the makers of the video – should know that this quote misrepresents both Hawking and the science.

I could go on; there are dozens of howlers. But life is short, whether or not divine judgement waits for us at the end of it. Even if you believe in God, the video is not even honest creationism, if such a thing exists.

What does this incident tell us about the school? No-one seems to dispute that the video was played, but minimising it as a conversation starter or “just one viewpoint” will not inspire confidence. If this was part of a wider programme to slip creationism into science classes, it speaks to a failure of leadership and, I believe, integrity. On the other hand, if this was simply a good teacher having a bad day, the implications for the school depend on whether it passes it off as a legitimate teaching strategy or promises that it won’t happen again.

Why not teach kids about creationism? For me the question comes downs to honesty and openness; I am not aware of any credible arguments for the existence of a deity which are rooted in what scientists actually know about science, so creationism shouldn’t be taught in a science class. On the one hand it’s only half an hour and at least one kid seemed to spot that it was garbage. But to be clear, there is no way to present this material in a science class without misrepresenting the science and undermining the principles and values you are supposedly imparting to your students.

Are cosmologists all atheists? No, we’re not. I know, respect, and work with cosmologists who are devout adherents of most of the world’s major religions. I also know plenty of noisy and outspoken atheists in science. (In fact, given this diversity of viewpoints my own suspicion is that science and religion actually have far less overlap than both hard-core atheists and creationists seem to think.)

Am I an atheist? Yes, I am, but I don’t think it makes much difference here.

What would I do to help? If any New Zealand school – charter, private or public – is looking to improve their science teaching I would be happy to talk to them, or put them in touch with colleagues who could help.