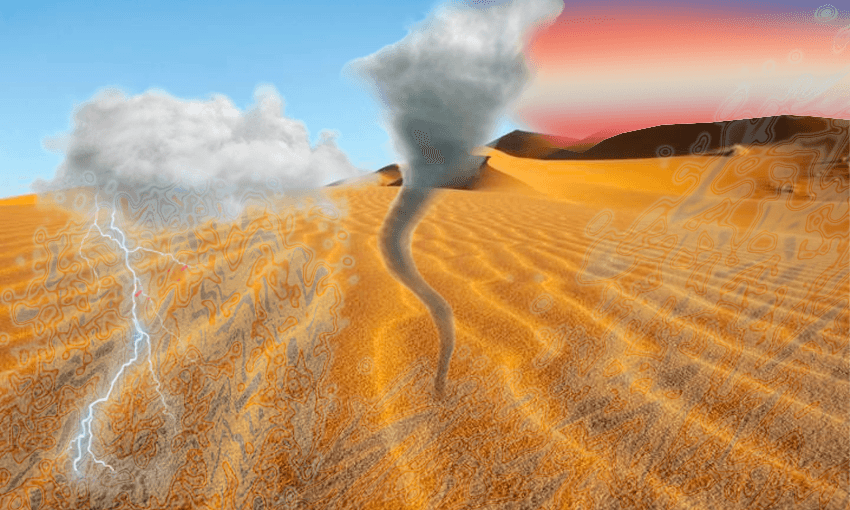 Weather forecast: everyone gets everything

Summer has begun and the forecast is: it’s hot and breezy and wet and dry. We explain what’s going on, and what you can expect over the coming months.

A cloudless sky rains down on dry soil, and children play in the hot puddles. Every night you put the laundry in the oven, grab a plate of Chardonnay, and turn on the radio. It’s time to watch the weather.

Coming this week, says your choice of weatherperson, half a metre of rain is falling sideways down south. The north is avoiding bad weather completely except for the gales in Wellington and the downpours in the Bay of Plenty and the high fire danger in Gisborne.

Basically, the degree of incoming weather chat is set to burst the barometer. To master the art of climate observing in this, our most hectic of times, please read this handy explainer.

Can I go to the beach this weekend?

Yes! “Hot water beach” is about to be re-named “normal temperature water beach” because the ocean is warm now! Get in there, kids!

The entire North Island will be dry as a bone by the weekend, except for the Bay of Plenty and Taranaki. It will also be really hot. The South Island will be hot but also very rainy on the West Coast, but there’s nothing new there. Pop up the Marlborough Sounds for your beach trip.

Is it going to be hot?

Yes – from now until the end times! Although everyone gets rain, everyone also gets sunshine. The North Island has a go first and then around February the south gets a turn on it.

This weekend Gisborne and Hawke’s Bay are once again taking the cake for heat, with temperatures around 30 degrees. Auckland will be very muggy, and Christchurch will have mid-20s temperatures with a strong breeze taking the edge off.

Temperatures are expected to be above average everywhere, forever. Some weather forecasters are saying the coming months will contain “heatwaves,” which seems kind of obvious because it’s summer, and also because the planet is on fire.

Will there be wind and rain?

This week there are wet northerlies over the whole country fighting with high-pressure heat coming off Australia, so the North Island is getting steamed. Oh, the humidity!

The South Island gets a breezy start to the summer, with strong winds buffeting Cantabrian cows and tearing apart the Kurow hay bale art installation. Storms are expected in Fiordland, Westland, the Alps, and the Bay of Plenty.

In Wellington, persistent showers and gale force winds are expected not just now but at every point in its history. You can’t beat Wellington on a good day, and its good day should turn up around Christmas.

Flooding is expected on the west coast as Papatūānuku drags Greymouth gold back underground where it belongs. Actually, any South Islander living next to a river should put their belongings high up this week.

How will the weather affect primary industries?

The weather is as cooked as a Kerikeri car bonnet, and the fish are as confused by this as we are. Sea snakes and kraits are turning up in Taranaki and Tauranga, snapper are moving to the South Island, and cod are fucking off to Antarctica. Fisherpeople may need longer lines or larger hunting grounds to find where our favourite seafood stores are chilling out.

Dry soil in the north and the east of the North Island is bad news for both farmers and cafes, as the Australian drought pops over and sinks its hot little claws into our local avocado farms. Rain will come, but not soon enough. Napier has already put water restrictions in place, and we know the Wairarapa struggles to cope with the dry season. Later in the summer, Canterbury and Gore will likely put restrictions in place.

Why is this happening?

The summer’s hectic start is a little more dramatic than most years, but not wholly unusual. “The spring weather pattern in New Zealand doesn’t really stop until the end of December,” said WeatherWatch’s Philip Duncan. However, the scale of the unsettled weather is pretty abnormal. “What is unusual is the size and depth of the storm down in the Southern Ocean for this entire week,” he said. This storm is responsible for the South Island’s wind and rain this week.

“At the same time, the top of the country has an almost non-stop subtropical airflow not just for the end of November but the start of December,” he said. This is what’s keeping temperatures high. The source of all the hot air is, as usual, Australia. “This is the reason why the upper North Island and the eastern North Island are showing signs of being quite dry now.” Sadly, the Southern Ocean storm is too far away to soothe the dessicated land.