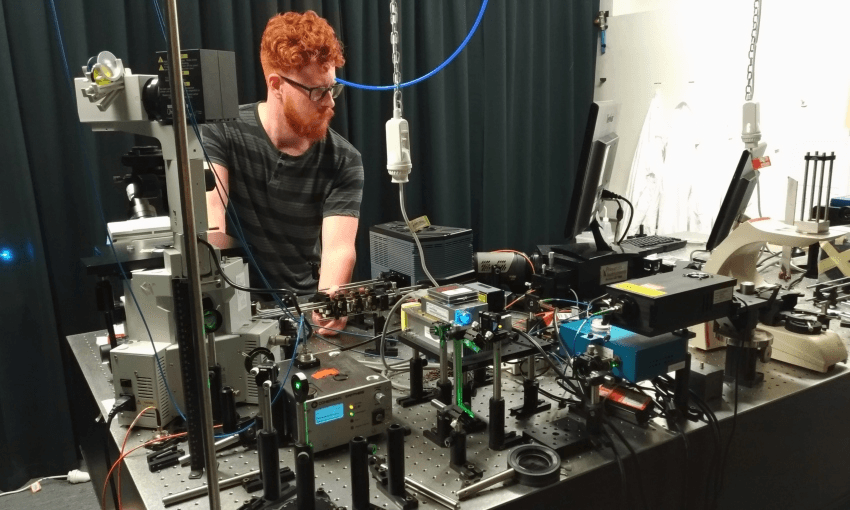 WTF is molybdenum disulfide? An expert on why this nano-material matters

Sam Brooke is a Ph.D student at Massey, who is working with the MacDiarmid Institute. He talked to Alex Braae about his research, why it matters, and how it became possible to do it in New Zealand.

To be on the leading edge of science, young New Zealand students would have once had to go offshore.

That would have been Sam Brooke’s lot. He’s a top materials science student currently doing his Ph.D at Massey University. The expertise, technology and funding for the work he wanted to do would have been possible in Australia, but probably not here.

But then the MacDiarmid Institute stepped in, offering Brooke the chance to stay in New Zealand. Not only that, they made the sorts of introductions he needed to meet experts worth working with. In a burgeoning career in academia, those sorts of connections are crucial for students to learn and grow. And the MacDiarmid Institute’s reach means that it’s not so much that he’s just going to one university – it’s more like he has aspects to collaborate with five, along with two research organisations.

His doctorate, supervised by MacDiarmid Investigator Associate Professor Mark Waterland and Professor Richard Haverkamp, is on the intimidating topic of Molybdenum Disulfide Nanoribbons for Catalytic and Electronic Applications. But as he explained to The Spinoff, it’s actually not so hard to understand why this is a vital field of research for future developments.

Can we talk about what exactly your thesis is about? And maybe start with the first three words? Molybdenum disulfide nano-ribbons?

Right, so molybdenum disulfide is a class of two dimensional material. So what that means is that it has some extended dimensions – imagine a sheet of paper. The thickness of the paper defines one of the dimensions of the material. So in this case, we’re talking about a sheet with a single layer of atoms.

Right, so it’s similar to graphene?

Yes, very similar. And that dimensionality gives it some interesting physical properties. When you take essentially a thin strip of a sheet like material, like a ribbon, that defines it in another dimension. So the idea is that by controlling the dimensions, you can alter the physical properties in any way you want. So you can tailor the material.

So that’s the catalytic and electronic applications part?

Yeah, so it’s a multi-talented being. Molybdenum disulfide is surprisingly good at hydrogen evolution catalysis. So if you look at all the green technologies today, you might see hydrogen being touted as a fuel source of the future, because when you burn it with oxygen you just get water – no pollutants.

Yeah, it’s also a semi-conductor material, which means it could potentially be used in electronic surfaces, to make a thin flexible display. And then you can modify the material in a number of ways to change those properties – it’s quite a talented material.

Indeed – is there something about those applications that made you want to study this area in particular?

It was less about the applications of the material, and more about the fact that it was an interesting nano-material. I’ve always been interested in carbon nano-materials since undergrad, and this was kind of an extension from the classic graphene and carbon nanotubes. It’s interesting for a lot more reasons, and it’s great to have a range of goals you can steer the project to if one becomes interesting.

Does that open up post-thesis options as well?

In a way. Because it’s something with so many interesting applications, it entirely depends on where the research goes. Hopefully the thesis will help me broaden the skills, and my supervisor is really interested in following all the avenues. So if I find something interesting, he’s totally fine with me disappearing for a while to follow it up.

Is this stuff general knowledge around the country’s science departments? It sounds incredibly specialised.

Well, at the very least the things we want to do and research here, and the equipment we need, that specialist gear and knowledge is available in New Zealand. For example Victoria in Wellington has all of the ultra-fast spectroscopy – that’s a technique looking at incredibly small timescales to observe the how electrons behave within molecules and materials. Auckland has something called the Photon Factory, which is a research and development group facility – they do a whole lot of interesting stuff with light and lasers there. There’s hydrogen evolution expertise at both, there’s more optical expertise at Otago. In New Zealand, what we do know, we know very well. Overseas, they can do a lot more things, but they might not necessarily know how to get the best out of those systems.

You mentioned what’s going on at a few unis there, but you’re a Massey student – how does that work?

Well, I can eat and live because the funding for my research comes from the MacDiarmid Institute, and they get together and find cool projects for multiple universities to work together on. All these people might be at different universities, but they’re just interested in doing some cool science, right? Usually that means when you talk to other people from other universities, they have different perspectives that you might not have figured out on your own. The MacDiarmid connection also means you can access equipment from all of the institutions and Universities who are involved with the research.

What does a normal day look like for you?

That’s tricky. Sometimes I might get stuck on a single problem for a day. But over a week I might make or modify some material, so it will typically start around that. So once I’ve made it, I get to characterise it and run some tests on it. That usually involves going to the laser lab at Massey to do raman spectroscopy on it, and that’s one major thing we do. We also have some really good electron microscopes, so that’s another technique. And then it’s basically back to the office to try and figure out what it’s all trying to tell me. Often I’ll write some python code to manipulate the graphs and data, and then I’ll bang my head against the wall and go see what my supervisor thinks about it.

It’s something often asked of PhD students, but do you have any sort of work life balance at all?

Well, yeah, that’s tricky. It depends how much you want out of it, and what your supervisor wants out of it. The university expects a certain amount of time out of you but it’s by no means an unreasonable amount. So it really depends how you manage it – I tend to work really really hard during the week and then take weekends off.