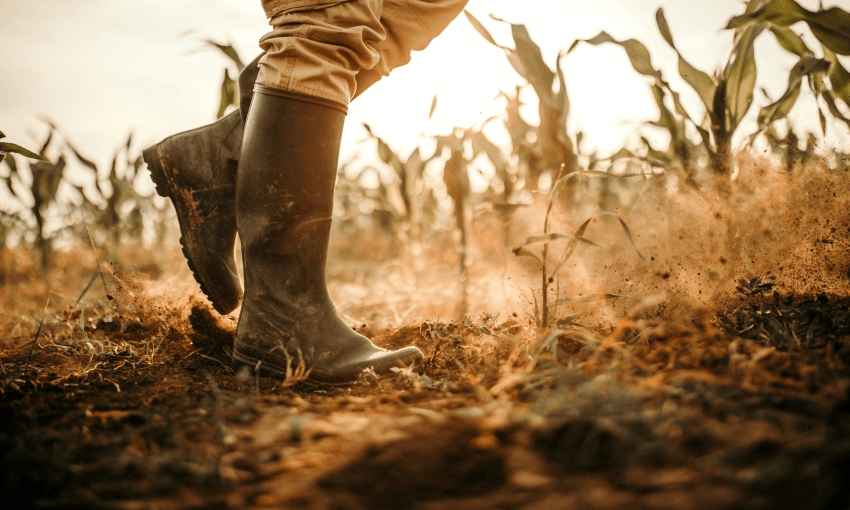 Harvard professor Dan Nocera has long been electrifying the scientific world with his work on harnessing the untapped potential of solar energy. But his research into the creation of a new type of fertiliser, shared at the MacDiarmid Institute’s AMN9 conference, could have dramatic implications for New Zealand. Alex Braae reports.

It’s always an interesting question to ask someone what they’d do if the New Zealand government gave them a billion dollars to work on a project. For Harvard University professor Dan Nocera, who has been a Plenary speaker at the MacDiarmid Institute’s AMN9 conference this week, the answer is simple.

He’d build a pilot reactor, two or three stories high, which could house his bionic photosynthesis technology. From there, it could pump out bio-fertiliser that could radically improve crop yields, help sequester huge amounts of carbon and store it in the soil, and dramatically reduce the amount of runoff from farming that ends up in rivers. The kicker? “I wouldn’t need a billion, I’ve built pilots before. I think with $25 million you could get really solid data. I want to get a pilot to the point where a major partner could come in and engineer the hell out of it, and then start widespread implementation.”

In 2011, Professor Nocera’s research team announced they had created an ‘artificial leaf’ – effectively a piece of solar technology that conducted photosynthesis at a much more efficient rate than plants could manage – specifically to separate hydrogen and oxygen. That could have significant benefits in terms of generating hydrogen for fuel – a potential source of energy that could be significantly cleaner than the fossil fuels that currently power the industrialised world.

In 2017, it was the ‘bionic leaf,’ which turns solar energy into biomass and biofuels, using a genetically modified bacteria to do so. The process behind that can also be used to make biofertiliser, which tests have shown to be astonishingly effective. When it was applied to effectively dead soil, it increased the yield of a crop of radishes by 300%. That means it could be used to grow food almost anywhere, even with the most depleted soils. The bacteria doesn’t end up in any of the food, either, but New Zealand’s GE free policy would still be a hurdle

The biofertiliser is also ‘carbon negative’, which means that it helps sequester carbon from the atmosphere back into the soil itself. It’s estimated that if this soil was applied across the USA, more than 900 million tons of carbon could be stored in soil every year – though for scale, the USA produced more than 5 billion tons of carbon in 2017. Currently, around 2% of the world’s energy use goes towards the creation of fertiliser, which produces a huge amount of carbon emissions in the process, because the required hydrogen to make ammonia is taken from natural gas.

“The fertiliser thing has legs,” says Dr Nocera. He likens regular fertiliser to being a bit like sodium chloride – also known as table salt. “It’s an ammonium salt. And so as a salt, it dissolves in water, so you get massive runoffs, it just goes with the water stream. My nitrogen isn’t a salt – it’s a solid biomass in the bacteria, and that only has runoff if the whole particulate soil runs off, which is erosion. So if there’s no erosion, I don’t get any runoff.”

Sound familiar? Environmental activists are currently pointing the finger at fertiliser companies, arguing that the runoff is poisoning waterways. The quality of freshwater has become a source of huge angst for many New Zealanders, and this biofertiliser could help repair some of the damage. It’s also more efficient, given that runoff takes nutrients with it that are useful for plant growth, which makes it very close to being a self contained system.

Currently, pilots are being conducted overseas to build reactors in which this process can take place. In practice, a farmer could even set one of these reactors up at their own farm, or have a movable reactor temporarily visit their farm to drop off fertiliser. That’s the sort of development that would push this from a nice idea, to an actually scalable business model.

What is the government’s role in all of this? Professor Nocera sees it as being to “de-risk” the process, so that then major companies can come in and give it the investment that is needed to take it to market. But why can’t it be governments themselves who scales these projects up, if they’re so important?

Basically, because they don’t have the money to go up against what is described as ‘legacy infrastructure’ – already existing technology that has been heavily invested in by corporate giants, to the point that it reaches economic maturity. It’s one of the huge problems in the drive for clean energy at the moment, that oil companies are so heavily entrenched, that they can’t simply be dislodged – they have to have a carrot dangled in front of them to convince them that switching to something better is worth the effort.

Currently, because that legacy infrastructure exists, that means there’s basically no market to make the switch. “When I give public talks, everyone thinks that Exxon Mobil is out to kill me, or Shell, and they’re trying to stop this, but they aren’t,” says Professor Nocera. “The reason it’s not penetrating is because there’s no discovery that any of us could make, that would replace a $17 trillion investment.” It’s the major reason why he redirected his research away from a focus on fuel, towards a focus on biomass and fertiliser instead. There is legacy infrastructure around that, but Professor Nocera’s approach could already be relatively economically competitive against it – and that’s especially the case if environmentally damaging externalities were priced into the system.

But because of the success this bio-fertiliser has been shown to have on dead soil, the potential market is huge, and bigger than the existing fertiliser market itself. That’s currently worth about $200 billion worldwide. On the other hand, re-energised soil could be worth hundreds of billions more, given the billion hectares of infertile and degraded soil around the world, and the growing global population.

There’s evidence as well that the government is taking Professor Nocera’s ideas seriously, or at the very least is interested in hearing him out. Professor Nocera has now had a few conversations with officials at MBIE, and has nothing but praise for how the NZ government has committed to tackling climate change. Minister of Research, Science and Innovation Megan Woods, who spoke at the opening of the conference, told the room that “we must actively encourage partnerships between industry and deep science, to develop sustainable innovations, that help New Zealand adopt new technologies and clean energy solutions, which combat the impacts of climate change, resource depletion, and environmental pollution.” She wasn’t speaking specifically about Professor Nocera’s research, but the parallels aren’t hard to spot.