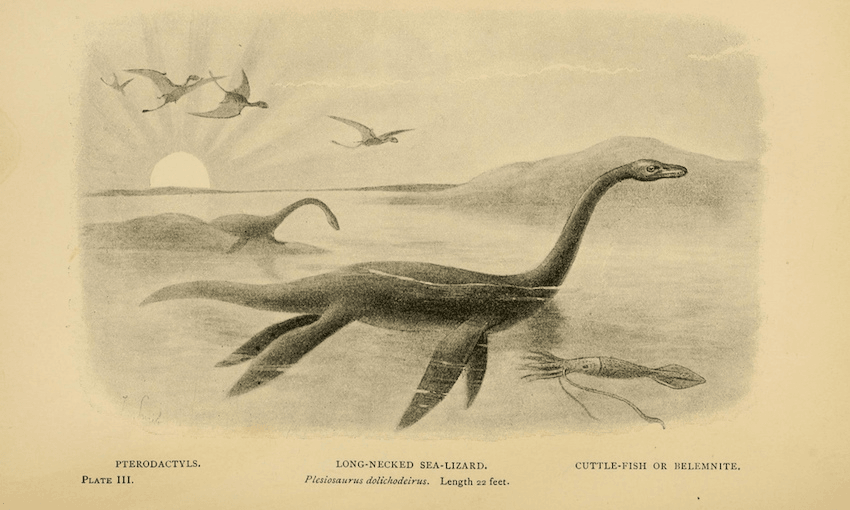 An image depicting a Plesiosaurus, often thought to be the forefather of the Loch Ness Monster, from a book on “Extinct monsters” (London :Chapman & Hall,1896) biodiversitylibrary.org/page/14893427

An image depicting a Plesiosaurus, often thought to be the forefather of the Loch Ness Monster, from a book on “Extinct monsters” (London :Chapman & Hall,1896) biodiversitylibrary.org/page/14893427

The editor of Dunedin’s student magazine may not like it, but the University of Otago’s hunt for Nessie was science communication at its finest, argues Ellen Rykers.

In a recent column, Critic Te Arohi editor Joel MacManus lambasted the Loch Ness “monster hunt”, calling the scientific project and the University of Otago’s promotion of it “embarrassing and expensive”.

It was a disappointing take that thoroughly missed the mark.

Professor Neil Gemmell’s madcap endeavour isn’t really about searching for a mythical creature. The Loch Ness monster is simply a hook. And it’s an ingenious example of science communication.

Let’s be real: most people aren’t going to click on a story about environmental DNA methods. But a story about one of the world’s most enduring mysteries? Hell yes!

Instead of trying to make people care about a niche piece of science for its own sake, Gemmell repackaged it in a plesiosaur-shaped Trojan horse.

Now, thanks to Nessie, millions of people around the world have heard about this cutting-edge tech – and perhaps gleaned some understanding about how the scientific method works.

As palaeontologist Dr Darren Naish pointed out on the Tetrapod Zoology podcast, “When a journalist asks, ‘Are you looking for the Loch Ness monster?’ You don’t just say yes or no. You contextualise it.”

Indeed, in the extensive media coverage, Gemmell talks about what eDNA is and why we should study it. In this way, he’s tapping into the excitement inherent to any monster mystery, while keeping the investigation rooted in scientific rigour.

Where does the university’s comms team fit in with all of this? I get that a likely objective is brand recognition – especially overseas so they can attract cashed-up international students.

But they also have a mandate to assist researchers in communicating knowledge and ideas beyond the academic journal paywall. So when one of Otago’s top scientists comes up with a fun, tongue-in-cheek way to bring science to a wide audience, it makes sense they’d support such an effort.

Yes, part of this support involved sending out *shock horror* … press releases! I’m not sure why MacManus thinks this is some kind of revelation, as it is literally their job. From the university’s communications office website: “Their role is to prepare and disseminate research news releases… where we assess media interest is likely”. Comms recognised the news values of the Loch Ness story and realised it would catch on. And, lo and behold, it did.

This story, with science at its core, reached an audience that most science news never does. Gemmell estimates he did more than 50 interviews resulting in more than 2,500 individual stories. He made 15 TV appearances and received more than 30 enquiries from production companies. That’s a lot for a scientist also managing a team collecting and processing 259 samples.

More irritating than faux outrage over staff doing what they’re paid to do was the implication that the investigation makes the University of Otago “look like crackpots”. Despite MacManus’ assurance he wasn’t saying anything against Gemmell, the piece implied that any scientist who pursued cryptids like Nessie was a “fucking moron”.

Gemmell is certainly not a crackpot, nor a fucking moron, and clearly states that he does not believe in the existence of a giant, lake-dwelling reptile. The investigation is “not a simple monster hunt,” Gemmell told the NZ Herald. “Rather it is an amalgam of basic science linked to major current UK initiatives, with a strong science communication narrative that has captured hearts and minds globally.”

Connecting science with popular culture, or other things people care about, is smart. Plus, there’s a difference between legit science piggy-backing an urban legend and outright wearing a tinfoil hat.

Science doesn’t have to – and shouldn’t – take itself seriously all the time. And yes, this includes science at Harvard, which MacManus claimed would never stoop to Nessie-style silliness. Every year, the august institution hosts the Ig Nobel Prizes, which recognise “achievements that make people laugh then make them think”. That is, research in the same slightly outlandish but sneakily insightful vein as the Nessie hunt.

Ig Nobels have even been awarded to Harvard scientists, for ground-breaking investigations into why fingernails scraping down a chalkboard sound so awful, and why pregnant women don’t tip over.

I really can’t see the University of Otago’s profile being damaged by a bit of out-of-the-box science, nor the ensuing publicity. Otago is never going to be like Harvard, but we have other things going for us. Like our awesome scientists who study important topics and come up with cool initiatives to tell science yarns to heaps of people.

Instead of disparaging such scientists and their creative outreach efforts, let’s support them in stepping outside the ivory tower. Gemmell was told by some his idea was “career killing”, but over at The Conversation, he writes about the moment that convinced him to dip his toes in the intriguing waters of Loch Ness: “I was dropping my son off at school. A large posse of eight- and nine-year-olds told me they thought the idea of hunting for the Loch Ness monster was the coolest thing ever. It resonated with me and led to this opportunity to engage the public, particularly kids, in the scientific process.”

By the way, MacManus’ “spoiler alert – they didn’t find it” is a little premature. The team haven’t actually sifted through the results of more than 6,000 PCR experiments to see what’s lurking in the murky depths of the loch.

Of course, you and I both know they’re not going to find Nessie, because she doesn’t exist. But maybe they’ll detect the DNA of some other previously undiscovered organism, or an animal we do know of, but didn’t know was living in the loch. Because the point of this was never to find Nessie. The point was to use Nessie to communicate some serious science in a captivating way.