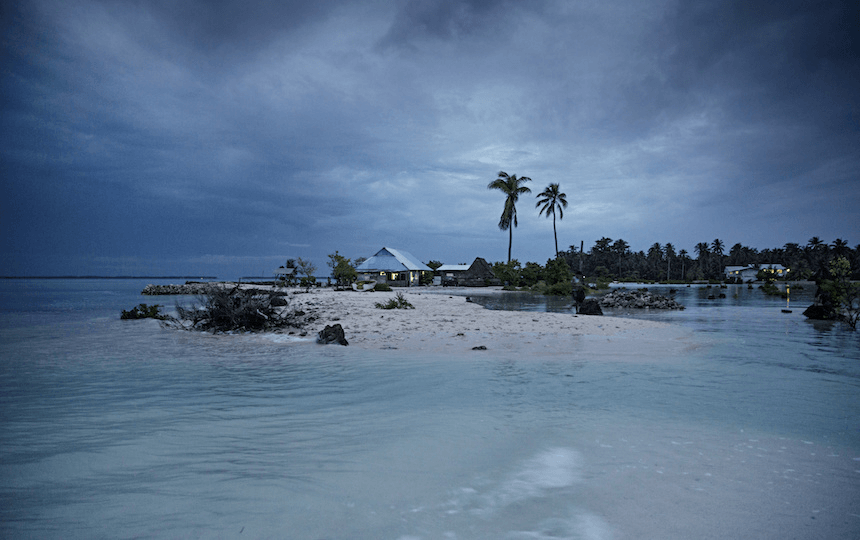 The small village Eita has become a separate island during high tide. The people of Kiribati are under pressure to relocate due to sea level rise. Each year, the sea level rises by about half an inch. (Photo by Jonas Gratzer/LightRocket via Getty Images)

Climate change is already destroying lives in the Pacific

The small village Eita has become a separate island during high tide. The people of Kiribati are under pressure to relocate due to sea level rise. Each year, the sea level rises by about half an inch. (Photo by Jonas Gratzer/LightRocket via Getty Images)

Climate change is the defining challenge of our times. The Spinoff is devoting a week of coverage to the issue, its advocates, complexities, and solutions. Today, former President of Kiribati Anote Tong says that while the rest of the world ignores the gradual onset of climate change, the lives of Pacific peoples are already being drastically affected.

In 2006, when former US Vice-President Al Gore came out with the film An Inconvenient Truth, the subject of climate change was precisely that – an inconvenient message threatening the established way of life of especially the developed world. It also challenged the relentless pursuit of economic growth of those countries that were aggressively trying to catch up to the nations that had achieved levels of material affluence never before seen in the past.

But in my country Kiribati and other similar island countries in the region like Tuvalu, the Marshall Islands, Tokelau, and communities across the Pacific, we have long known the severe impacts from what is happening to our world. Positioned barely two metres above sea level, there are already communities in Kiribati and other Pacific Island countries that have had to relocate due to the flooding of their villages, the loss of land, contamination of potable water and destruction of food crops. The change in the weather pattern has also subjected several island communities to more severe storm events. Kiribati is theoretically well beyond the hurricane belt. Yet for the first time in 2015 a cyclone, having devastated Vanuatu, veered northwards and flooded all of the islands of Tuvalu and our southernmost islands.

When I gave my first address at the United Nations General Assembly in 2004, climate change struggled to attract international attention away from the global focus on terrorism. But I had no hesitation appealing to the world about the issue that mattered most to my people. I did not have the luxury to ignore this problem. It was not until the Fourth Assessment Report of the IPCC was issued in 2007 that there was relative global consensus that climate change is indeed the result of human activity and that the scenarios of global warming and sea level rise would be disastrous for the planet, and more urgently for the most vulnerable communities.

That consensus came too late. For Kiribati, Tuvalu, the Marshall Islands, Tokelau, Wallis and Futuna, and other low lying countries in the region the brutal reality is that the future existence of our communities is in serious jeopardy. The current projections of sea level rise of around a metre within the century would be disastrous for all of these communities.

Already there are indications that these predictions are underestimates and that the melting of the polar ice sheets are accelerating faster than earlier predicted. The IPCC further predicts that even if the global community were to achieve a zero emission level today, the momentum of the greenhouse gases already in the atmosphere would continue to drive up global temperatures and sea level rise beyond the capacity of the most vulnerable countries to survive.

Beyond the Pacific we are hearing of bush fires in North America, and in Europe severe heat waves of an unprecedented scale. Closer to your home in New Zealand, a study by the National Institute of Water and Atmospheric Research (NIWA) finds that the Southern Alps has lost 34% of its permanent volume of snow and ice since 1977.

No country or people are immune to the impacts of what is happening. There is no negotiating with nature on how it should respond to the abuses we continue to pile upon her fragile system. The diversity of the landscapes for which New Zealand is so blessed and the source of her unique beauty are without doubt being threatened.

I have always believed that the greatest obstacle to achieving a really effective response to climate change has been, and continues to be, the inability or unwillingness of national leaders to fully grasp the global nature of the problem. As long as we continue to view the issue from our individual national perspectives climate change will not be resolved. So the successful conclusion of the Paris Agreement in 2015 was perhaps the most significant achievement in international collaboration reflecting a rational response to a threat of global proportions. Yet that was not an easy process.

One of the major obstacles during the final stages of the Paris discussions was whether we as a global community should aim to maintain the global rise in temperature below 2 or 1.5 degrees celsius. Ultimately a compromise text was agreed which is still a long way from addressing the problem effectively.

Even within the vulnerable islands of the Pacific, self interest pervades the response to climate change. I recall very well the press conference held in Port Moresby, Papua New Guinea following the conclusion of the Pacific Islands Forum (PIF) shortly before the Paris conference. The leaders of the more developed PIF countries argued that to go below 2 degrees would be too damaging for their economies, whereas the more vulnerable argued that it is a matter of survival for their people.

Most regrettably climate change continues to be viewed through a political lens. Within our very Pacific region we have seen radical reversals of policies on climate change with the changes in government, and of course the 180 degree turn by the United States of America on its commitment to the goals set out in Paris Accord was the most radical of all.

The science coming out of the work of the Intergovernmental Panel on Climate Change (IPCC) sounded a very loud alarm for the powerful oil and coal multinational corporations and all those whose livelihood depended on it. And of course these powerful corporations fought back, challenging the validity of the science and deliberately embarked on a very aggressive campaign to cast doubt on the conclusions of the IPCC and the fact the planet is warming.

My own personal experience in the course of my advocacy on climate change has been most revealing. In addition to the direct arguments I’ve had with fellow leaders, I have also been subject to veiled threats that the aid provided to my country could be affected by the position I take on climate change. I received a message from one of the world’s largest coal companies that told me I am wasting my time on this campaign.

But amongst the fear, Vice-President Al Gore’s An Inconvenient Sequel sounds a welcome message of optimism. That we still may be able to save this planet; that we no longer need to continue burning fossil fuel in order to maintain the lifestyles and momentum of development to which we have become addicted; that renewable and alternative energy sources are now being produced at lower costs than fossil fuel; and that coal as an energy source for the poor is no longer a valid excuse to open new coal mines.

So against these developments and with all of the science available on the dangerous path fossil fuel is taking us, why do we continue to allow those pursuing their own agenda to mislead us towards our own destruction? For the most vulnerable of us, for whom climate change is already an existential threat, our world is headed towards destruction and so far no solutions are in sight. For the rest of the world this reality is just around the corner unless we recognise that this is a crisis that affects us all, and work together to prevent it becoming a catastrophe.