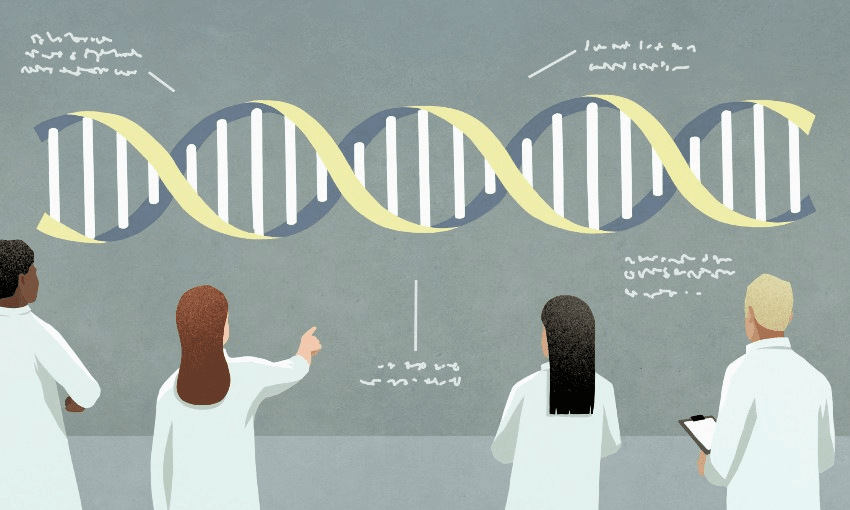 Should we all be guinea pigs for medical research?

The public health benefits are significant – so should participation in medical research be an obligation we need to opt out of, rather than opt in to?

In April, the Dunedin Multidisciplinary Health and Development Study – the Dunedin Study, for short – celebrated its 50th birthday. Staff and a few journalists assembled in the outdoor courtyard of the study’s research facility in North Dunedin, where Professor Richie Poulton, director of the study since 2000, and Dunedin mayor Aaron Hawkins both said a few words to celebrate the research and the fruitful relationship between the city and the University of Otago, where the study is based. Each gripped the handle of the same knife and sliced through a cake decorated with the number 50.

This modest affair belied the Dunedin Study’s international significance. It represents a staggering volume of data that has produced the most detailed portrait of human health and development in the world.

The study’s reliance on the same human subjects over five decades also raises an ethical question that has gathered momentum in recent years. Simply put, should human participation in health-related research be the exception or the rule? Should we view participation in research, whether longitudinal like the Dunedin Study or clinical, as an obligation? That is, instead of needing a good reason to participate in research, should we need one to opt out?

Not in attendance that day last April, but certainly on my mind, were the 1,037 people born in Dunedin between April 1972 and March 1973. Their parents enrolled them at birth in a lifelong study that will return them to Dunedin for assessments at regular intervals until they die. An assessment lasts about 10 jam-packed hours, each minute costing thousands of dollars: teeth are examined, blood tested, DNA and RNA sampled. Skulls are photographed with a 3D camera. The “retinal nerve fibre layer” is measured. Participants also undergo wide-ranging cognitive tests and “lifestyle assessments,” including questions about illegal activity and sexual behaviour. Researchers talk to families and read police records and tax and credit reports.

It’s an exhausting day, but the Dunedin Study has retained a remarkable 94 percent of its remaining 994 participants. Though the study understandably (and fiercely) guards its participants’ identities, it’s not difficult to find them if you live in Dunedin, as I do, where everybody seems to know someone who is enrolled in the Dunedin Study.

When I contacted a few participants and asked how they felt about their role, they shared a common vocabulary: “privileged,” “grateful,” “the right thing to do.” They wanted to contribute to an understanding of human health that encompasses social policy, law, genetics, and epidemiology around the world, even if it didn’t benefit them directly, and even if their individual contribution might not lead directly to a discovery.

One person described the thrill of learning the Dunedin Study had improved the lives of children in conflict with the law (the American Supreme Court’s decision to prohibit the execution of underage murderers cited the Dunedin Study, which showed most juvenile criminality is transient). Another was proud of research that showed lead exposure in children could result in psychopathologies in adults. Dunedin Study cohort and assessment manager Sean Hogan told me he visited an imprisoned participant who said he hadn’t done much with his life, “but he had done this.” Poulton said he was “humbled” by participants’ “heroic” commitment, courage, and resilience.

Such passion surrounding a heath-related research project or clinical trial is rare. How many of us willingly sacrifice our time and offer our bodies to an ongoing study for no pay or immediate benefit?

The suggestion that we have an obligation to do so is gaining traction in research ethics. The argument goes something like this: Health-related research on human subjects is a public good. The rewards are significant, from the eradication of smallpox to the development of penicillin. While money and infrastructure are essential, so are the many anonymous people who agree to take part. Since research produces knowledge beneficial to everyone, we all have an obligation to participate, for this and future generations. As you might feel obliged to vote in elections or recycle plastic, so you should obliged to join a research study.

Proponents say there’s too much free riding these days, especially when a global pandemic has shown us how important volunteers can be for clinical trials. Opting in to research can have a considerable impact. One American estimate shows that if the number of volunteer cancer patients increased from five to 10 percent, the study completion rate would drop from four years to one.

These arguments, however, don’t take account of certain realities. Not all research is ethical. Remember New Zealand’s so-called “unfortunate experiment” (1955-1976), in which women at the National Women’s Hospital in Auckland with abnormal cervical smear results went untreated, without their consent and with deadly results. Moreover, in countries such as the United States, where healthcare access is not guaranteed, many would not see the benefits of their participation, simply because they lack health insurance. Not all research is worthwhile, focusing as it does on conditions that affect a minority of the world’s population, but are nonetheless profitable to market. That is, some research is designed to make money, not make the world a better place.

If obligatory participation in research was to become a social norm, these realities would need to be addressed. In the meantime, good work is undertaken. By any measure, the Dunedin Study is worthwhile and ethical, helping the many, not the few, with participants guaranteeing their full, informed consent, and research results published widely. If we were asked to participate in such a study, perhaps we should feel a twinge of guilt if we didn’t—especially those of us like me, with a kidney transplant, who have benefitted from medical research with human subjects.

I met the avuncular Sean Hogan before the party in April. I followed his greying ponytail around the “research unit,” a warren of rooms with lime-green furniture and measuring instruments of all sorts. At one point, he had me, for the fun of it, squeeze a handgrip with a digital display to test my arm strength. I did, and the number shown seemed terribly low. “You did great,” he assured me. “You’re part of research now.” I knew he was joking, but still. It felt good.

Then he asked me if I’d be willing to be a guinea pig for the guinea pigs – to sacrifice a day a few years from now to give the various tools and instruments a test drive before the cohort arrived for its next assessment. Without hesitation, I said, “I’m in.”