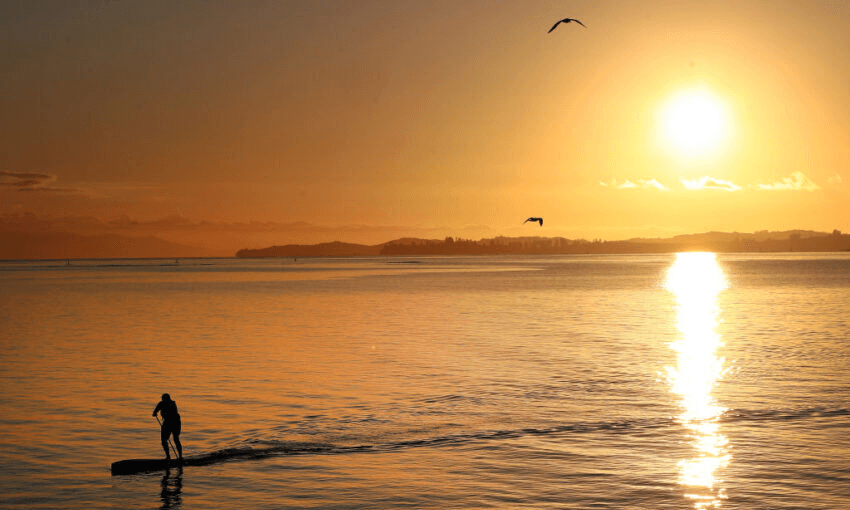 How the Covid lockdown changed our air, our water, and the sounds around us

In 2020, the Covid-19 pandemic prompted New Zealand and much of the world to undertake something few of us had ever contemplated: a near-total lockdown of society. In this Lockdown legacies series, James Dann explores the impacts of those extraordinary measures, intended and otherwise. Today: part two, environmental impacts.

This project was made possible thanks to support from the Aotearoa New Zealand Science Journalism Fund.

Human society leaves a massive footprint on the earth. We hoover up resources, repurpose them for our own needs, and leave behind a huge amount of waste. We drastically alter the air, water, atmosphere, and earth around us. One of the unintended side effects of the lockdown was that we gave the planet a much-needed, if brief, break from us. In this article, we’ll look at what that break meant for air pollution, noise levels, and water quality.

One of the first observations in the lockdown was that the air was clearer. With people staying put in their homes, and largely only venturing out on foot or by bike for their state-mandated exercise, the number of trips made in cars plummeted. This was seen in the dramatic drop in fuel sales, as well as in on the truckometer, as discussed in the opening article in this series.

Air pollution is a major health problem, with the WHO estimating that it contributed to seven million deaths worldwide each year (the coronavirus death toll recently topped one million). It is particularly bad in countries such as China and India, where rapid industrialisation and increasingly urban populations have led to large numbers of people living in areas with terrible air quality.

With the virus originating in China, and the government there rapidly moving to strict lockdowns in the worst haffected areas, the effects of this intervention on air quality can be assessed. Researchers were able to look at air quality measurements in 95 cities that locked down, and compare them to 324 cities that didn’t. They found that there were significant improvements in air quality in the cities that were locked down – though even these reduced levels of air pollution were still four times higher than the maximum level recommended by the WHO. Similarly, a reduction in key measures of air pollution was observed through lockdown in Ghaziabad, India, one of the worst-polluted cities in the world.

The results from Asia are important, but New Zealand’s location and geography are different in important ways. Dr Ian Longley is NIWA’s principal air quality scientist, and reported on changes in air quality through the lockdown period. “Lockdown has provided vivid confirmation of how in New Zealand cities, isolated from each other and international neighbours, and where heavy industry is largely absent, many pollutants can be made to almost disappear overnight,” he said. Longley studied road traffic pollution in Auckland, Wellington, and Christchurch, and showed that pollution was 5-35% of normal in level four, and between 47 and 63% of normal in level three.

A recently published study from Patel et al at the University of Auckland confirms this. Using data from three sites – one in the CBD, one out west in Henderson, and another south at Patumahoe, they were able to show reductions in four pollutant species that they monitored – NO3, Black Carbon, PM2.5 and PM10 – during the lockdown as compared to the period prior. As reported in the paper, “the stark changes in air pollution concentrations observed during the lockdown period reveal that, once key emission sources (on-road combustion powered vehicles) were removed/reduced, air pollution across Auckland reduced substantially.” The study also shows that while vehicles are key to air pollution, cleaning up our air isn’t quite as simple as taking station wagons off the streets, as Hamesh Patel observed. “Although motor vehicles are a dominant source of air pollution across the city, removing 60-80% of vehicles from our roads doesn’t equate to an 80% reduction in air pollution. These results point to the fact that heavy diesel vehicles may be contributing to a greater share of air pollution than private vehicles in Auckland.”

One observation that comes through from both these studies is that we have the opportunity to significantly improve our air quality. As Patel notes, “pedestrianisation of key areas throughout the central business district, opting for electric buses and lower emission heavy goods vehicles could have a huge impact on improving air quality, allowing future growth of the city to occur without compromising air quality and enabling Aucklanders to continue to breathe some of the world’s cleanest urban air.” And improving air quality isn’t just a nice goal to aspire to – it has real health benefits. However, as we moved down the alert levels, air pollution returned to pre-lockdown levels. The rapid improvement in air quality under lockdown shows that, if we were to make changes to the way we travel and work, then we could ensure that clearer air wasn’t just a blip.

Another thing that cars produce a lot of is noise. With the SUV parked up in the garage, this contributed to a 50% drop in human noise through lockdown. Dr Kasper van Vijk from the University of Auckland’s Department of Physics was one of the authors of a global study into high-frequency seismic noise that was published in the respected journal Science. Human activity causes vibrations that are transmitted into the ground as high-frequency seismic noise (hiFSAN). At two seismometer stations, one 380m under the city, and the other 98m underground on Motutapu Island, hiFSAN was reduced by half during lockdown, before returning to normal levels as the country returned to normal.

A number of people thought that birds, especially native birds, were more noisy during the lockdown period. There are not to my knowledge any studies to prove or disprove this. It is possible that with fewer cars on the roads, bird noise was easier to hear. It also may be explained by more people spending time outside during level four, and looking at trees rather than their phones.

With big changes in noise levels and in air pollution, it was worth looking at perhaps New Zealand’s most fraught environmental issue, water quality.

I’ve been unable to find any studies or papers that have analysed water quality in this country through the lockdown period. In many cases, regional councils only sample monthly, which doesn’t provide enough data for a month-on-month analysis. Some sampling methods involved measurements being taken by scientists in the field (or more accurately, in a river), rather than air and seismic monitoring with automated devices. During the lockdown, sample collection may not have been possible.

A couple of studies from India – one looking at a lake, another a river – have shown a marked drop in pollution levels during their lockdown. However, much of the water pollution in India is driven by direct human activity, including industries that dump into waterways, as well as people using rivers for cleaning and waste disposal. In New Zealand, agriculture is the biggest factor influencing water quality.

During our level four, farming was designated an essential service, meaning that there wasn’t any restriction on levels of activity. This is supported by StatsNZ’s data on milk production, with no significant difference between the milk production amounts in March or April 2020 when compared to the same period the year before.

Despite the dairy price index falling for the first six months of the year, the value of our dairy exports is up compared to the previous two years. Given the continuation of farming through the lockdown, it seems unlikely that there were any major changes to water quality through this period.

While issues such as air pollution and water quality can sometimes seem too big to impact, the lockdown showed that change can happen. With cars off the streets, we saw a huge improvement in the air quality in our cities, which improves quality of life as well as having many positive health benefits. While no one is advocating for a permanent lockdown, the results presented here show the potential for change born of collective action.

Tomorrow: the wider health impacts of the lockdown