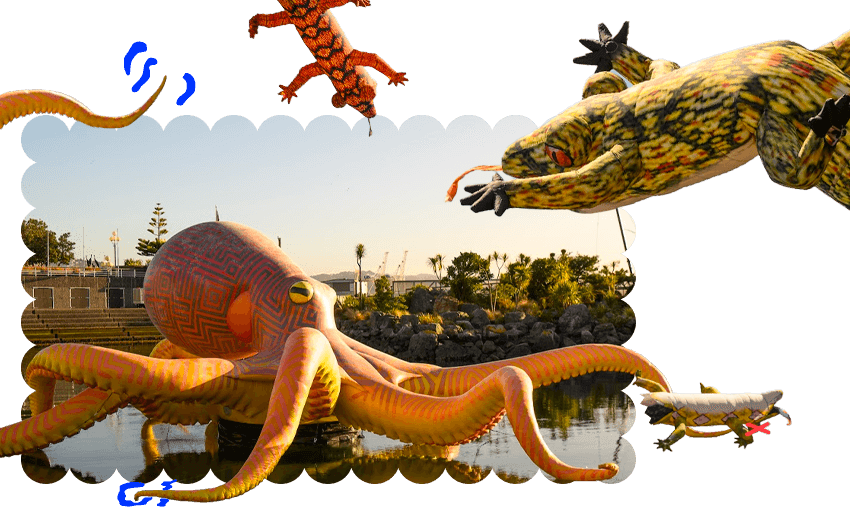 This year’s Festival of the Arts artist in focus has created a programme of free waterfront works focused on stories of the Pacific ocean. She tells Charlotte Muru-Lanning why she’s interested in moana as a connector of peoples.

The legendary Polynesian explorer Kupe is considered to be the first person to discover Aotearoa. Iwi around the country have differing accounts of Kupe and his travels, but it’s said that it was his furious pursuit of a great and wayward octopus named Te Wheke a Muturangi that led him to Aotearoa.

During Kupe’s voyages around Aotearoa, he visited and named places up and down both islands. Those pūrākau are specific to iwi, as well as connectors between. Our shared whakapapa with Kupe also connects Māori with our Pacific cousins.

One of the places Kupe is credited with discovering and naming as he made his way around the country is Te Whanganui-a-Tara, the harbour on which Wellington is now situated.

A new installation by visual artist Lisa Reihana (Ngāpuhi-Ngāti Hine, Ngāi Tū-Te Auru), created as part of the Aotearoa New Zealand Festival of the Arts, of which she is the artist in focus, honours that story and expands on it through six outdoor works. The walkable waterfront installation, Kura Moana, features playful bespoke inflatable sculptures, music, video projections and augmented pieces, all created specifically for the festival.

Kura Moana is an expression of the whakapapa that we as New Zealanders have with the whole of Te Moana Nui a Kiwa, explains festival director Mere Boynton (Te Aitanga a Mahaki, Ngāti Oneone, Ngāi Tūhoe). “For Māori, we whakapapa very closely with the people of the Pacific, they’re our ancestors,” she says.

The centerpiece of Kura Moana, an enormous blow-up wheke, rests – or perhaps more accurately, bides its time – in Whairepo Lagoon on the waterfront. As the tide goes in and out, and Wellington’s ever-reliable winds gust through, the 15-metre wide sculpture, decorated with patterns created in conjunction with a Whāngarei signwriter, naturally becomes animated.

About a 15 minute stroll away, in Waitangi Park, Reihana has created six wacky-waving mokomoko, or geckos, which flap in the wind like the attention-grabbing tubular figures that inhabit the front of car yards.

Though Reihana has worked across a wide array of mediums in the past, this is the first time she’s worked with inflatables. “I’m always kind of trying to push the boundaries of what I do and what I know,” she says. “Being the artist in focus for this festival has really given me a lovely opportunity to make something for a very different community.”

Floral lei and ei katu, made in collaboration with local Pacific Island artists, adorn the bronze statue of Kupe Raiatea, his wife and tohunga Pekahourangi at the moment of their sighting of Aotearoa from their canoe. Unveiled in 1940, the sculpture spent 40 years at the Wellington Railway Station before, in 2000, being given a permanent home on the waterfront. “As Pacific Islanders and Māori, those artworks really embody our tūpuna,” says Boynton. The lei and ei katu are a way of honouring the sculpture as tūpuna, while honouring our connections to the Pacific as well.

Near the sculpture, a new ambient track by Reihana’s partner James Pinker will play, along with ‘Aotearoa’, a song written by Ngatai Huata in the 1990s about Kupe’s wife Hine-te-aparangi. Reihana is hoping that the song “amplifies the female aspect” of the story of Kupe, bringing an entirely new energy to the heavy bronze statue.

“I’ve got some things that I’ve carried around with me for years, like pictures I have on the wall,” Reihana says. “Sometimes you just take them down or move them to another place, and you see them fresh, or you see them with a different kind of fresh set of eyes.” That’s the feeling she’s trying to achieve for people who walk past the Kupe statue every day.

At night, projections of new video works will accompany the installation. One piece projected onto Te Papa reimagines the process behind the statue of Kupe through the eyes of sculptor William Trethewey, with life models for the statue striking poses. “I’m always interested in where the artist is in work,” says Reihana, ” and what it takes to create these objects.”

Each artwork in Kura Moana behaves like a clue to a story or moment in history. Part of the fun for viewers is following up with other resources to learn more or add more colour to stories we think we already know. We may know the story of Kupe, but what about his wife? We might walk past a sculpture everyday, but what went into its creation?

Beyond the waterfront installations, pieces from 15 years of Reihana’s catalogue will be dotted across galleries in Pōneke. Pataka Gallery in Porirua is showing a mini-survey of her career, including the video work Nomads of the Sea which tells the story of Charlotte Badger, the first European woman who lived in Aotearoa. It’s the first time the piece has been shown in New Zealand.

Reihana has frequently explored how identity and history intersect with place and community in her artistic practice. The concepts for Kura Moana were developed from Reihana’s seminal 2015 video work In Pursuit of Venus, currently on display at Te Papa. The video, shown at the 2017 Venice Biennale, brings to life a historic French scenic wallpaper portraying encounters between Europeans and Tahitians – two peoples, brought together by the sea.

“Like In Pursuit of Venus, [in Kura Moana] there’s these interactions between people because of travellers who’ve hopped across the waterways and travelled to far flung places,” says Reihana.

The 2022 Aotearoa New Zealand Festival of the Arts is on now and runs until March 20.

The festival has relaunched a revised programme to focus on outdoor art, visuals arts and digital sessions showcasing chamber music and conversations with local and international writers. For more information visit festival.nz.