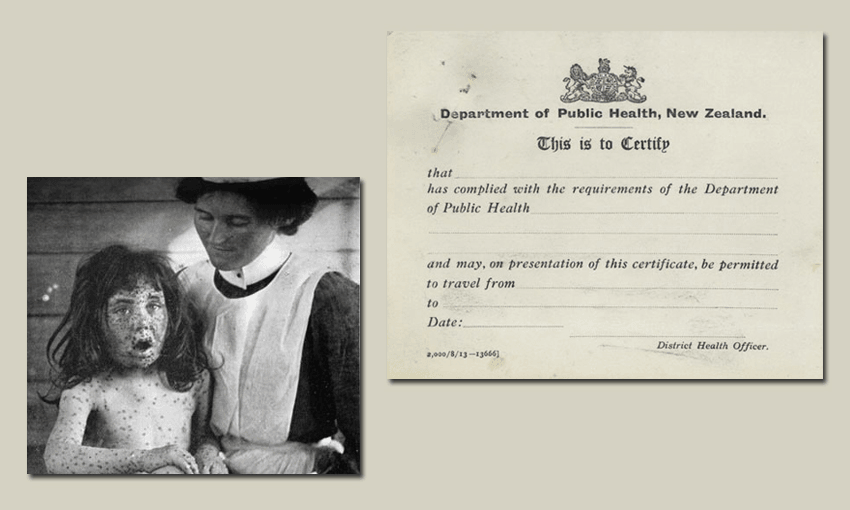 ‘Let them starve’: The lockdown of 1913 and its lessons for today

History warns that we should be wary of the misuse of power in the name of public health, writes Scott Hamilton.

In the winter of 1913 a group of Māori appeared in the office of Arthur Manning, the mayor of Hamilton. The visitors had tight faces and dirty clothes. They had walked into the city on mud roads, to avoid patrols by police and gangs of Pākehā vigilantes.

The visitors came from Whatawhata and Maungatautari, kāinga to the west and east of Hamilton. They wanted to ask the mayor for help. For weeks, their villages had been locked down by the state. After hearing that Waikato Māori were suffering from smallpox, public health officers had raised yellow flags, signifying infection and quarantine, outside their kāinga. Police and armed Pākehā civilians had blocked the roads and bridges that had connected them with the rest of New Zealand. Most of their clothes had been burnt, and their whare had been sprayed with formaldehyde, a chemical that killed infections but caused cancer.

Even though they had been vaccinated and showed no signs of smallpox, Mayor Manning’s visitors were forbidden from walking to Pākehā farms to work. They could not visit Pākehā shops to buy flour and sugar. Their children were sickening, but they could not reach a doctor. They were starving and cold and desperate.

Smallpox had been brought to New Zealand three months earlier by a Mormon missionary named Richard Shumway who had contracted the disease in Sydney and had diagnosed himself as suffering from measles. Shumway was the guest of honour at a hui for Māori Mormons; whānau came from around Te Ika a Māui to meet him, and went away infected.

Smallpox could spread through the air and through fluids. Sufferers sweated, sneezed, coughed, and watched hundreds of boils grow from their skin. The boils filled with pus and blood, then burst, leaving scabs and an incorrigible itch. If victims lived long enough their scabs flaked off, to reveal pitted scars.

Both local and central government dealt ruthlessly with Māori, as smallpox spread through Northland and into Auckland, the Waikato, and Hawke’s Bay. Rural communities were quarantined; Māori suffering in Auckland were removed to a primitive clinic at the potholed end of Point Chevalier Road. Health officers banned Māori from travelling as passengers on trains, coaches, and boats without certificates.

Mayor Manning was appalled by his Māori guests. He warned them that they had had no right to enter Hamilton, let alone his office. “You will be apprehended; you will be fined fifty pounds!” he shouted. The Māori delegation quickly left Manning’s city.

A few days later, at a meeting of Hamilton Borough Council, Manning described his unwelcome visitors. “It is a serious thing to have Māoris coming into your office,” the mayor complained. Manning warned that if Māori were allowed into Hamilton, they would bring smallpox with them.

The mayor moved a motion that the government take “more stringent measures” to control “movements of Māoris”. Several councillors spoke in support of his idea. John McKinnon, who had established a building business in Hamilton and was a popular member of several sports clubs, argued that “if we refuse to allow the Māoris to come into town under any pretext whatever, we are safe”. Councillor McKinnon was unconcerned by the problems of kāinga like Whatawhata and Maungatautari. “Let them starve,” he said. “It is not our funeral.” The mayor’s motion passed.

Māori were victims of the Public Health Act in 1913. This innocuous-sounding piece of legislation had been created in 1872, and rewritten several times since. The Public Health Act had been influenced by the 1869 Contagious Diseases Act, which was aimed at the colony’s sex workers whom politicians and newspapers blamed for outbreaks of venereal disease. The Act empowered police to detain any woman they suspected of prostitution. Detainees were taken to special facilities, where officials forcibly examined them with specula, in a procedure dubbed “steel rape”. If signs of venereal disease were found, the woman could be held without charge or trial for three months.

Both the Contagious Diseases Act and the Public Health Act were used against groups that mainstream society considered immoral and disease-ridden. During the smallpox epidemic of 1913, journalists and politicians argued that Māori deserved special attention from the state because of their lack of hygiene and their degenerate way of life. The Northern Advocate told its readers that kāinga were “breeding grounds for sickness” because “Māori people live in a state of the most degrading dirtiness”. The Dominion called smallpox a “Māori malady”. The New Zealand Herald insisted that “a community observing normal sanitary laws need be in no danger of an epidemic of smallpox”. Auckland mayor Christopher Parr insisted that “strict steps” were needed to “isolate” the unhygienic natives.

But a 1914 report by the national health officer, Joseph Frengley, was unable to link dirt and poverty to smallpox. Frengley found that “natives living in comfortable homes” suffered as much as those subsisting in shacks and huts. By the time Frengley’s report was published, the smallpox epidemic had been over for months. But restrictions on Māori had only been slowly lifted. It was only in April 1914, for example, that Māori were finally able to travel on trains without certificates.

For decades after 1913, the Public Health Act was sporadically used to lock down Māori. The act was aimed several times at the prophet and politician Wiremu Rātana. After the Holy Spirit spoke to him in 1918, Rātana began to travel New Zealand preaching a message of Māori self-empowerment. Crowds soon began to follow his convertible motor car. Rātana’s complaints about the neglect of Māori upset many powerful Pākehā, as well as more conservative Māori leaders like Apirana Ngata.

In 1925 Rātana announced he would hold an Easter hui for his many followers. The government of William Massey used the Public Health Act to ban the gathering on the grounds that it might spread disease. Rātana’s secretary Peter Moko noted that no Pākehā church had been barred from holding Easter services. Nor, Moko pointed out, were upcoming Anzac Day commemorations being curtailed anywhere in New Zealand.

Eight years later, when the conservative government of George Forbes was struggling to survive the Great Depression and the protests of the poor, Rātana tried to visit his followers in the far north of Te Ika a Māui. Health officers claimed that the prophet’s party of 50 might help to spread encephalitis. Together with local Pākehā supporters, the officers created a barricade by blocking the road north of Kaikohe with lorries. A standoff ensued, and police were summoned from Whangārei. Rātana’s group eventually turned south, joking that they had become New Zealand’s Kelly Gang.

Last week Jacinda Ardern announced the lockdown of New Zealand. The head of the coronavirus taskforce set up by Ardern is the police commissioner, Mike Bush. In his first statement after being appointed, Bush noted that the Health Act gave police wide powers to stop infectious disease. The Health Act was created in 1956, and is the descendant of the law that was used against Rātana and against the people of Whatawhata and Maungatautari.

The national shutdown is both prudent and popular. Most Kiwis know that serious measures are necessary, if the spread of a new and terrible sickness is to be stopped. But history suggests that we should be wary of the misuse of power in the name of public health. Our journalists and the members of the cross-party Covid-19 committee need to watch the state carefully, and to remember 1913.