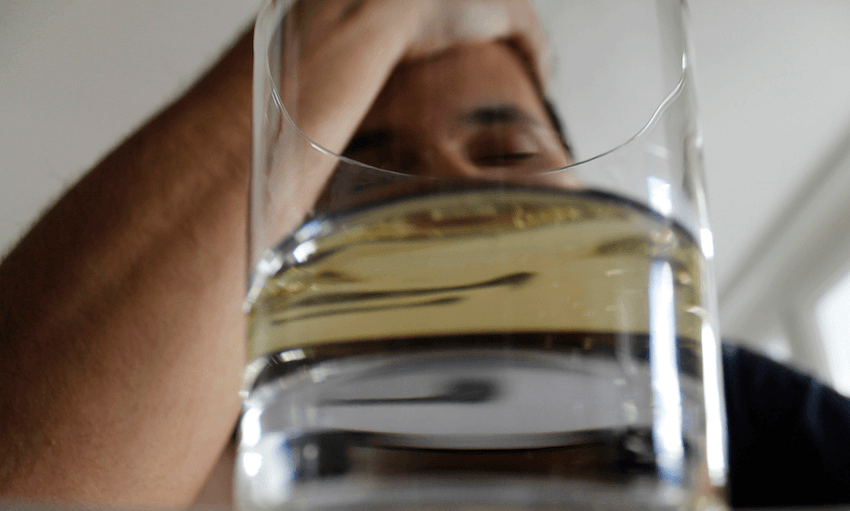 Here’s what will happen when you are a functional alcoholic

After almost 20 years with a drinking problem, newly sober Baal Caulfield* knows a thing or two about the lies you tell yourself as a ‘functional’ alcoholic.

Sweet sweet liquor, nectar of the gods. Bringer of joy the world over. Whether it’s a glass of your favourite Pinot with your wife over dinner or drinking four shots of gin through your ear (yeah…I did that once for reasons I’m still not sure about), alcohol is the world’s lubricant. And hey, we can handle it, right? We are never going to become that guy down at the mall who wets his pants and shouts inanities at long forgotten gods.

No, we’ll be functional and able to drink and maintain our careers, friends and family while spending the majority of the time drunk and happy.

Well guess what? Up until recently I was a functional alcoholic and after almost nearly 20 years I knew a few things about being “functional”

You are going to smell

No matter what you do, you’ll smell. And I don’t mean of just liquor, I mean you will smell in a variety of different ways. Alcohol smells, we all know this. Whisky smells of whisky, vodka smells of vodka, beer smells of beer. But underneath it all is that persistent chemical odour of alcohol. You can wash away the smell of the particular type of liquor you may have drunk, but the stench of alcohol will remain, no matter how many showers you take or how many times you roll yourself in a blend of aromatic herbs and spices. It creeps out of your pores over many hours and covers you in an unctuous film which hangs heavy around you. It attaches itself to your clothes, to your bed covers and to any loved ones who can stand to be hugged by your greasy drunken self. I have been in meetings where I was sure the smell of a crazed weekend was pouring from my bloodshot eyes. It is an insanely difficult smell to rid you and your house of which leads to…

That smell will turn heads and will get you noticed. No matter how hard you try to hide it, people will notice. And it isn’t just the smell – it’s everything about you. Frequently tired, bloodshot eyes and malodorous clothing are just the start – all that tells people is that you may have had a big weekend or night out. But then people will start to notice you are frequently tired and grumpy in the mornings but miraculously chipper after “lunch”, which might mean eating and having a beer – but also, as the alcoholism progresses, popping down to the supermarket, buying a bottle of wine and necking most of it unceremoniously in a public bathroom. Some mornings your hands will shake, your breath will be 80 proof and people will start saying things like “big night last night was it?” on a Wednesday morning. First they’ll say it with surprise (you were drinking on Tuesday night?), then with resignation (You were drinking on a Tuesday night…’protracted sigh’…). And because people are going to start noticing, get ready because…

You are going to lie. A lot.

We’ve all told our significant others that we ‘had a few’ when in actual fact we drank our body weight in alcohol, set ourselves on fire in a nightclub, then scaled a building to get through the bathroom window of drug dealer’s apartment to get our bag which we’d left in the lounge (yes, sadly that is one of the more tame situations I found myself in). But get ready to be more than just a little white liar; as a functional alcoholic you’ll wind up being a devious little shit…about EVERYTHING. How much you drank, where you have been, why you are missing your tie, what time of day it is, why you slept on the floor – you will lie about everything to avoid anyone questioning your drinking habits.

You’ll hide bottles around the house, you’ll have stashes in the garden, and the guy at the bottle shop will start eyeing you suspiciously when you return for your third bottle of wine that day, explaining you’re ‘having a party’ at 11am on a Monday morning. You’ll make excuses about the amount of money you are spending, you’ll call in sick to work, you’ll blabber to your partner about ‘being tired’ when your sexual organs stop working properly, your whole life will be a huge ball of lies and if you’re clever enough you’ll be able to maintain these lies for years however…

You’re going to get caught out

Sooner or later the lies on top of lies are going to collapse like a house of cards. Why are you slurring after one beer and ‘popping outside for a cigarette’? How come you stink of liquor when no one saw you drink anything and you claim to have been sober all day? Why are you behaving in such a strange manner all of a sudden? After months or years of being an alcoholic you will be caught and the gossamer fibres of bullshit you have hung around yourself will fall to pieces. Your significant other will be upset, your employer will be wary of you and your friends will start getting tired of you. Worst of all, the bullshit you have told yourself about being “functional” will collapse. It isn’t just those around you who fall for your crap but suddenly you catch yourself out – you weren’t just lying to others, you were lying to yourself.

Sooner or later you are going to screw everything up

I’m 37 years old. Not 50, not 60, and not 40. Thirty-seven years old. At 37 I have been arrested, written off cars, am divorced and have seriously compromised my health. I’ve been in hospital four times in the last 12 months with acute pancreatitis, a pain which is almost indescribable and only ebbs with a huge combination of morphine, fentanyl and ketamine. Yeah, sounds like fun right?

I am not Hunter S. Thompson and neither are you. Sooner or later it gets you in the end. You’ll lose relationships, money, the respect of your peers and your health. And I consider myself lucky despite all this, because it could be a hell of a lot worse. The one thing no one tells you is that you can’t be a functional alcoholic – because being an alcoholic is a dysfunctional state of affairs. Lying to your family, throwing away money, not remembering vast chunks of every weekend isn’t functioning. Sliming around the office after forgetting to shave for the fourth day running isn’t functional.

I ‘functioned’ for nearly 20 years as an alcoholic but in the end it all just falls apart.