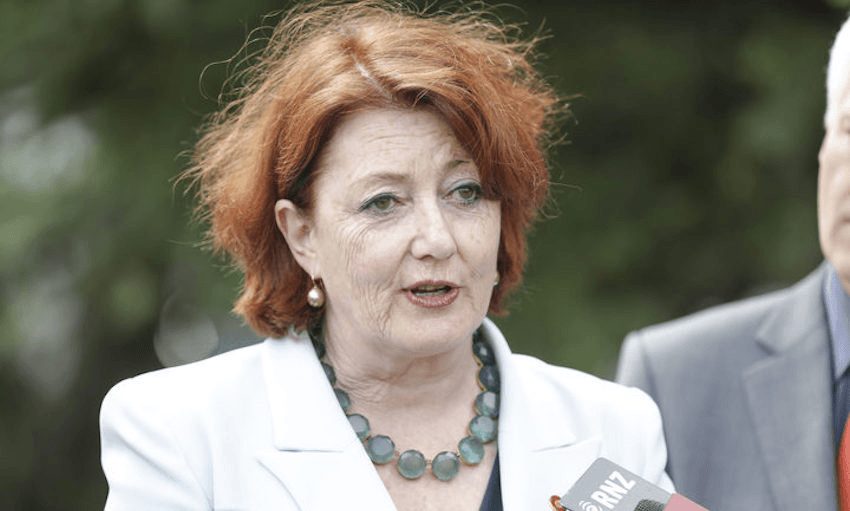 The North Shore MP’s aggressive opposition to the End of Life Choice Bill is proving such a turn off that it can only bolster the pro-euthanasia side, writes Graham Adams.

The North Shore MP is a fierce opponent of David Seymour’s End of Life Choice Bill and over the past few years has popped up in town hall debates all over the country to put her case.

At every opportunity, she has breathed fire at the proposal that parliament could allow some very sick people to get the chance to legally end their lives – at their own request – a few weeks or months earlier than their disease dictates.

Most people – including the very ill – want to live as long as they can but hope to skip the often painful and distressing bit at the very end. Or at least that’s what polls showing a persistent majority favouring assisted dying over two decades tell us.

Curiously, having lethal medication at hand can give those with a poor prognosis the confidence to live better and longer. As eminent Auckland University psychologist Glynn Owens pointed out at the trial of Suzie Austen in Wellington last year on charges of aiding a suicide, just possessing a life-ending drug can be palliative for the terminally ill because of the reassuring and soothing effects of knowing they can take it if their suffering intensifies.

As Professor Owens pointed out, one-third of all those in Oregon who receive prescriptions do not actually take the lethal medication.

It is well documented that having the chance to legally take such medication also means some of the terminally ill don’t feel the need to take their own lives even earlier while they are still capable. It is estimated that more than six per cent of terminally ill people succeed in killing themselves – mostly in lonely and violent ways – and many more try. An assisted dying bill would make that unnecessary for many.

Maggie Barry has made it clear this sort of evidence won’t sway her opposition one little bit, insisting that Seymour’s “disgraceful” bill is nothing more than a “licence to kill”.

In some ways, her aggressive approach to the topic makes her almost an asset to the pro-euthanasia camp inasmuch as she alienates many people who might be otherwise persuaded to agree with her.

However, it must be said the frequent claims she makes contrary to well-established evidence are a serious worry. On TVNZ’s Q&A this week she claimed that palliative care can help everyone die painlessly, which, as Seymour noted, was found to be untrue in Lecretia Seales’ high court case – not to mention the evidence provided by horrific deaths described in numerous submissions to the select committee inquiries. It’s as if the voluminous evidence about untreatable end-of-life suffering provided since Seales took her case in 2015 never happened.

Often belligerent, Barry talks over those with opposing views and uses such inflammatory language that sometimes even those against a law change feel ill-disposed towards her.

As David Speary wrote in the North Shore Times last September after attending a debate on assisted dying in Devonport: “[Maggie Barry] interrupted the [End of Life Choice] speaker and, when it was her time, completely dominated the rest of the meeting. The chairman could hardly give anybody else a chance.

“Maggie distorted statistics and overseas reports like they were ‘fake news’, and many people in the audience got upset at her references to killing people as if it would be indiscriminate elimination of the mentally ill, physically handicapped, or the old and useless.”

David Seymour, in particular, seems to be the tinder paper to her inner volcano. On Q&A, she looked ready to spontaneously combust at the very sight of him and quickly made the mild-mannered Act MP seem like a model of decency and decorum, which he invariably is when he’s not on the dance floor.

It’s hard not to wonder if Barry isn’t still smarting from the events of last December. A day when she was minding her own business in the corridors of parliament, journalists stopped her and asked what she thought of the news that Seymour – in response to public opposition – had suggested that his bill be restricted to the terminally ill, that the “grievous and irremediable” clause be dropped, and that the bill explicitly exclude eligibility on the grounds of mental health conditions and disabilities alone.

He also suggested that aspects of Barry’s own member’s bill to improve palliative care be incorporated into his End of Life Choice Bill.

Barry’s bluster at this thoroughly unexpected attempt at compromise was televised and the embarrassing spectacle made it painfully obvious that she knew she had had been gazumped. She was obviously blindsided by his recommendations and dismissed them out of hand as “an extraordinary flight of fancy”, “publicity seeking” and accused him of being “cute”.

She returned to the same theme on Q&A this week when Seymour again made his offer of tucking her own palliative care bill into his under the glare of television lights. She declared she “didn’t want a bar of it”.

She also reminded Seymour that he no longer had any direct influence over the bill he sponsored as it was now “the property of the [Justice select] committee”, of which she is deputy chair, and that the committee had been generous in allowing him to sit in on meetings to comment and consider submissions.

There was not the slightest hint of gratitude that her palliative care bill, currently lodged in parliament’s biscuit tin, would have a real chance of becoming law under his proposal if the House adopted it. Left in the tin, it may languish there for ever and never be drawn. In fact, Barry may well leave parliament without it having seen the light of day if she fails to adopt Seymour’s perfectly reasonable offer.

Many viewers will conclude after watching her TV performance that she is determined to crush Seymour’s bill no matter what it takes and no matter how many compromises he is willing to propose to meet his critics halfway. Even if he has no official power over the form his bill takes now – apart from his vote as an MP – he has a lot of moral authority as its sponsor and tireless advocate.

Barry is sitting on a substantial majority in her North Shore electorate but she is not doing the wider National Party any favours with her aggressive opposition. And some of her fellow National MPs aren’t best pleased either. Insiders say there is a lot of disappointment in National’s caucus at Barry’s behaviour and that has affected not just her own credibility but those who side with her as well.

There is a mood abroad for more kindness and civility in our politics – as well as a desire for more liberal social policies – but Barry seems to have missed that memo entirely.

Perhaps her colleagues should remind her that it is possible to oppose the End of Life Choice Bill graciously and logically and passionately without being plainly rude or making stuff up.

The Justice select committee is due to report back to Parliament on April 9.