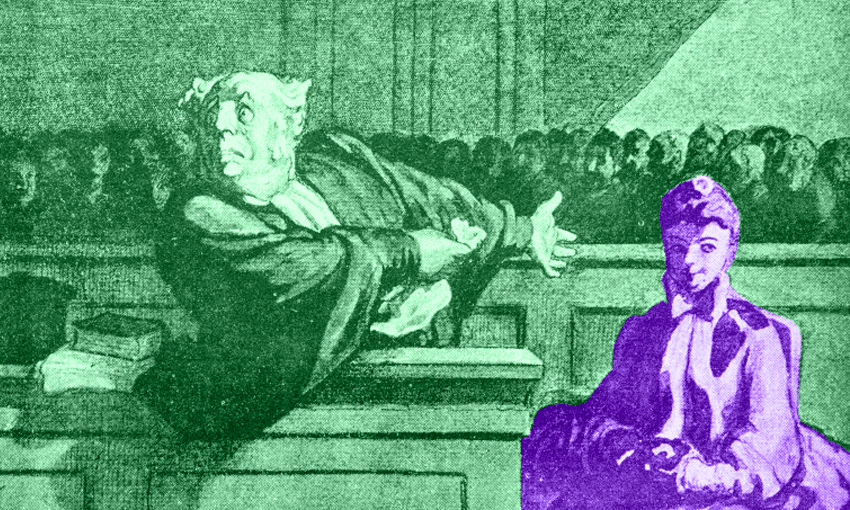 Over the past 18 months, as the sexual violence legislation bill has been making its way through Aotearoa’s parliamentary processes, heightened attention has been paid to the distressing experiences victims of sexual violence face when they give evidence in New Zealand courts.

Despite the attention the bill has received, little understanding of the historical roots of these experiences has been present within debates, with Jan Logie, parliamentary under-secretary to the minister of justice for domestic and sexual violence issues, arguing the need for the bill was first realised during the Louise Nicholas case in the early 1990s.

Women, however, were facing merciless defence tactics in New Zealand courtrooms almost as soon as British law was formally introduced after the signing of the Treaty of Waitangi in 1840.

If passed, the bill would disallow the sexual history of complainants to be addressed by the defence. It is an effort to discontinue the all-too-frequent occurrence of the irrelevant invasion of privacy victims are subjected to through heavy-handed defence tactics.

These issues were highlighted starkly in November 2019 when then 26-year-old Jesse Shane Kempson appeared in the Auckland High Court for the murder of British backpacker Grace Millane. Kempson’s defence team argued Millane’s death was a consensual sexual encounter gone wrong. Millane’s past sexual history was used as evidence to bolster a defence characterised by Scott Beard, lead detective on the case, as a method of “repetitively revictimis[ing] the victim and the victim’s family”.

Millane was not alive to face Kempson or his defence team in court. For the victims of sexual violence who do enter the courtroom, however, former minister of justice Andrew Little has said giving evidence and facing these tactics is “the single most difficult thing about a trial”. As witnesses, victims face being cross-examined with repeated pointless questions and their sexual history, reputation and credibility being attacked.

Logie has said the bill would allow sexual violence cases “to be tried on facts and the evidence rather than myths and stereotypes or the ability of the defence to beat down and confuse a complaint to the point where they are unable to hold themselves through that process”.

It is a process that dates back to before New Zealand was colonised and a colonial court system was established.

In the early 19th century, British courts came to define rape as a violent crime. Cases coming before the courts were rare and prosecution even rarer. Until 1841, a mandatory death sentence was carried out if a defendant was found guilty of rape. In theory, this meant British jurisprudence viewed rape as one of the gravest crimes a person could commit, while in practice the harshness of the sentence led courts to be overly cautious about prosecuting. The gravity of the punishment also caused defence counsels to become aggressive in their questioning of the victim’s story and credibility.

Attitudes towards evidence in rape cases had also been significantly altered by the writings of 17th-century jurist Sir Matthew Hale. The “Hale warning”, which it came to be known as, was spoken in courtrooms internationally as late as the 1980s and included the line that rape “is an accusation easily to be made, hard to be proved, and harder yet to be defended by the party accused, tho’ never so innocent”.

Hale emphasised the need for physical proof on the woman’s body that a violation had taken place, as well as interrogation of her past sexual history, creating a culture where women on the witness stand were put on trial as much as the defendant themselves. The rise of medical evidence in 19th-century rape cases to prove lack of consent and evidence of violence became central to a victim succeeding in their pursuit of justice.

By the time the court system was set up in colonial New Zealand, defence counsels had become talented actors in cross-examining witnesses skilfully and callously in an attempt to attack their credibility and sway the all-male jury towards acquittal. Hale’s philosophies of evidence were also by this time deeply embedded in the British and colonial court culture.

In 1862, a woman named Mary took the stand in the Dunedin Supreme Court in a case of rape against two men. Mary was subjected to relentless cross-examination by the defence counsel. Her recent marriage was questioned. It was suggested the nuptials had taken place in order for her to appear more credible, as Mary and her husband had taken the opportunity to get married when she was called to Dunedin to give evidence in the case.

The defence also questioned Mary’s presence on the Otago goldfields, where in the 1860s single immigrant women were regarded as susceptible to prostitution and causing the spread of venereal disease and other immoral behaviour.

Married Pākehā female victims of good repute were most likely to succeed in the courts in cases of sexual violence, but their experience on the witness stand was often no different to that of single female witnesses. The justice system in colonial New Zealand most often failed Māori women who were victims of sexual violence, unless they were the wives of respectable Pākehā settlers.

In the case of Mary, a doctor testified that she had experienced extreme violence. Although there were instances of women’s testimony being believed unaccompanied by medical testimony, they were rare and often required performative displays of distress and emotion. The focus on physical evidence redirected the courts’ attention away from the narrative of the witness. Instead her body and not her words were examined by a male doctor and the courts to establish truth.

After the Offences Against the Person Act 1861, the emission of semen was no longer required in order to prove rape, but resistance to the attack still was. The authority given to the white, male medical voice, coupled with the use of Hale’s attention to physical evidence and heavy-handed defence tactics, saw a New Zealand court culture perpetuated where a hierarchy of reliability surrounding sexual violence was accepted and the voice of the victim sat at the bottom.

If this all sounds eerily familiar, you’d be right. The stories of women’s experiences in New Zealand’s courts brought to the surface of public attention lately tell a similar story to that of women a hundred years ago. It is, frankly, disturbing how little has changed.

The sexual violence legislation bill will hopefully mark an end in New Zealand to the remaining traces of Sir Matthew Hale’s philosophies of evidence and the culture of distrust of victims in courts. It is hoped alternative ways of giving evidence will become more widely accepted. The bill would also give judges confidence to intervene when inappropriate questioning occurred without fearing it would result in a mistrial.

One of the challenges of the bill is making sure the defendant still receives a fair trial, of which cross-examination is considered a fundamental tool. With that priority in mind, if alternative forms of evidence or lack of questioning hinder this in any way it can be challenged by the defence and the judge must rule on how to proceed.

But as Little has argued, there is no way the subject of sexual history and reputation will ever be relevant if sexual offending has occurred.