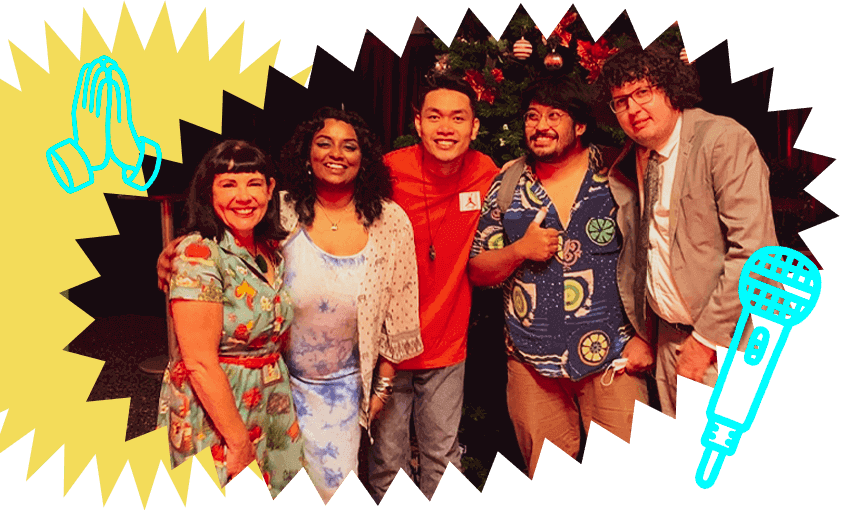 There’s a bit right at the top of the show before I start talking when I look out at the roomful of faces and think: Look at you, you beautiful humans all gathered together in one place for the first time in 107 days, aren’t you fucking awesome for coming out and being with each other. And so that’s exactly what I say to them, and you can tell they feel pretty good about it, too, and it feels like we all deserve a round of applause for getting this far, so we do that, and then I remember how to do comedy and start the show.

It’s Friday, day one of the traffic light system – red in Tāmaki Makaurau – and the Tuning Fork is the first venue to open up with live comedy. The Classic, our full-time comedy club, will open a day later to equally enthusiastic comedians and punters. It’s one of the great things about comedy as opposed to theatre, dance or music – you can get it up fast. No rehearsals, no lines to learn or sets to build or bands to get back together. Just lights and a PA, and enough time to get the tickets sold.

This show went on sale last Monday and the room is just over half-filled to its socially distanced capacity of one hundred. Interestingly, next Friday’s gig sold out first – an indication maybe of a little hesitancy about live gigs, or that the thing people most wanted to do immediately was catch up with friends rather than watch a show. The people in the room are mostly in pairs, mostly in their 20s and 30s. There’s an unusually small (though still enthusiastic) response when I ask the menopausal women in the room to make some noise.

They’ve all come masked, vaccine passes ready, and are served by bar staff at their tables. The only person who buggers this up is me when towards the end of the night I go looking for my first wine and don’t know how the system works, and get asked very politely to step away from the bar area. I feel like a dick, like I’ve gone to someone’s house and noticed halfway through dinner that I’m the only person who’s got their shoes on. Despite being an idiot, I am allowed a wine.

She’s a helluva line-up – Natalie Samy, Ray O’Leary, Donna Brookbanks, David Correos and James Roque (and me). We’ve been messaging each other all week – dying to get back to work, and also sick with nerves. The more gigs you do, the better you are which means we’re all sure we’ll be quite shit by now. I spend the whole day waiting for the show, distracting myself occasionally with vital chores like cleaning out my handbag. I listen to an audio recording of a gig to see if I can remember how my jokes go.

We all arrive stupid early. In the green room it is collectively agreed we are allowed to take our masks off and also to hug each other and it is delightful. We swap work stories – Correos and Roque have both just shot episodes of Give Us A Clue. David says it’s his favourite ever TV experience and Ray cannot believe he is ranking it above Taskmaster NZ but David insists he is. Which is what comedians do, really – say something that feels right at the time, then defend it to the death, but also change our minds later if we want.

There’s been online community chatter all week about how much we should talk about lockdowns and Covid and vaccinations, and there are two schools of thought. One is that people are sick of it all – bored with the subject, tired of the divisions, looking for distraction. The other is that are you fucking mental, of course we have to talk about what our lives have been like since August and who doesn’t want to hear about how we got through. Plus pre-lockdown stories that start, “So I was in Hamilton,” won’t fly because no you weren’t, the border is closed.

We talk about this and decide, you know what? Let’s tell the stories we most want to tell and do what makes us happy because that kind of attitude is catchy and it’ll make the audience happy, too.

I have new stories about turning into a 1950s housewife and DIY personal grooming which get sandwiched between the other bits I remember about climate change and the pay gap, and I am particularly pleased at the way they laugh at my joke about anti-vaxxers at the top of the show because, oof, those people have made it easy for me to access my rage over past months and turning that anger into a gag is what I live for.

After so long away, it’s possible some punters have forgotten the difference between a show and a Facebook thread. While Natalie is on stage, a woman comes over to our table and says, “You’re very funny, but…” and every comedian knows how this is going to go. “You’re very funny, but you need to let people make their own decisions.” And I have a million things to say about individual rights versus collectively responsibility in a global pandemic, and that my job is to express my sincerely held opinions and other comedians will express theirs, and that also the gag had worked a treat. But what I actually say is, “Go and sit down” in my best Mother Voice while pointing at her table, and she does.

Every comedian flies, and all of us are buzzing afterwards. We talk about how we’ve missed this version of ourselves – who each of us is, but dialled right up to be at our sharpest and shiniest. I stay up later than I have since August and, in the morning, when I look at the photos I took of the audience from the stage at the end, I get a bit weepy. I can even see the lady who had been mad at me at the start. She is grinning back at me now, waving her hands in the air.

That problem we’ve had lately with social cohesion? Now that we can be in a room together, I think we might be OK.