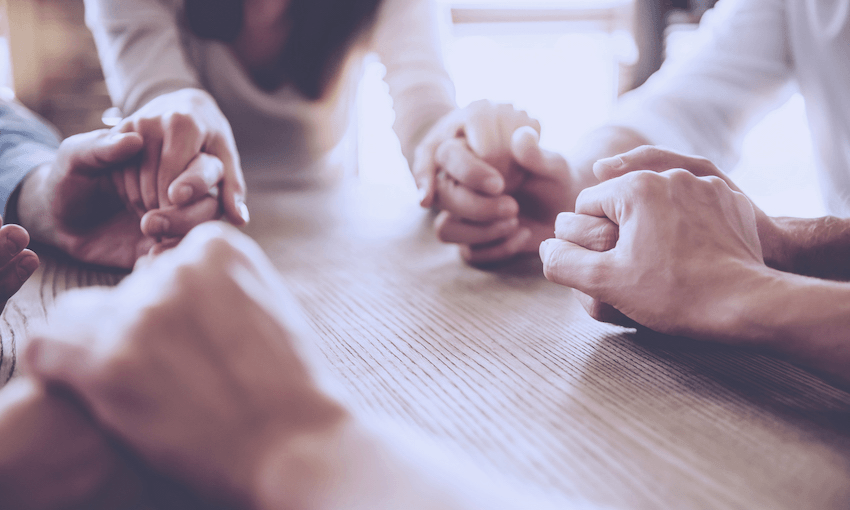 While the ban on conversion therapy is delayed, queer people are being tortured

Our politicians love a PR opportunity to talk about their support for the queer community, but when the time comes to act, they hesitate again and again, writes Shaneel Lal.

When I wake up every morning, I don’t look in the mirror and say, “oops, I’m trans, better fix that”. But in the summer of 2017, I was volunteering at Middlemore Hospital when a priest walked up to me and offered to “pray my gay away”. I refused. So he looked at me, and he said “it’s hot, but you know what’s hotter? Hell.”

Thirty-five years ago, homosexuality was a crime. Eight years ago, same-sex marriage wasn’t a reality. And to this day, it is entirely legal to torture queer people to change their sexuality or gender in the name of conversion therapy.

Joan Bellingham grew up wanting to be a nurse, but when the word got out that she was a lesbian, she was taken to the Princess Margaret Hospital, not as a nurse but as a patient. Joan was falsely diagnosed with a “neurotic personality disorder” and tormented with over 200 electric shocks. Joan said the headaches made her want to die and the shocks felt like razor blades going through her body. She’s 69 years old now, still a lesbian, but she says she ended up hating herself.

People are who they are; conversion therapy is a prejudiced attempt at bottling up parts of people society refuses to accept. Conversion therapy makes a gay person straight like saying talofa makes Judith Collins Samoan.

Many have turned to psychoanalysis. An undercover TVNZ Sunday investigation found one medical professional, Natasha Ellis, saying same-sex “attraction can absolutely be changed”.

“Jay” went undercover as a young Christian gay man and was referred to Ellis through Living Wisdom, a Nelson-based pseudoscientific religious counselling service, by David Riddell. Ellis gave Jay a set of sayings that would help rewire his brain. Ellis told Jay to memorise the phrases, text them to himself twice a day and read them every morning and night.

Some use aversion therapy, which includes snapping oneself with a rubber band, having an ice-cold shower or inflicting pain on yourself every time you feel or think “queerly”. The goal is to make any queer thoughts or feelings aversive by associating them with pain and suffering, so accepting your queerness becomes a punishment.

The most significant practitioners of conversion therapy are religious extremists. There are numerous stories of young people praying to God to “heal them or kill them”, after being told by their church to pray for forgiveness.

There is a fine line between religious freedom and religious bigotry. Conversion therapy is the latter. Religious leaders have weaponised the relationship queer people have with God and manipulated them into thinking God will hate them if they don’t change. This bullying clothed in “love” is an insidious abuse of trust and power. God doesn’t care if you are gay or trans; being a decent human will suffice. As for these religious leaders, they have driven many queer people into a life of pain, misery and death, and God will never forgive them for it.

Recently, more than 370 religious leaders from around the world joined the call for a ban on conversion therapy. Conversion therapy is not about praying the gay away; it’s about physically and psychologically torturing queer people to death. In every democratic society, the rights and freedoms of people are balanced. Section 5 of the New Zealand Bill of Rights allows justifiable limitations on the rights promised in it. The severe harm avoided by banning conversion therapy provides a more than justifiable reason.

The Conversion Therapy Action Group seeks to ban all forms of conversion therapy for all people. Can adults consent to conversion therapy? The lines of consent are fully erased. No one is waking up on a random Sunday morning and choosing to pray the gay away. It takes years of conditioning before someone prefers abuse over queerness.

People aren’t able to give informed consent to conversion therapy. No one contemplating conversion therapy is told that there’s no evidence it’ll work, and that it will increase depression and the risk of suicide. Instead, they are lied to and told their gender and sexuality can be changed. If left legal for adults, vulnerable people will see some validity to it, only to be left damaged for life.

The basis of conversion therapy is that there is something wrong with being gay or trans. This does not become acceptable after someone is older than 18. Vulnerable adults who may want to engage in conversion therapy are a product of a queerphobic society and have been conditioned to believe there is something wrong with them. Coercion is present socially and mentally, which breaches the fundamental principles of consent. Instead of misleading people into torture, we should invest in affirming people’s gender and sexuality.

Two petitions with over 20,000 signatures were submitted to parliament in 2018. All prominent medical bodies in Aotearoa have opposed the practice. Marja Lubeck wrote a member’s bill that’s ready to go with a few changes.

The Labour Party campaigned on banning conversion therapy. They need 61 votes to do so, and the Green and Māori parties have said they will support a ban – which is 77 votes. What’s more, TVNZ’s vote compass tool found that 72% of New Zealanders want to see conversion therapy banned immediately.

We have done everything!

The only thing standing between conversion therapy and a ban is the Labour Party’s unwillingness to do so. If Labour wanted, they could start the process today. But the prime minister, Jacinda Ardern, wants to see the bill in parliament by the end of 2021.

The National Party and Judith Collins’ “no position” on conversion therapy is a position. They have chosen to remain complicit in the torture of queer people.* The Act Party will vote against banning conversion therapy.

Our politicians invariably love a PR opportunity to talk about their unconditional support for the queer community at the Big Gay Out. Yet, when asked to act on their words, time and time again, they hide behind painful hesitation.

It is difficult to say how many people conversion therapy has killed, but I know many that could’ve added to the stats. While the Labour Party delays the ban, the torture of queer people will continue. It is 2021, and it is still legal to erase queer identities. End conversion therapy in Aotearoa.

*On the afternoon of February 9, after this article was published, Judith Collins reportedly indicated that National would support a ban on conversion therapy

Shaneel Lal is the co-founder of the Conversion Therapy Action Group, a group working to end conversion therapy in Aotearoa New Zealand. Contact @shaneellall or @endconversiontherapynz