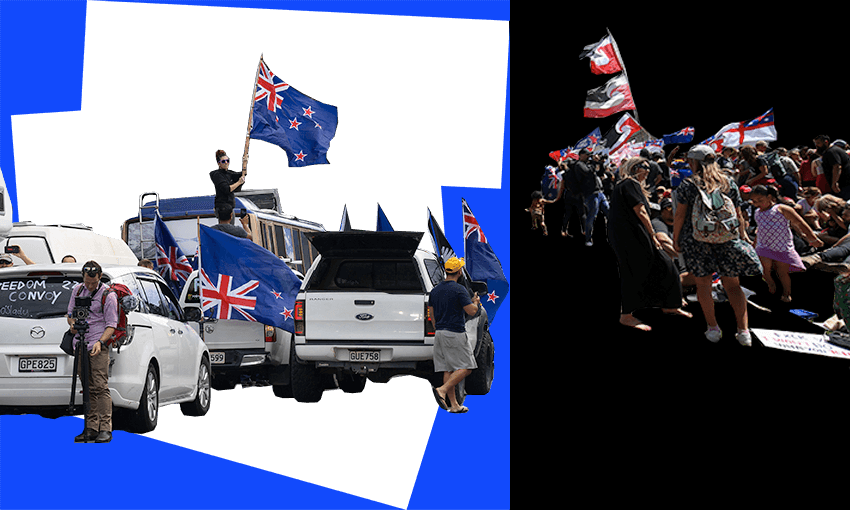 An angry rift has emerged amid the Convoy 2022 protest over messages and speakers at the gathering at parliament.

Dozens of tents and upside down flags remained pitched across the lawns of parliament grounds in Wellington this morning, and it wasn’t long before the groups of protesters got back to the business at hand: denouncing mandates, condemning vaccines and demanding the execution of politicians and media. But all is not well at the mill. Signs of a schism within the wider movement are emerging, with supporters of the convoy that saw hundreds of vehicles travel from different parts of the country to finish up in the capital yesterday accusing the Freedom and Rights Coalition (TFRC) of co-opting the event, encouraging demonstrators to vacate and even working as state assets. The quarrel hints at deeper fissures within the movement, whose participants range from those simply opposed to the vaccine requirements to fully blown QAnon-supporting conspiracists awash in bizarre disinformation.

Rival protest leaders and participants have clashed over the convoy’s approach, the messages shared through the loudspeaker, even the use of the colour red on the Convoy 2022 promotional material. There have been claims and counterclaims of rumours, spin, and “blatant smear campaigns”. “We had such a beautiful convoy,” said one protester on a livestream from parliament this morning, “and then it all turned to shit when we got to Wellington.”

Tempers flared after a speaker yesterday afternoon from the Freedom and Rights Coalition addressed the crowd. He suggested that participants should adhere to social distancing rules and remove vehicles obstructing the grounds, and suggested they would regroup tomorrow. That was interpreted as an encouragement to quit. “The TFRC hijacked the event. Pure and simple,” wrote one protester on the social channel Telegram. “The team has done great things in the past, no argument there, but the Convoy organisers etc should have been running the mikes as the message from TFRC was not in alignment with the Convoy.” It delivered a “clusterfuck end to a brilliant convoy,” said another.

Some retorted that the TFRC speaker was simply urging people to move vehicles that were blocking people’s commutes home. But others detected something more sinister. “It sounds like they’re pulling more strings than people realise and they also have government connections,” said one supporter. There were “double agents among us”, sensed another. One protester wrote on Facebook: “RETURN TO THE GROUNDS NOW! The dissipation was an intentional sabotage..! HOLD THE LINE DO NOT LEAVE!” Another suggested storming the PA.

The Freedom and Rights Coalition, founded last year by Brian Tamaki and the Destiny Church, has run numerous anti-mandate protests, including the events at the Auckland Domain that led to Tamaki’s arrest, the march on parliament on November 9 and the “Great Gridlock” events. Convoy 2022, organised by Derek Broomhall of Invercargill, is modelled on the Canadian truckers’ protest that has led to a state of emergency being declared in the capital, Ottawa.

Early yesterday evening TFRC attempted to quash the acrimony by posting a message on Facebook. “Let’s put the record straight about today!” it declared. “Today there has been a blatant smear campaign undertaken against The Freedoms and Rights Coalition, led largely by Counterspin Media, around what occurred at the CONVOY 2022 gathering at Parliament grounds.” Counterspin NZ is a conspiracy-theory-propagating online channel, backed by Steve Bannon’s US media operation.

The TFRC supports Convoy 2022, the post added, but “The team at TFRC HQ had no awareness of what was occurring on the ground today until a lot of people wrongly started throwing accusations our way … None of the speakers who spoke at parliament today are from TFRC, or were organised by TFRC.”

The criticisms, it suggested, betrayed a hint of prejudice. “Just because the speakers were Māori or spoke about God-stuff, this should in no way imply that they are from TFRC. To jump to these ill-informed conclusions is incredibly poor taste. TFRC has a track record of not allowing speakers to preach at our crowds – that is not what the public are coming for at freedom rallies, and we’ve always respected that people have many different beliefs within the freedom community.”

The TFRC in fact had come to the aid of an underprepared operation which was “desperate for last-minute support”. Local members had “quickly rallied and behind the scenes, they assisted them by providing a sound system, some security personnel, and also some food for those who had travelled”.

A coalition member had taken on the role of MC because he “was asked at the very last minute when he arrived at the grounds to step in by the Convoy 2022 organisers, as they were desperate for help. He did not promote TFRC out of respect for the organisers.” Convoy organisers had “asked the MC to communicate the request for vehicles to be removed from the grounds otherwise the police were going to take action. This call was not made by the MC or TFRC. The Convoy 2022 organisers have expressed their gratitude to TFRC for saving the day.”

Counterspin had failed to validate any “rumours or spin” before launching “a tirade, or smear campaign, online”, said the TFRC writer. “Despite all that has occurred the relationship between the Convoy 2022 organisers and TFRC remains healthy and strong … Ee continue to strive for unity amongst the freedom community. To all those who have been hating on us….we still love you too!

While that settled some nerves, it didn’t halt all the hostility. At the time of writing, the top-ranking comment on the Facebook post begins: “You tried to take over. It was obvious that you guys are working for the government for your own gain. Shame on you. You showed your true colors today and didn’t do yourselves any favours. Counterspin Media did not run a smear campaign against you. All they did was report what you were doing. You smeared yourself due to your arrogance and sense of self importance.” One protester this morning lamented that a “witch hunt” was under way on the Zello channel being used by protesters.

The anchor on Counterspin Media this morning said, “We weren’t trying to run a smear campaign against anybody yesterday we were just trying to report honestly about what happened”, lamenting that people had become “divided over religion”. She welcomed the reappearance of TFRC speakers today. “What they’re saying today is much stronger than what they were saying yesterday, so I take my hat off to them,” she said on the livestream. “Nobody’s promoting masks, nobody is promoting social distancing, nobody is promoting scanning in … It’s a true stand for freedom.”

In a message this morning on the Convoy channel of the “walkie-talkie” app Zello, an organiser explained that “people pulling in different directions” had prompted organisers to “lock down” the event’s Facebook, Telegram and Zello channels by withdrawing most existing admin rights, which would be restored once they were “100% sure everyone is pulling in the same direction”.

Disquiet from some parts of the movement were surfacing even before the convoy set off. In an impassioned letter to organisers, one prominent anti-mandate advocate and supporter of the QAnon conspiracy theory raised “sovereign citizen” derived concerns about many of the practical and strategic approaches, as well as warning against the encouragement to fly New Zealand flags. “It’s not patriotic to wave that flag,” he urged. “It’s akin to waving a white flag that states; ‘I’m a Corporate slave, that doesn’t understand contract law and wants to inherit billions of debt’. Don’t be that person …” His other concerns included Convoy 2022 publishing its code of conduct “on a background of red, representative of the party that is generally the rule maker of the two parts of the Corporation” and had also launched an investigation into the organiser (“we are having people look into his background as a few red flags have been sighted”).

It sparked on Telegram long comment threads full of what one participant summed up as “sick bickering”.

Yesterday afternoon a letter was distributed to protesters from the office of the Speaker of the House, Trevor Mallard. It provided a “reminder” of many of the activities that are in breach of rules for parliamentary grounds, including protesting after dark, pitching tents, and drinking alcohol or smoking, but was not a formal trespass notice.

One anti-vaccine activist with thousands of online followers posted the letter online denouncing its “fraudulent claims”, writing: “Are we to assume that the speaker is Trevor Mallard? If so, we rebut your claim that you occupy these grounds. No one has seen or heard you on these grounds, clearly the convoy has occupied these grounds.” There was one qualification: “However, if you present yourself in a gimp/bike leotard we might consider your occupation claim.”

This morning, proceedings resumed with a speaker calling for unity, for “dignity and peace”, and urging participants to be careful in their choice of words. Speaking from the steps of parliament he said: “Let’s show them we can do it with love.” That exhortation contrasted with a message scrawled in chalk alongside a line of police officers: “Hang ’em high.”