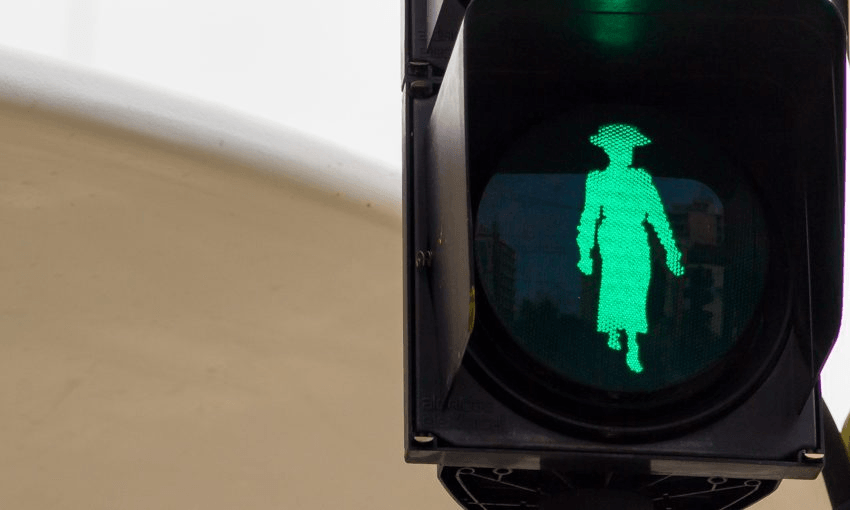 Women walk more, drive less, cycle less and use public transport more than men, on average – so why aren’t we designing urban spaces with that in mind, asks former Wellington mayor Celia Wade-Brown.

We love to skite about New Zealand women getting the vote first without looking closely at the numbers that followed. We’ve had three female prime ministers out of 40, and three female governors general out of 31. When I stood as mayor for Wellington, I became the third woman out of 34. When it comes to transport, only two of 27 ministers of transport have been female: Annette King and Jenny Shipley.

This is a big part of the reason that walking women in New Zealand cities have been almost completely erased.

It took from 2009 – when Wellington mayor Kerry Prendergast and prime minister John Key launched a booklet about democracy in the capital that casually mentioned having a green woman on a traffic light – until 2014 to actually get Kate Sheppard herself depicted on a pedestrian signal. Apocryphally, some engineer had said if they made the green one female, how would men know when to cross?

I suggested we wanted more varied figures, arguing for Carmen Rupe in her natural habitat of Cuba Street. Mayor Justin Lester has continued the trend for diversity: Wellington welcomed Te Matatini with kapa kaka figure pedestrian traffic lights. Pedestrian traffic lights might seem like a relatively small item in the scheme of transport activity, but the battles we’ve had to get them, including both Justin and myself having to directly contact NZTA CEOs, illustrate an entrenched sexism.

Does it matter? Is transport gender-neutral? Yes and no. Traffic signals tell a story – because of the Cuba Street lights, on Suffrage Day 2018 a transgender woman, Amanduh La, spoke of feeling far more empowered to share Carmen Rupe’s story to diverse groups of pedestrians as part of a Living Streets Aotearoa walking celebration of women’s history in the capital.

Challenging language and symbols challenges a narrow, linear and simplistic view of transport, especially when there are radically different transport patterns between men and women. On average, women make fewer journeys just for work, especially work trips away, and have more appointments and accompaniments. Because of this, their journey is likely to be less linear.

In 1999, officials in Vienna, Austria, asked residents of the city’s ninth district how often and why they used public transportation. “Most of the men filled out the questionnaire in less than five minutes,” said Ursula Bauer, one of the city administrators tasked with carrying out the survey. “But the women couldn’t stop writing.”

The majority of men reported using either a car or public transit twice a day: to go to paid work in the morning and come home at night. Women, on the other hand, used the city’s networks of sidewalks, bus routes, subway lines and streetcars more frequently and for a myriad of reasons.

“The women had a much more varied pattern of movement,” Bauer recalls. “They were writing things like, ‘I take my kids to the doctor some mornings, then bring them to school before I go to work. Later, I help my mother buy groceries and bring my kids home on the metro.'”

Women used public transit more often and made more trips on foot than men. They were also more likely to split their time between work and family commitments like taking care of children and elderly parents. Recognising this, city planners drafted a plan to improve pedestrian mobility and access to public transit, including additional lighting and widening sidewalks on narrow streets.

Women walk more, drive less, cycle less and use public transport more than men, on average, but that’s not the only difference – women are more concerned about personal safety. If we want more women to walk, lighting and passive surveillance are even more important. That’s true for minority groups such as gender diverse people and people of colour too. One in four people have a disability and, of this quarter of the population, over half have more than one.

While this article is primarily about women’s invisibility, other groups are equally forgotten. If we focus on peak-hour congestion alone so some imagined person can get home to watch TV five minutes earlier, we will ignore people’s real-world needs.

So if women are relatively invisible in transport, what about walking? Despite “active travel” being the phrase on the government’s collective lips, cycling is used for almost every example. The new government policy statement on transport includes a big boost to the ‘walking and cycling’ category, but all the new projects are shared paths which aren’t ideal for people on foot, with canes or wheelchairs.

There’s a lot of money to be made selling wheels and the infrastructure to put them on. Whether it’s electric cars, e-bikes, e-scooters, mountain bikes or drone delivery vehicles, I want them OFF the footpath. I want to talk about travelling, sauntering and sitting without wheels, with the honourable exception of people using wheelchairs and pushchairs, pulling wheeled suitcases or small children using small-wheeled bikes supervised by a walking adult. I fully support good infrastructure for cycling and e-scooters. Just not on our footpaths. Footpaths for feet!

The only answer to reduce fear and resultant social isolation among the elderly and vision-impaired is to implement good separate infrastructure that suits cycling and e-scootering at 20 – 30 kph – not reducing vehicles to a nominal and unenforced 5kph on every footpath. If an area has an effective 30kph speed limit then the “third way” or the “rora iti” may not be necessary.

If we continue to focus on peak-hour congestion alone so that some imaginary person can get home to watch TV five minutes earlier, we will ignore people’s real world needs. And if more city, transport and urban design decision-makers, technical staff and consultation images looked like the people walking the streets; our cities and towns would be far more walkable, safe and prosperous.