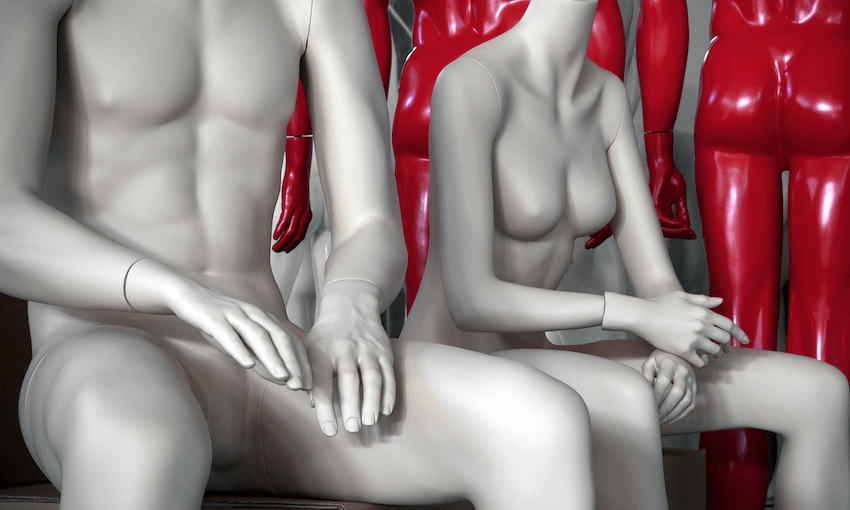 Stripping for Monet: What it’s like to be a nude model

Caroline Moratti goes all the way undercover to discover the truth about nude modelling for artists and photographers, in this story first published in Critic Te Arohi, the University of Otago student magazine.

Like any woman, it’s fair to say I have a complicated relationship with my body. By complicated, I mean a lifelong obsession and torment, and by relationship, I mean the kind where you get left on ‘seen’ by your Tinder date and still tell your friends that it was a ‘thing’. My upper arms and I are on a trial separation. My thighs and I barely speak except for civilities. My stomach? She can fuck right off. She knows what she did to me. So, I guess it’s fair to say that nude modelling was definitely never something on the radar for me. Not even remotely. To be honest with you, I would just love to be able to try on clothes in a dressing room without questioning my very existence on this planet. I’m a big fan of baby steps.

Baby steps of self acceptance are great and all, but when it’s been 21 years (and counting!) of continual self-hatred then sometimes, much like your father on Christmas, you’ve gotta question whether or not it’s gonna come at all. So, one evening, after seeing a Facebook call for nude models, and after an extremely questionable amount of wine, I sent off an email enquiry. Sexy, I know. The reply came the next day: they wanted me! They paid in cash! The Lord has small mercies.

Nude modelling has long been one of those things shrouded in mystery in the art world. Is it sexy? Is it cool? Is it fun? Or is it just mind-blowingly embarrassing and unattractive? I spoke to a range of people, including both those who take their clothes off and those who draw the resulting nakedness, to find out.

Tom was a nude model for life drawing classes for a couple of years. He admits that “it wasn’t something I had a burning desire to do”, but saw an ad for the gig and decided it was a challenge worth trying. “I wanted to gain some body confidence, and thought it would be a good way to tackle anxieties.” Twice a semester, Tom would turn up in the Evison Lounge at Otago University and be confronted with roughly 10-12 students and an instructor. With everyone sitting in a semicircle and the model on a small cube mat, for the next two hours Tom would pose in a variety of positions, from 5 to 20 minutes at a time. He says posing was “surprisingly hard” – he obviously hasn’t done yoga before (to be fair, neither have I).

When you’re getting your junk out in a room full of people, your first thought is ‘Will I know anyone’? It’s the same thought process you undergo when you walk to uni in your pyjamas. Turns out, life models get sent a list of names of everyone who has signed up to the course beforehand. Being Dunedin, this definitely came in handy. Tom admitted that “there’s been instances where I’ve had co-workers and colleagues in attendance, also ex-partners, so it’s nice to send them a message beforehand just giving them a warning”.

One time, Tom went on a blind date with someone who turned out to be a student in his class, but shockingly didn’t recognise him with clothes on. He also said, “an American exchange student did come up to me after class and say ‘I’ve never seen somebody with foreskin before’ which was kind of nice just to break that tension”. You heard it here first: foreskin talk is the new flirting.

Overall, Tom has some real appreciation for the gig, explaining that “at the end you get to see everyone’s art, and it’s awesome from a model’s perspective because you have this idea of what you look like and see in the mirror. You may focus on your flaws, but when you see yourself drawn by another person and they just draw what they see, they literally turn you into an artwork. It’s quite grounding.”

Sophia did nude modelling through the medium of photography. After getting outrageously drunk with a photographer friend one night, she mentioned it was something she had always wanted to try but hadn’t before because “you can’t really ask someone like ‘hey could you take pictures of my boobs’ because they’re probably going to be like ‘no’ and I hate rejection”. There wasn’t rejection though, with both parties jumping at the chance. After talking about it a couple of times, one morning Sophia drove out to Long Beach in Dunedin and then, you know, proceeded to get her kit off for a two hour photo shoot. “There was one other person on the beach at the time and I was like, you could see my whole butt. I’m not going to be the only person who’s going to see me naked in my life, and that’s not a big deal. I had to separate myself from the whole ‘oh my God’ aspect of it all.”

It was freezing cold (when isn’t it?), which helped to distract from the whole nudity element. “It’s so much fun, exciting and nerve-wracking. I was mostly just cold; I didn’t really realise that that’s my body, it’s right there, it’s in your face.” Sophia recommends trying the experience with someone you trust, especially since photographs can be a touch more recognisable than Ye Olde Sketching (the way I draw, you wouldn’t be able to tell the difference between a horse and a person). Sophia is already keen to do another shoot in the future and is in awe of how the photos turned out. She acknowledged that, at the end of the day, “the guys developing the footage in the camera store are going to see my boobs, and you know what? I’m okay with that.”

Asia is a student in life drawing classes and assured me that none of it is sexualised, but just all “good fun”. Her only problem was that “the teacher did laugh at me for not being able to draw a willy. I got shy – it was pointing at me.” As someone who has drawn many a dick on high school white boards, I couldn’t relate. The secret is that testicles should be sisters, not twins.

So, with all of this advice under my belt, I got ready to undo my belt. “Just wear natural makeup,” I told myself as I heavily contoured my face. I debated contouring abs on then decided I hadn’t quite stooped that low yet. It’s winter, okay? We’ve all let ourselves go. “Just be chill,” I told myself, as I hyperventilated in the mirror. I took several shots of vodka, and stepped out the door.

And then I did it. Much like losing my virginity, there was no fireworks, no life changing revelations. It was a bit awkward and weird, lots of lumps and bumps. I didn’t particularly like my body more than before, but I didn’t dislike it any more, either. It was tiring, both mentally and physically, and by the end of it I felt like crawling into bed and never coming out. Would I do it again? No, it’s too much energy that I could be putting into things like Facebook stalking my exes. But am I glad I did it? Let’s go with a hesitant yes. Okay, one more time with feeling. Yes. I overcame my fears and went outside my comfort zone, and you know what? Maybe next time I’ll have sex with a corner lamp on. Like I say, baby steps.

Life drawing takes place in the university’s Evison Lounge, which Tom finds funny because it’s “the $3 lunch room, which I always thought it was really amusing because you have $3 lunch the next day and think, I was naked in this room last night, and nobody knows that.” Asia, meanwhile, revealed an explosive news tidbit: while there’s “meant to be a cloth put down for the life drawing model so you don’t get balls and stuff on the seat, models forget. [They] put their sweaty bums and vag on the seat and the tables where people eat $3 lunch, and I don’t know if anyone disinfects them.”

I sincerely hope you think of that next time you chow into some curried lentils – that’s not the only lentils that have been there. Yum!