Sarah Everard was abducted as she walked home from a friend’s house on March 3. A police officer has been charged with her murder. Now, police’s actions at a vigil held in her honour are in the spotlight. NZ journalist Laura Walters reports from London.

Clashes between police and protesters at a vigil for murdered UK woman Sarah Everard have sparked a discussion about law enforcement’s relationship with women.

Saturday night’s south London vigil turned violent after police attempted to disperse crowds they say were breaching Covid-19 laws. This led to police physically restraining protesters, in a way that’s been described as “manhandling”, and culminated in the arrest of four people.

Now, with trust further eroded, Scotland Yard is under pressure from activists and politicians, amid the terrible optics of pictures showing police pinning women to the ground during a vigil about violence against women.

And in an age when women are finding their voices through movements like #MeToo, police are staring down the barrel of a public reckoning over the role they play in protecting them.

Last week, a serving police officer was charged with the kidnapping and murder of 33-year-old south London woman Sarah Everard.

Everard was walking home from a friend’s house about 9pm on March 3 when she disappeared. Her remains were found days later, in Kent, about two hours away.

The marketing executive’s murder prompted an international discussion about male violence, and women’s safety. Women shared their experiences of being assaulted, harassed, and scared due to the actions of men. Much of the conversation has been push-back against oft-repeated victim-blaming rhetoric, which puts the onus on women to keep themselves safe.

In the immediate the wake of Everard’s murder, London’s top police officer Cressida Dick went to lengths to insist women were safe walking the streets. And that police were there to protect them. 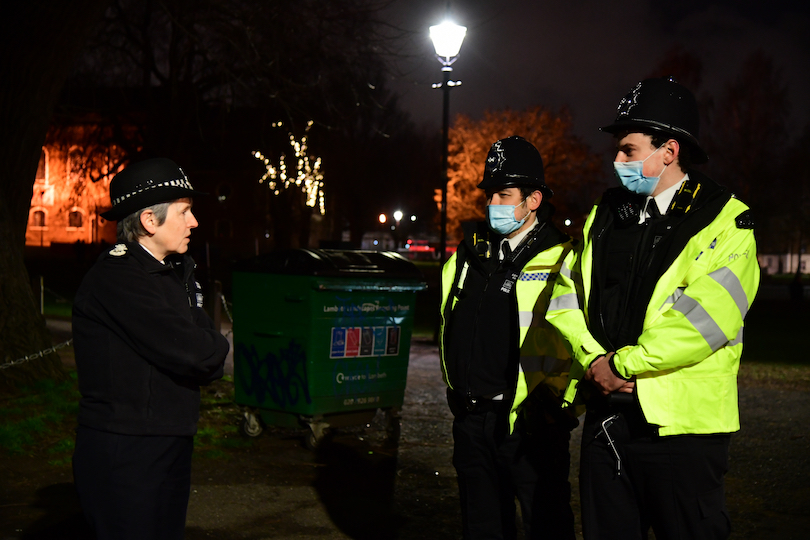 But in the days following, tensions between UK women and law enforcement have been rising.

Due to Covid-19 health concerns, Metropolitan Police refused to work with the Reclaim These Streets organisers who wanted to hold a physical vigil. And what began as constructive discussions with local south London police descended into a High Court battle between Reclaim These Streets and the Met.

Despite organisers officially replacing the physical vigil with an online event, hundreds of people turned out at Clapham Common – where Everard was last seen – in an act of defiance. Those who attended say the event started out peacefully, with police walking through the crowds during the minute of silence.

A New Zealander based in south London told The Spinoff the moment of silence was “beautiful”. “Police were just walking through the crowd keeping an eye on things.”

But the mood changed when the crowd started chanting and booing at the police, she said. An Australian, who lives in Clapham, said the escalation felt inevitable. “It felt like it was a pressure cooker and it wasn’t going to stay peaceful,” she said. “People were pissed off, and rightly so. But at the end of the day, I found more peace with Sarah Everard in seeing my neighbours lighting a candle for the 9.30pm doorstep vigil than I did by the time we left the Clapham Common vigil.”

Another New Zealander, who also lives in south London, said she was disappointed at how the event played out. “I have been following this case closely and have been affected this past week in an unexpectedly deep way.

“It was grief for Sarah, as well as seeing my friends and myself reflected in her,” she said. “The vigil was supposed to be an opportunity to show respect to Sarah and her family, and to acknowledge our collective grief.”

But others who attended the protest told The Guardian the confrontation was sparked by police. They said officers tried to stop the speeches, which were drawing crowds closer to the bandstand. Some police stepped on flowers and tributes on the way. When women protested police efforts to silence them, police shouted back, kicking off the violence.

One of the most notable images to come out of Saturday’s vigil was that of Patsy Stevenson being pinned to the ground. 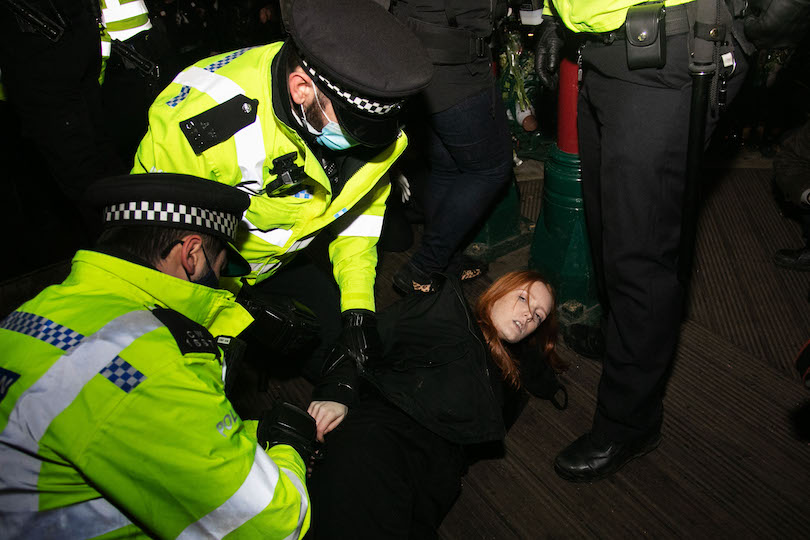 Protester Patsy Stevenson being pinned down by police at the vigil (Photo: Kristian Buus/In Pictures via Getty Images)

The striking image of the 28-year-old being held down by male police officers has become symbolic of the shocking turn of events.

“I was arrested by police for standing there, I wasn’t doing anything. They threw me to the floor… I’m five-foot-two and I weigh nothing.”

But police defended their response, with assistant police commissioner Helen Ball saying the arrests were made to “protect people’s safety”.

Hundreds of people were “packed tightly together”, posing a risk of transmitting Covid-19, Ball said.

Reclaim These Streets organiser Jamie Klingler said none of this would have happened if police had worked constructively to create a safe, healthy space for people to gather. “We were shocked and really really saddened to see videos of police manhandling women at a vigil about violence against women, by men,” she said.

The organisers have again requested to meet with police to discuss how law enforcement could enable women to “express their profound sadness in a way consistent with protecting public health”.

Other UK activists and politicians have also criticised the police response, with many calling for investigations, and some calling for Cressida Dick’s resignation.

On Sunday (UK time), home secretary Priti Patel announced there would be an independent investigation into the policing of the vigil.

Some of the footage circulating online from the vigil in Clapham is upsetting. I have asked the Metropolitan Police for a full report on what happened.

My thoughts remain with Sarah’s family and friends at this terrible time.

And Martin Hewitt, chairman of the National Police Chiefs’ Council, tweeted that he would “bring all police chiefs together” on Monday to discuss “what more we can do to better protect women”.

Dick said she welcomed the inquiry, saying the vigil was “fiendishly difficult policing”. But she brushed off calls for her resignation.

On Sunday, protesters again gathered in defiance of police, this time outside Scotland Yard, in central London.

London mayor Sadiq Khan, who has been highly critical of police over the past few days, put the issue into its broader context. “It is vital that these events are not allowed to undermine the powerful calls since Sarah’s murder for meaningful action to finally stop men inflicting violence on women,” he said.

The scenes from Clapham Common are unacceptable. The police have a responsibility to enforce Covid laws but from images I've seen it's clear the response was at times neither appropriate nor proportionate. I'm contact with the Commissioner & urgently seeking an explanation.

“It was clear before yesterday that there isn’t adequate trust and confidence from women and girls in the police and criminal justice system more widely. Further steps must now be taken to address this.”

It was this context, and history of mistrust, that women brought with them to the vigil on Saturday. It is more than 40 years since the first Reclaim the Night march, which was prompted by the Yorkshire Ripper murders and the police response, telling women to stay at home after dark.

The frustration and rage expressed on social media and in parliament showed women are tired of living in fear.

One of the New Zealanders who attended the vigil spoke about the importance of understanding the emotions at play going into the weekend.

“It’s really felt like there’s been a heavy atmosphere this whole week… where as women we feel the need to mourn not just Sarah and what happened, but also the bigger picture,” she said. “The freedoms we’ve lost by just being born a woman, the extra fight it takes, and the accumulative weight of all those small moments in our lives where we felt uncomfortable or harassed by men.”

Everard’s death brought back memories of those moments “like opening a stuffed closet and everything falling on top of you”. The vigil was supposed to be an opportunity to process this, and “put the items back in the closet one by one, looking at each item for what it is”. New Zealand Police has faced similar a similar reckoning regarding gendered violence, in the wake of the Louise Nicholas rape case.

Following the trial of the police officers accused of raping Nicholas, the institution changed the way it dealt with sexual assault allegations, and worked towards shifting its culture regarding gendered violence.

While the protest in south London descended into hostilities, thousands of others joined a peaceful, virtual vigil on Saturday evening. During the online event, campaign manager Jo Atkins-Potts said the past week had “electrocuted the world, because it speaks to the experiences of women everywhere”.

While women’s Equality Party leader Mandu Reid said the experience felt “visceral and personal”. “All women and every girl lives under the perpetual threat that what happened to Sarah could happen to any one of us,” she said.

And Bell Ribeiro-Addy, the local south London MP, said it was time for a “fundamental culture change”. Others, including the UK prime minister, lit candles and placed them on their doorstep. Reclaim These Streets also raised more than £500,000, as part of the online vigil.

The fundraising was initially planned to cover any police fines associated with hosting physical events, but organisers said they’d prefer to give the money to groups that were helping women.