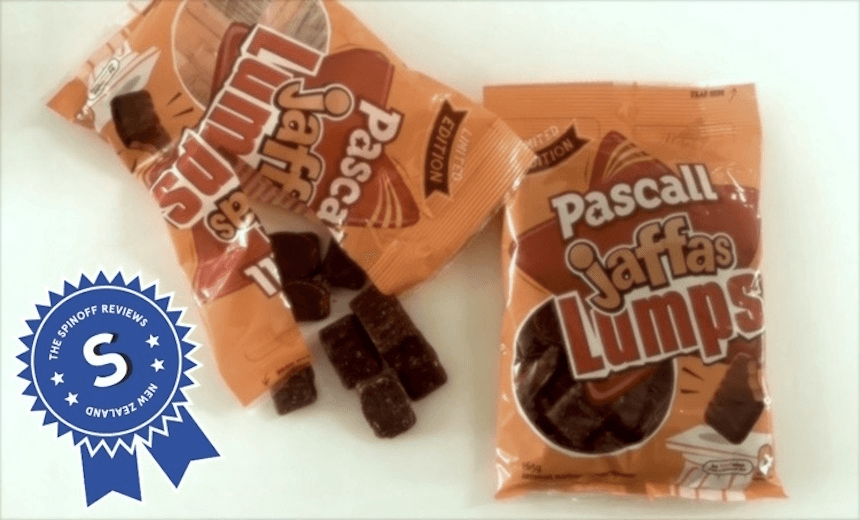 “Oh they haven’t, have they?” – Toby Manhire, Spinoff Politics editor, 9:15am

Oh yes they have.

Pascall – the confectionery company owned by Cadbury, which is owned by Mondelez International, which is shutting down the Dunedin factory where 350 people work early next year – has performed an emphatic mic drop on the sweet fusion craze currently sweeping the nation by fusing arguably the two most iconic New Zealand sweeties of them all: Pineapple Lumps and Jaffas.

Limited edition Jaffas Lumps takes the chewy chocolate-coated texture of Pascall Pineapple Lumps and replaces the filling with the vaguely orange-flavoured taste of Cadbury Jaffas. This is, at the very least, preferable to the other way around. Surely no one is asking for a pineapple-flavoured Jaffa.

A Jaffa-flavoured Pineapple Lump on the other hand? Sure. Why not. It’s just a chewy Jaffa. Tastes how you would expect it to taste. A nice postage stamp-sized sweetie to stick in your gob and experience a tiny respite from all the pain and misery in the world.

The first ingredient listed on the back of the Pascall Jaffa Lumps packet is sugar. The second ingredient is ‘inverted sugar’. Is this fine? I’m no Wendyl Wants to Know but presumably the inverted sugar cancels out the sugar and it’s fine. The third and fourth ingredients are vegetable fat and glucose syrup.

Look, we are clearly living in the end times. The future of Jaffas and Pineapple Lumps – and to that end Jaffas Lumps – is uncertain beyond the impending closure of the Dunedin factory where they are made. None of this could exist in a year’s time. Or worse, it could all be made in Australia and taste slightly different.

So get in while you still can. Don’t let the sneering cultural elite put you off. If you want to have a Jaffas Lump just have one. Who cares, have a whole bag.

Or if you don’t, don’t. If you’re of the opinion that neither Jaffas nor Pineapple Lumps were ever really thaaaat good and are merely venerated out of a weird mix of nationalism and nostalgia, that’s fine too. Despite what you may have been led to believe, it is not your patriotic duty to eat a Jaffas Lump.

“Don’t let me have any more” – Toby Manhire, Spinoff Politics editor, returning for a 4th helping of Jaffas Lumps, 11:01am

Good or bad: Don’t overthink it