What reasons did people list for opposing the vaccine? How does New Zealand stack up against the US? And what do we think about compulsory face mask-wearing? UMR Research executive director Stephen Mills on the company’s latest findings.

An online survey by UMR from late November found 74% of New Zealanders said they were willing to take a Ministry of Health-approved vaccine to prevent Covid-19 if it was available right now at no cost.

This compares to 63% of Americans who declared in a Gallup survey they were willing to take an FDA-approved vaccine to prevent Covid-19 if it was available right now at no cost. The US result was marked by strong political polarisation, with 75% of Democrats willing to be vaccinated and only 50% of Republicans. In an earlier Gallup survey from August, just 37% of Republicans declared a willingness to be vaccinated.

In New Zealand, there was little difference by party vote, with 78% of Labour voters and 74% of National voters willing to be vaccinated. On smaller samples, Act (75%) and Green (71%) voters were in line with these figures.

The New Zealanders keenest on vaccination were from Wellington/Wairarapa (81%) and over 60-year-olds (80%). 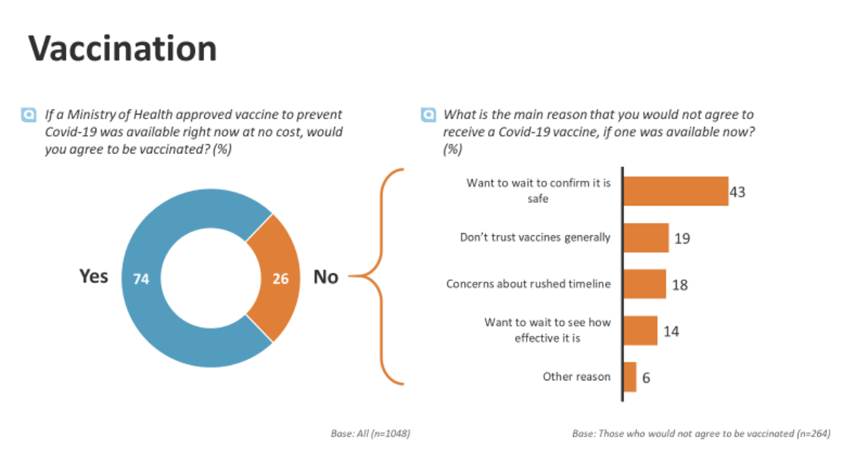 Of the 26% who declared they would not take a vaccine, most wanted to wait until confirmation it was safe, expressed concern about the rushed timeline or wanted to wait to see how effective it was. Meanwhile, 19% (about 5% of all those surveyed) were opposed to vaccination in principle.

Looking at other ways of currently minimising Covid-19: Women were a little more willing to comply with measures than men, especially using the Covid Tracer app (58% vs 51%) and avoiding crowded public places (50% vs 43%). New Zealanders were mostly behind the compulsory wearing of face masks on all internal flights in New Zealand (83%) and on public transport (81%). We were more divided on having to wear face masks in supermarkets and other shops, with 42% in favour and 38% opposed.

Meanwhile, 49% were opposed to compulsory wearing of face masks in places of work, with just 27% supporting the measure.

Aucklanders were again the biggest supporters of compulsory face masks.

Labour voters were also more supportive of compulsory wearing of face masks than National voters, with the biggest differences for supermarkets and other shops (47% versus 37%) and in places of work (32% versus 21%).