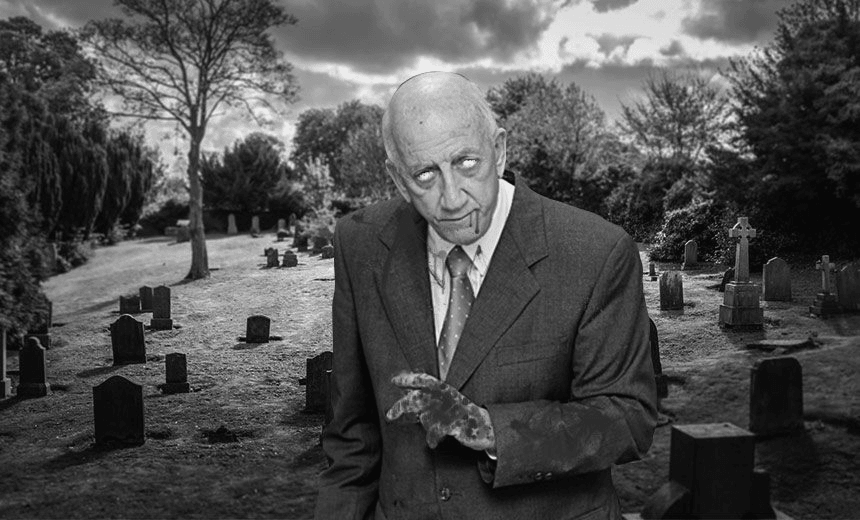 Opinion: Bob Jones can now descend back down into the abyss whence he came

Knight of the Realm Sir Bob Jones rose from his crypt yesterday and immediately yelled the first racist thing that came to mind. Hayden Donnell asks why we keep enabling this sad bully.

The mummified remains of Bob Jones spluttered to life yesterday, coughing up dust and cat fur and dialling into Newstalk ZB. Jones was enraged by a story he’d seen about a homeless man in west Auckland who claimed to receive $150 a day begging. His call was received by talkback host Chris Lynch, a slightly tidier Boris Johnson whose former CTV show Lynched with Chris Lynch featured a mock lynching in its opening credits.

Jones said it was a disgrace that “fat Māoris as they mostly are” were allowed to beg for change on the streets where he sometimes deigned to walk.

This isn’t surprising. Jones is a corpse compelled by witchcraft to say the most obviously racist thing in any given situation. The only joy he can extract from this mortal plane comes when he’s raining blows on those he believes are beneath him, be they beggars, flight attendants, reporter Rob Vaughn, or victims of indecent assault who he believes have themselves to blame for making the “silly” mistake of walking in a park.

Of course that’s not true. Not everyone can become a six foot pile of dry skin flakes brought to life by the power of pure hate. There are a huge number of structural and personal reasons people struggle, many of them put in place by people very much like Bob Jones. Hopefully most of us have enough empathy to understand that. Unfortunately the truth is many of us don’t.

In the distasteful Herald poll asking readers whether they agreed that beggars should be banned, 75% said yes. Thousands more liked the Herald’s post on Facebook.

This is not just a dial-a-racist sermon from an undead spittle-soaked narcissist. Too many of us don’t see other people as people, with complicated lives and reasons for being the way they are. Instead we see them as annoyances; things to be ignored and stepped around on our way to work. We want our lives cleared of these uncomfortable intrusions into our morning coffees. If we look deep enough into most of our middle-class psyches there’s a hint of that belief: “I earned everything I have. I deserve this.” The only alternative being the truth: that we’ve profited from a system that mostly keeps people who aren’t like us poor.

And so, while it’s imperative that Jones returns to his crypt until the dark hands drag him back into the abyss, it’s also true we are often little better. For almost 40 years we’ve accommodated this bigot in large part because he’s funny, and he says what many of us are thinking. So screw him, yes. But screw us as well, and maybe doubly so. He’s just a sad bully desperate for attention. We should know better.