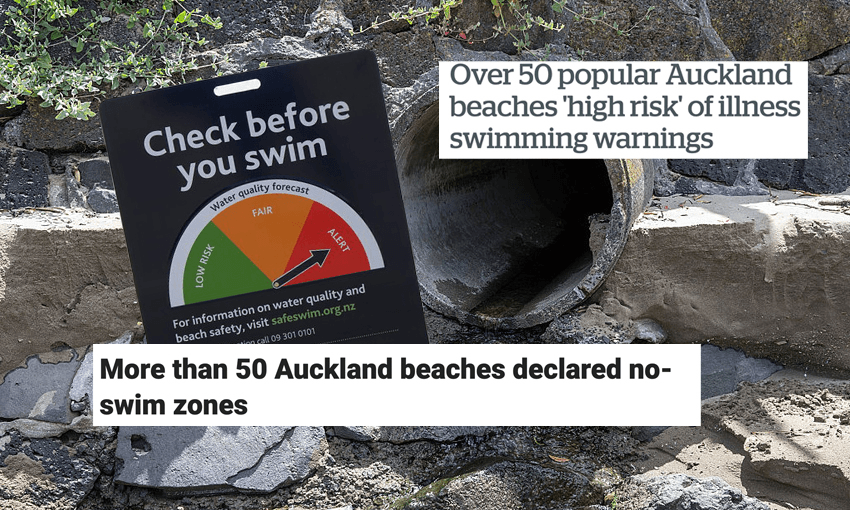 Ah, the beach. A staple of the New Zealand summer. Unless, of course, you’re based in Auckland and it’s raining. The start of 2021 has been a lot like every other New Year: headlines flooding in to warn prospective swimmers that Auckland beaches have become “unsafe” due to “high levels of faecal bacteria”. As in literal shit. Human shit, to be specific.

Recently, more than 50 beaches around the region were deemed unsafe to swim in as a result of deadly floaters making their way in from the city’s sewage following a weather event.

So, what causes it in the first place? And when – if ever – will our beaches stop being so shitty? I set out to understand the faecal phenomenon and ask whether it’s a problem that will persist for summers ad infinitum.

It’s fairly common knowledge that a lot of Auckland’s existing waste and stormwater infrastructure is combined, leading to overflows that often end up precisely where they shouldn’t be: the sea.

“Rainfall happens at very high intensity so if you want to have a system that can handle all the rain you have to have really, really big pipes and really, really big wastewater treatment plants,” Auckland University environmental engineer Jakobus van Zyl tells me. “It’s better to keep them separate, but some of the older plants in Auckland do have combined systems. The problem comes when the sewer system can’t handle the capacity.”

Spillages happen when the flow in the sewer is higher than the capacity of the pipe, van Zyl explains. “The pipe can’t handle the capacity so it goes higher and spills out of manhole covers and places like that. One of the big issues is that when it rains you always get some of that rainwater in the sewage system, even though the systems are separated.”

Auckland Council Healthy Waters general manager Craig Mcilroy says that the combined systems – which can be found at a lot of the Western isthmus beaches – are designed to overflow when there’s wet weather. And it doesn’t take much. “Probably no more than one millimetre of rain is enough to trigger one of those overflows, which is why a number of those beaches have permanent no swim signs. None of that will be sorted until the Central Interceptor is commissioned in 2026.”

Auckland Council is pinning a lot of its hopes on the Central Interceptor, a $1 billion-plus project that will carry wastewater flows from parts of the city out to the Māngere treatment plant. Once completed, it’s projected to decrease overflows in Auckland by about 80%.

How long have we known about the problem?

Most of Auckland’s water woes come down to the fact that the city’s wastewater and stormwater infrastructure is old. Like, really old – some of it has been around for more than a century. So it’s most definitely not a new problem. While that may cause some to lay blame on our city’s planners of yesteryear, urban design expert Lee Beattie says that’s not the case. “If you think about the Cox’s Bay catchment – the amount of effort that’s gone into trying to fix that – it fundamentally comes back to the fact that we haven’t separated stormwater and wastewater and the infrastructure is just so old and needs replacing. A lot of these issues come from that.”

He adds: “If you look at where those beaches are, a lot of it are those older parts of the city where we need to invest in infrastructure upgrades.”

And it’s not a unique problem. “Look at Wellington,” says Beattie, referring to recent problems with underground pipes in the capital. “For the newer locations, it’s to do with the cost of infrastructure and the increased urban development that comes with it.” Beattie compares city infrastructure to maintaining a car, saying that constant work is needed to keep things operating smoothly. “The system was built a long time ago and was fit for purpose at that point in time. It’s not poor planning, it’s ongoing maintenance and putting aside the financial requirements to do this sort of stuff that’s really expensive to do.”

Watercare’s acting chief operations officer Anin Nama agrees that the 100-year-old system was perfectly adequate when it was built. In the ’60s Māngere treatment plant was built, which saw the first improvement in terms of water quality. The next lot of work, which is ongoing today, is physically checking peoples’ property to ensure their pipes are separated into both waste and stormwater, Nama says.

I ask van Zyl whether he thinks local government needs to take responsibility for the annual problems that occur on Auckland beaches. It’s not quite that simple, he says. “I think it’s unfair to just say that they’ve been negligent unless we can compare to other cities over time and see that it’s so bad that they should have picked up on it earlier.”

He adds: “They only have so much money so if they spent more on this they would have spent less on other things. I think it’s an impossible job.”

OK, so what’s being done to fix the problems?

Here’s where it gets complicated.

“What we are finding, right across the region, is that people are putting stormwater into the wastewater,” Watercare’s Anin Nama says. “When you do that, it inundates the wastewater and we get overflows which go to the environment. We’ve got illegal connections that are happening… where people have plumbed their wastewater into the stormwater.”

There’s no silver bullet nor any other sort of cliché that will make Auckland’s water problems evaporate in an instant – but the Central Interceptor may be as close as we can get.

Nama calls it a gamechanger. “Those are my own words. It will take the flow that used to go into the environment into the pipe and then into the Māngere treatment plant, effectively becoming a storage tank,” he says.

“However, there will be times when that tank is full because it can’t collect every rain event. The Central Interceptor is designed to protect itself and not overflow, but approximately two to six times a year there will still be overflows that go off into the environment – compared to 52 times a year [at the moment]. It’s a very important project.”

The Central Interceptor sounds great! But is it going to be enough?

In all honesty, probably not – at least not enough to fix things entirely. Improving Auckland’s infrastructure to the point where 100% of beaches are swimmable 100% of the time is, effectively, impossible – a claim that everyone I spoke to agreed with. But Healthy Waters and Watercare have a goal. “What we’ve defined as ‘good’ is 95% of beach availability,” says Craig Mcilroy. “There’s no magic bullet, it will never get to 100%, so my view is we need to define success as 95%.” Cox’s Bay, for example, currently has a permanent no swim sign. Mcilroy thinks even that beach will eventually become swimmable 95% of the time.

Part of the problem, as van Zyl explains, is the ongoing growth and densification of Auckland. It’s hard to predict what the city will look like in a decade, let alone another century. “I think to say that [spillages] can be completely avoided, to never have them, is basically impossible. It’s all about cost and the risk,” he says.

I ask Nama and Mcilroy to put a date on when they hope to reach their goal. “It won’t be until we’ve at least done the Western and Eastern isthmuses, so once we remove those permanent non swim sites that could be a plausible goal within the next 20 years,” Mcilroy says.

“It is a decade or two programme because we’re talking large amounts of work on every property that needs to be separated. It’s a forensic exercise, working on people’s private property,” adds Nama. “I don’t think we are behind where we should be in the investment.”

So, buckle yourself in for another 20 years’ worth of headlines about Auckland beaches – there’s a long road ahead, but at least we know where we’re going.