The comedian’s Instagram felting projects have become so closely tied to our lockdowns that they’ve made it to Te Papa. He tells Alex Casey what is he planning next.

It began with a humble felt hedgehog and it ended with a giant felt hat adorned with felt woodland critters, felt hand sanitizer, felt bags of flour, felt Ashley Bloomfield and felt Siouxsie Wiles. Throughout our various lockdowns, comedian Chris Parker’s hypnotic felting videos on his Instagram, and the resulting fuzzy creations, became symbols of calm and routine for many. In July last year, they earned their place in history, with the felt hat and a giant regal portrait of Parker wearing said hat accepted into Auckland Museum and Te Papa, respectively.

Chris Parker and a copy of his Te Papa portrait, over Zoom.

Now, as New Zealand finds itself in another nationwide lockdown, Parker has revealed to The Spinoff that he intends to felt again. “I’ve got all this stuff out,” he said over Zoom while unpacking a baby pink Von Dutch handbag full of small felting tools, “because as soon as I made it back home, I had all these messages saying ‘when’s the felting coming?’” After reading all the messages and hearing the call, Parker is already ruminating on what his next lockdown felt project will be.

“These things have to happen naturally,” he said. “From my experience of felting the hat, these things have to originate from your core truth. They just can’t be manufactured for the people.” Whereas the nationwide lockdown of April 2020 gave us celebrity public servants (resulting in felt Bloomfield), and Auckland’s September 2020 lockdown was during the height of the election (resulting in felt orange guy and felt Chlöe Swarbrick), Parker is unsure about how this lockdown will manifest in felt. Parker shows off one of his less successful creations

“What is the sign of these times? I was thinking about maybe making a miniature of my entire house out of felt, but then I was like ‘no’… I feel like this lockdown has a really different energy, and I am still trying to work it out.” Although he’s unsure on exactly what he is going to make, Parker has a plan for where his next creation will be headed. “I thought I might make something and then at the end of lockdown, whenever that may be, auction it off on Trade Me and give the money to charity,” he said. “I feel like that’s probably the best outcome this time.”

People often approach Parker to tell him that his content got them through previous lockdowns, which he chalks up to the “mindless” nature of his felting videos (him, alone, stabbing repeatedly at wool while chatting). “It is the dumbest shit,” he said. “It’s nothing. It’s not commenting on anything, it’s just the wool and the stabbing, but I think people like to just lie in bed and watch it and think about something else for a while.” 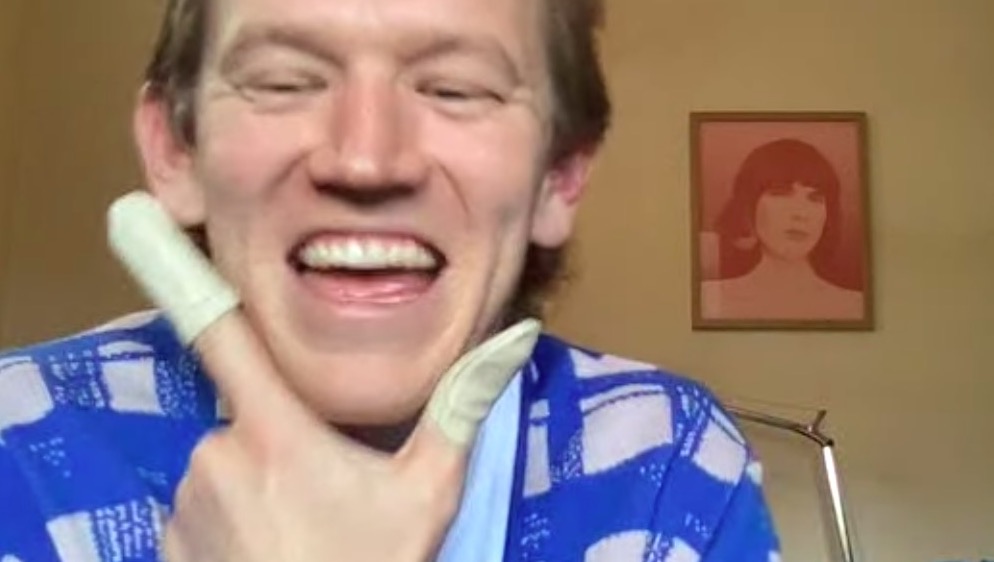 Parker shows off his felting gloves on Zoom

Although he doesn’t feel pressure to maintain his Instagram comedy content, his newfound audience over the past year is not something Parker takes lightly. “You forget that there’s a lot of people out there who are lonely and scared and looking for some kind of light relief. To be able to provide that for people is buzzy, but it’s also really nice to apply my very limited skillset during a time like this.” And, as his enormous bag of felt suggests, he’s more than happy to provide his services to the people.

“I’m not good at anything else, so I thought if I can make people laugh just once during the blur of a lockdown day, then that’s good enough for me.”