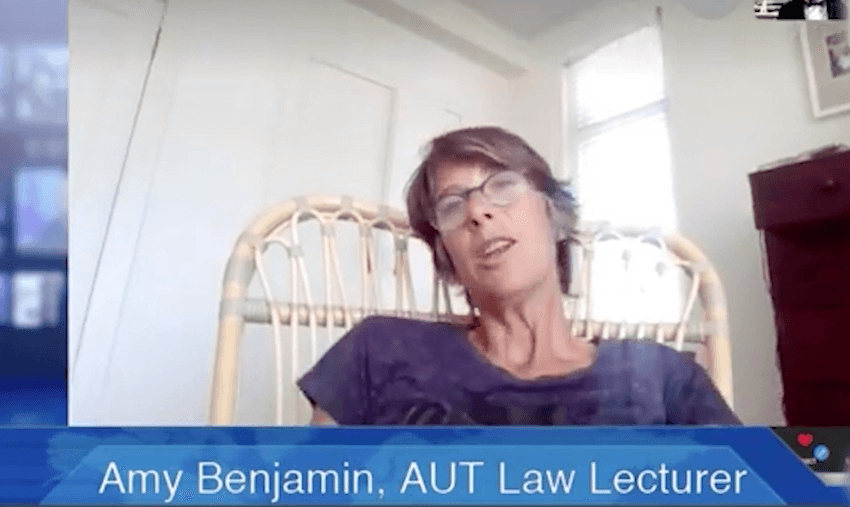 Exclusive: Amy Benjamin, who has resigned from AUT, made claims about the 2019 Christchurch terror attack on a livestream hosted by conspiracy theorist Vinny Eastwood. Stewart Sowman-Lund reports.

A controversial New Zealand law lecturer who alleged the 2019 Christchurch mosque attack was a “false flag” has resigned from an Auckland university.

Amy Benjamin has been an outspoken critic of the government’s Covid-19 response since the delta lockdown, often going against the scientific consensus on the pandemic. She’s also backed false claims that the 2020 US election was stolen from former president Donald Trump and has been described as a “9/11 truther” regarding a paper she wrote about the attacks.

This week, in footage viewed by The Spinoff, Benjamin appeared on a Facebook livestream hosted by conspiracy theorist Vinny Eastwood. During the broadcast, Benjamin appeared to suggest the Covid-19 pandemic was a hoax and called on New Zealanders to “stand up and fight”. She also commented on the government’s gun buyback scheme and the 2019 terrorist shootings at two Christchurch mosques that resulted in the death of 51 people.

“False flag” theories are popular among conspiracy theorists to suggest a government has orchestrated an attack itself but pinned the blame on another as a pretext for domestic repression or foreign military aggression.

When first approached by The Spinoff, AUT said it was unaware of Benjamin’s comments about the Christchurch attack. However, in a brief statement sent through this morning, a spokesperson confirmed Benjamin was no longer employed by the university. “AUT does not endorse the views expressed by Amy Baker Benjamin and we require our staff to clarify the opinions they express are their own,” said the spokesperson. “We take steps to ensure staff are aware of their rights and obligations. Amy has resigned from AUT.”

At the end of her appearance on Eastwood’s livestream, Benjamin appeared to distance her comments about Covid-19 and Christchurch from her role at AUT. “I should say that the views I’ve expressed are not those of my employer, meaning AUT University,” said Benjamin, laughing. “There’s no real need to say that because I think it’s obvious but I think they like it when I say that.”

It’s not the first time Benjamin’s opinions have attracted controversy. In August this year, when delta first spread into the community, Benjamin appeared maskless at a protest rally and described the level four lockdown as a “crime against humanity”.

Benjamin has also been a strong supporter of Donald Trump, claiming last year’s election was rigged against him. Throughout Trump’s presidency and campaigns, Benjamin made appearances on Three’s The Project and Newshub, and on Stuff. In January, she told Newshub the former president was not to blame for the Capitol riots. “I think there were tens of thousands of people – I don’t know the exact number – and they were all peaceful,” said Benjamin. “It looks like there was a small group that went up to the Capitol and decided to take matters into their own hands.”

Since the Covid-19 pandemic, Benjamin’s interests have turned to the government’s response to the crisis. “I’ve been following Covid with interest… I consider it to be a medical false flag,” she said during Eastwood’s broadcast. “It’s a worldwide fight of governments against their citizenries. These national governments are being orchestrated by an international crime syndicate. Trudeau from Canada is a puppet, and he’s a puppet just like sinister Cindy is a puppet. And Biden is a puppet. The mastermind is this group… you can call them the cabal,” she said.

These so-called “national puppets” are being directed to go against their citizenry, claimed Benjamin. “You have to stand and fight here if you’re going to fight.” The pandemic was also “introduced”, said Benjamin, in order “to justify mail-in ballots, which would be used to steal the [US] election” from Trump.

On being approached for comment, Amy Benjamin said she had resigned from the university two months ago for “personal reasons”. AUT did not confirm this, saying it was unable to provide details on an individual’s employment.