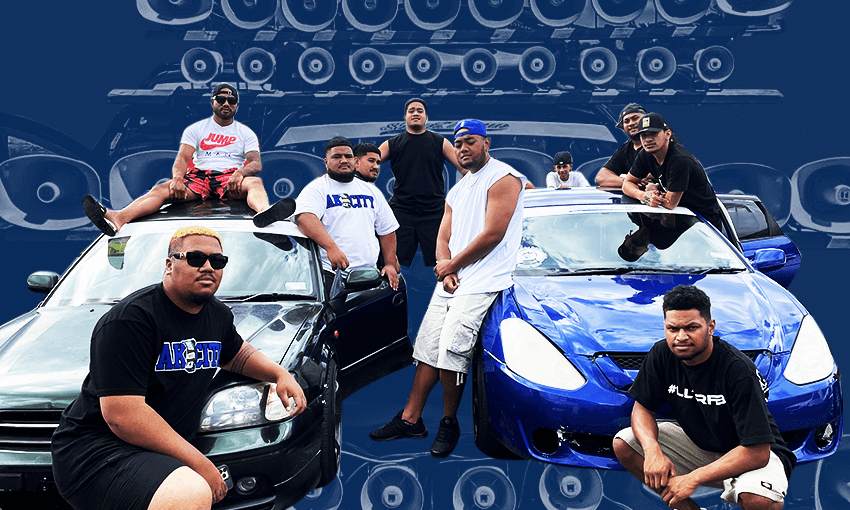 To some they provoke nothing but contempt, but those who compete in siren battles around south and west Auckland say it’s a ‘brotherhood’ giving a group of primarily Pacific youth a positive alternative to night clubbing and gangs.

It’s a balmy Sunday afternoon and I’m waiting for my interview subjects on a quiet industrial backstreet in Māngere, having just hit some golf balls at a nearby driving range.

The stillness is broken by a grumbling line of six or seven cars approaching from the far end of the road.

After they come to a halt in an empty parking lot, about 10-15 strapping young men jump out of their vehicles, greet each other warmly, before one of them beckons me over for our chat.

Paul Lesoa, a softly spoken Māngere-born-and-raised Sāmoan sporting a splash of bright yellow hair, is one of the founders of S.W.A.T. Team. It stands for Switching Without A Trace, referring to the group’s ability when it comes to “switching” or playing their siren jams.

Siren jams or beats are a unique and relatively new style of music you may well have heard at 4am in your neighbourhood, or via Manurewa’s Jawsh 685’s viral track ‘Laxed (siren beat)’ on TikTok or in the background of Jason Derulo’s hit song ‘Savage Love’. The genre consists primarily of remixes of high-pitched reggae music played over horn speakers or public address systems, which adherents call “sirens”, attached to cars or sometimes bikes. These groups battle each other at all hours of the night, garnering a fair amount of negative publicity as well as some confusion, given Celine Dion’s ‘My Heart Will Go On’ is one of the samples of choice.

But Lesoa says this emerging subculture, which he estimates includes around 20 Auckland clubs and up to 5,000 adherents and followers, judging by how many turn up to an event, has been grossly misconstrued.

“I guess the biggest misunderstanding is where we get our sirens from. We either buy them from overseas or from some suppliers in Penrose. There are a minority who might steal products, but the vast majority do it legally,” he says.

“Basically everyone has a hobby and while our hobby can be quite disturbing and we understand how disturbing it can be, we just want our own proper, safe space away from people to do it.”

To some, a large group of guys congregating around cars late on a Saturday night might look intimidating. But Lesoa says this activity is actually driven by a desire to stay out of trouble and express creativity.

“We just love music, we love dancing, and doing this is better than night clubbing or drinking in a bar in the city, where there’s fights etc.”

It also requires a high level of technical skill, given the set-up means wiring and soldering multiple sirens and amplifiers to frames that sit on and around the cars, along with the ability to sample and produce dance remixes that match the pitch and tone ideal for these types of instruments.

Mark Leleifi is another leader within the group. He says their crew includes welders, mechanics and those working in manufacturing, and while he works in road construction, a career as an electrician could well be on the horizon.

“I see the guys who set up the electrical power poles and a lot of what they do is similar to what we’re doing with our sirens, so I could see myself working for Vector or North Power or jobs like that one day.”

He says a recent battle required two weeks of preparation, working long hours into the night to hook up 40 sirens and 10 amplifiers to his car.

“Each siren costs $80 to $100, so with the amplifiers and other gear it was probably worth around $7k for the whole stack.

“But for us, it’s just our way to express ourselves and our love for music. Plus for a lot of us, we would rather wire up a car than go clubbing or partying. However it’s kind of hard at the moment because the police and the council are against us.”

Lesoa explains the reason Celine Dion is so popular is not her heartfelt lyrics, but the high treble content of her music.

“We hold battles and compete for different titles and categories. The battle involves three rounds which are scored by judges and one of the main things judged is the clarity – so any distortion or reverberation will make you lose.

“Celine Dion is popular because it’s such a clear song – so we try to use music that has high treble, is clear and not much bass. Reggae is our go-to as it has nice beats and doesn’t sound distorted.”

Lesoa says they’ve tried to contact Auckland Council to find out what they could do to get permits to hold events that won’t upset residents, but so far “it’s been hard to get someone to take this seriously”.

“Everyone has their own hobby and other hobbies get their own space so all we want is our own space, so we can go somewhere and not get fined, not get in trouble and then go home.”

Having just left a driving range, which has been set up away from houses and businesses – wisely, given my inaccuracy and that of many of my fellow hackers – I can’t help wondering if he has a point. To further illustrate that point, after misfiring hundreds of balls around a massive paddock, many of us will then head off to an enormous piece of council-subsidised prime land in the middle of the city that can only be used by other golfers to live out our Tiger Woods-inspired dreams.

Lesoa says being in a siren club is more than just a hobby, as it has the potential to create positive change among a demographic more known for issues like gang violence and unemployment.

“You’d be surprised how talented and creative these guys are,” he says.

“It’s not easy wiring all these sirens together and there’s also real camaraderie in learning it and helping each other out. It keeps guys off the streets, it keeps guys out of gangs, and it’s a brotherhood here. And for some they’re now thinking, ‘oh, maybe I could make a job out of this’.”

But judging by the response from Auckland Council regarding making accommodations for these groups, it seems there is still a long way to go before siren clubs receive similar support to golf, or something equally noisy like off-road motor racing, which has the use of an isolated council-owned field by the airport.

James Hassall, Auckland Council’s general manager for licensing and regulatory compliance, provided a written statement stating that clubs would need both the permission of local boards and resource consent, as the noise can breach the limits set out in the unitary plan.

“The council has received some enquiries about holding ‘siren clubs’ but as yet, none have resulted in an application for an event to be held legitimately.

“There have been numerous complaints over recent years from neighbouring properties when noisy gatherings take place informally on public streets or vacant lots.

“It is important to note that noise limits apply across the Auckland region, even in areas which might be considered remote.”

And according to a Māngere-Ōtāhuhu Local Board spokesperson, no formal request has reached the board, “however they’ve received a number of complaints from community about the noise problem at odd hours”.

“The group is welcome to reach out to the board through formal channels such as a public forum at our business meetings, but the board is keen to understand how the group plans to mitigate the noise issues.”