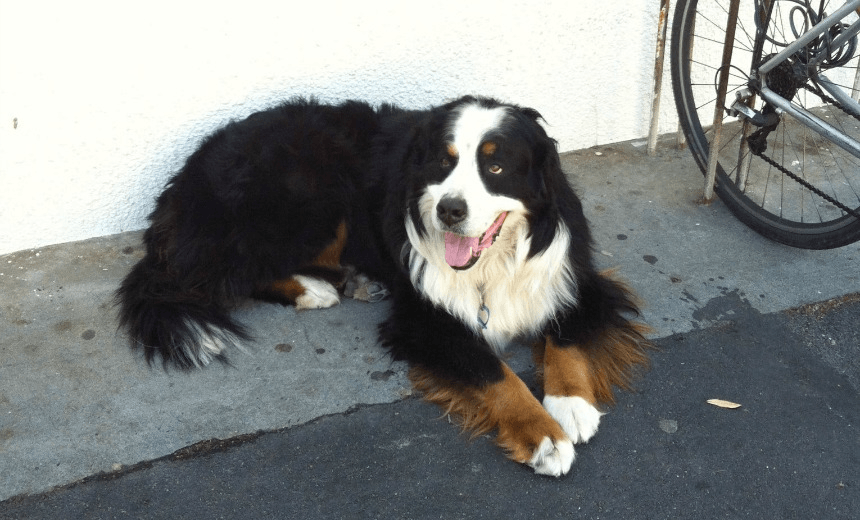 Obituary: Goodbye to Bernie, the goodest boy in Wellington

It’s true of Wellington that we have to talk ourselves up desperately to stay here. Yes the weather is garbage and there’s the constant threat of earthquakes and no sodding international musicians will perform here, but we’re still the coolest little capital – our craft beer is better than anyone’s, the coffee here is the most artisanal, we have the most restaurants and bars per capita, and we all wear black whether as default or design or as armour but, we insist aggressively, we’re above any other city in the country.

Let’s face it. Wellington is tiny: basically three streets linked by all seven of your exes who are all dating each other and talking about you at any given moment; on a Tuesday night there’s about three places serving late; if you go to a gallery opening or a book launch there are the same damn people there, and without realising it all of your friends have moved to Melbourne to continue this exact same trajectory but on a slightly larger scale.

But then there was Bernie. Bernie the beautiful Bernese Mountain dog. The goodest boy; the beloved son of the Capital. It was dogs like Bernie who made me glad that Wellington was so snug, so compact. It was so easy to run into him just living his life, paws out on the ground in front of the Freyberg pools or wandering about blessing every inch of ground that he gently padded upon. I had this idea in my head that seeing Bernie was a good luck charm, that if I ran into him it meant the rest of my day was going to be brilliant. Generally, this was true.

Way back in April of 2012 I was in a sweaty state of waiting for Penguin, who had offered me a book deal, to confirm said book deal. On the day they were due to contact me, I happened to walk past Bernie on Wakefield Street and it felt like as good a sign as any that my life was moving on up. That afternoon Penguin called me to say the book deal was going ahead: I gave a moment of thanks to that enormous, galumphing, friendly dog. Did he actually have any effect? Who gives a fuck; he was embiggening everyone’s lives just by existing.

Let’s face it: life is kind of awful in 2017. American politicians are tearing apart everything and New Zealand politicians aren’t showing a ton of gumption in response, the bees are dying, nuclear war may well be upon us, earthquakes keep happening and the dystopian novels I studied in my BA are becoming more and more real with every minute that rolls by. With that in mind: it’s the Bernies of the world who make everything better.

Bernie gave so much and asked so little. He had massive patience for those who wanted to pat him, take a selfie, boop him, or generally behold his fluffy majesty. His beautiful enormity, kindly nature and general doggy goodwillness made the frankly often insufferable Wellington landscape a beautiful thing. If you happened to run into him then your day was better. We could all learn so much from him: he was truly the best of us and he will truly be missed.

If you happen to be lucky enough to own a dog yourself then hold them a little closer, and keep in mind that you never know whose life you’ve improved simply by having your dog walk past them. Dogs are just that good, and Bernie was one of the goodest. Rest in power, Bernie: Wellington will never quite be the same, but Heaven has easily gained an angel.